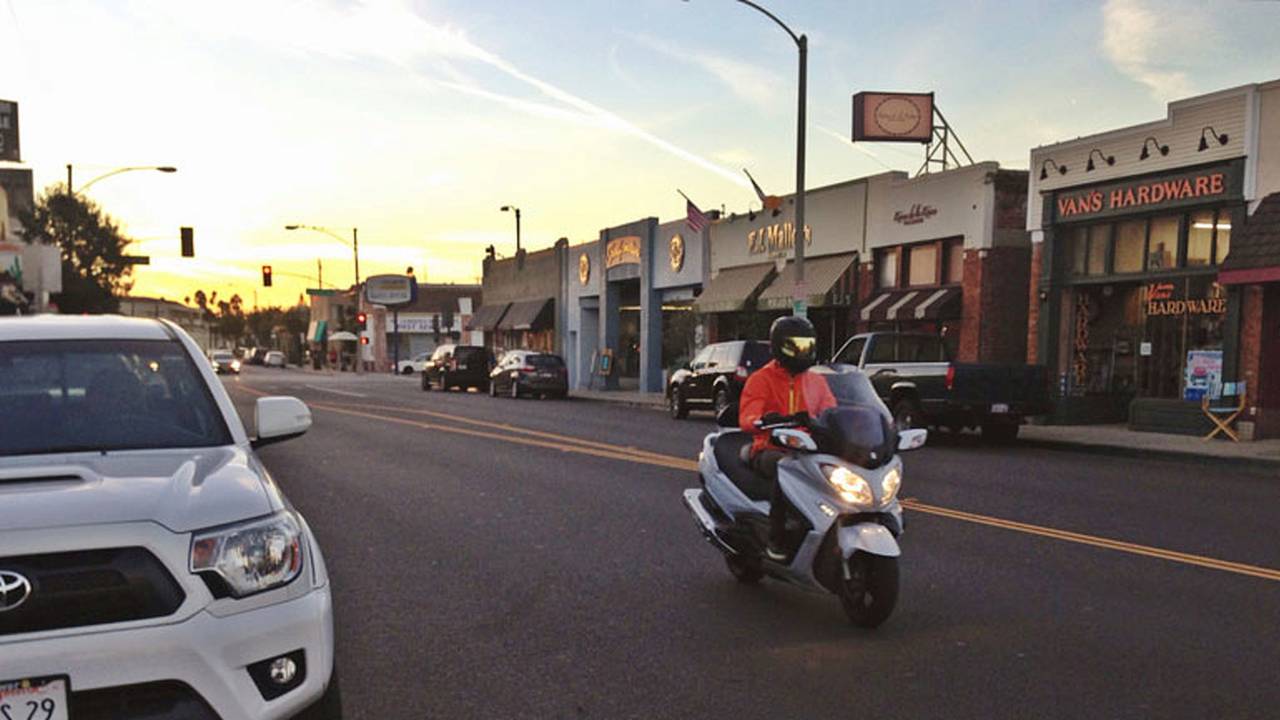 After living with the 2013 Suzuki Burgman 650 ABS for a month, we have a renewed love for scooters.

The 2013 Suzuki Burgman 650 ABS is part scooter and part Goldwing, capable of commuting around town or long trips. We’ve had the Burgman for a little over a month now and have learned to love the (maxi) scooter life.

The Burgman is not the coolest bike in our office currently, nor is it the best at really anything….except making life easy. I’ve used ours to pick up Chinese food, make quick grocery store runs, return a pair of shoes to the Nike store, and make trips from Orange County to Los Angeles to see concerts (The 1975 are fantastic live btw).

It’s a fairly large scooter, yet the handling is quick and easy while managing to remain stable at high speeds. It’s equally at home on quick errands as it is on the freeway, and operating it in either situation is far easier than it would be on a regular motorcycle.

A few buddies wanted to go for a ride the other day and I met them on the Burgman, opting for fuel economy overthe gas guzzling Griso. They laughed when they saw it and asked if I’d just come from shooting a Jetson’s commercial, but were shocked when I managed to stay right on their tail the entire ride and then locked my helmet, jacket, and gloves under the seat when we stopped to eat.

The Burgman is far more at home on the freeway than any scooter should ever be. My girlfriend was shocked when she asked what I’d ridden up to her house (a 25 mile commute) and I told her it was a scooter. She called me a liar and went to the window to see what I’d really ridden, and then asked, “Isn’t that dangerous?” Nope, not at all (unless you consider a ride so easy it leaves you a bit unengaged, dangerous.) Seriously, it’s like sitting in a recliner.

Not many touring bikes fit in my garage this well.

It isn’t perfect for city life.

My biggest issue with the Burgman was with its slow speed handling. At 32 inches wide, it’s a lot of scooter. While narrower at the middle section than the mirrors and bars, the floorboards are still fairly wide which make putting your feet down a little unsettling. The width, in addition to the extremely quick slow steering, make filtering stressful and it’s a far reach to throw a stabilizing leg down.

The Burgman isn’t for everyone.

The Burgman is a wonderful reminder about all of the things that are great about scooters. The added range brought about by the larger engine and the increased footprint is a nice exercise in engineering, but both are really only useful in times we’d rather be on a regular motorcycle, especially when you factor in the Burgman’s 2014 model price of $10,999. While it’s great that you technically can tour on a scooter, we aren’t sure we want to exclusively and would rather have our scooters the way God intended them: compact and useful for riding around town. If a maxi-scooter fits your life, the Burgman is one of the best; we just have a hard time seeing it being your best option unless you have very specific criteria.