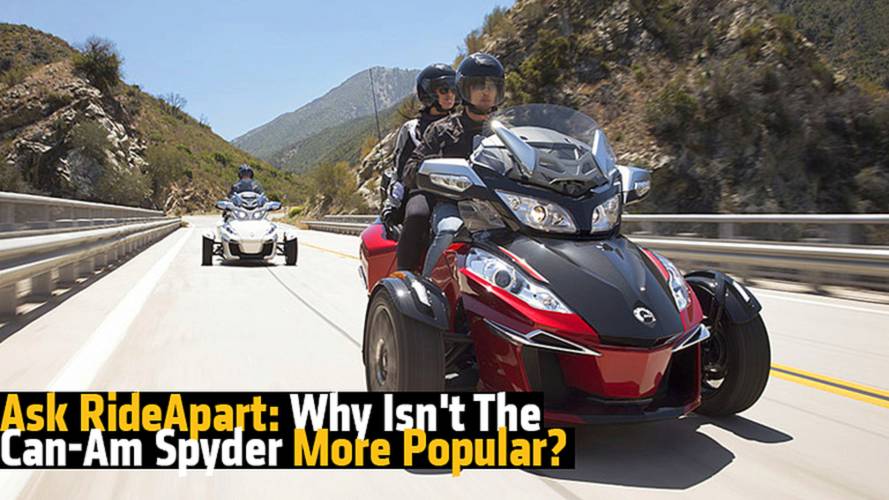 The Can-Am Spyder appeals to a wide variety of riders. So why aren't more people buying them?

The question has been debated among riders ever since the first Can-Am Spyder rolled off the assembly line in 2007: is the Spyder a motorcycle? We may finally have an answer to that question. A bigger one still remains: will the Can-AM Spyder – and other vehicles like it – ever attract more than a fringe audience?

A rare photo of the Spyder's progenitor, the Phaeton.

Etymologists would argue that the word “motorcycle” offers no help – “cycle”, after all, makes no reference to the actual number of wheels the thing has, only that it has them. (The word “cycle” is derived from the Greek word kuklos, which means “wheel”.) In fact, the first use of the term might actually be considered a win for the “Yes, A Spyder Is A Motorcycle” camp. In 1887, inventor Lucius Copeland looked to sell a stream-powered vehicle called a “motocycle”. Not only was this the first use of the term that would eventually become the word “motorcycle”, Copeland’s Phaeton Moto-Cycle actually had three wheels – in the same Y-configuration that today’s Spyder has.

That said, it seems that the folks at BRP, parent company to the Can-Am Spyder operation, have answered the “is it or isn’t it” question. And that answer - delivered via the official Can-Am Spyder Facebook Page - is an emphatic “no”.

I’ve long been fascinated by the Spyder, and I recently had the opportunity to take one for a quick spin; one of my local bike shops was a stopping point for the current Can-Am Spyder Demo Tour. We recently reviewed the trike; RideApart writer Bruce Speedman had the chance to spend a considerable amount of time on one, much more than I’d get during my demo ride. So my goal wasn’t to write a hardcore review. Rather, I wanted to get a sense for what riding one is like, and by doing so see if I couldn’t figure out why the Spyder isn’t more popular.

“Riding the Can-Am Spyder,” warned both the pre-ride instructional video and the Can-Am rep, “is NOT like riding a motorcycle.” Well, it is and it isn’t. It isn’t, in the fact that it steers very much like the snowmobiles and quads I used to ride as a teenager. It is, in the fact that just like on a bike, there are quite a few more ways you can be injured or killed riding a Spyder than there are if you’re in a car. Still, operating the Spyder really isn’t like riding a bike. I use the term “operating” because that’s what it felt like. Even with my admittedly limited motorcycle riding experience, I immediately felt what I can only describe as a lack of oneness with the Spyder. A motorcycle moves with you, and you with it; you lean into turns, your hands and feet are both in play when you brake, and you feel the engine right underneath you. The bike is a part of you.

This three-wheeled thing is also not a motorcycle.

Not so with the Spyder. The sensation going through turns is that of being pulled, and holding on tight – sometimes, it seemed, for dear life. My test ride - on the new Spyder F3 model - took me down surface streets and onto the 15 freeway; there wasn’t much opportunity to fully explore the Spyder’s high-speed capabilities, as my ride took place right during San Diego’s rush hour. Even going into turns at 40 mph, I felt gravity’s grip – the G’s yank you away from the direction you’re steering, as they do when you’re driving a car. There’s no question that the Can-Am Spyder is a stable beast – the two front wheels and all that weight keep the trike (yes, trike - "three wheels", literally; etymologists will back me on this) on the road through corners. Keeping myself on the Spyder through corners took a bit of concentration. And just using my right foot to brake took some getting used to as well; I found the brake pedal to be a bit touchy, causing some jerky stops. I also have wide feet, and found myself fighting for foot space on the right peg.

But the adjustment period was relatively short – and when my test ride was over I found myself enamored with the Spyder. I get the appeal. It gives you the same wind-in-your-face experience as a motorcycle but with a vastly shorter learning curve – and a much lower risk factor. There were five other riders in my test ride group, and based on what I overheard they represented a mixed bag of experience; two veteran riders, two with a year or so of experience, and one who’d never thrown a leg over a bike. (They were also all…old. I’ll get to why that matters in a second.) Whatever preconceived notions they might have had about the Spyder, they all clearly enjoyed their time on the trike. A couple of the riders grabbed literature and business cards on the way out.

Not a lot of people showed up to test ride the Spyder.

But the low number of test riders was a bit of a surprise to me, and I'd guess a disappointment to the Can-Am team. This speaks to a larger problem that Bombardier Recreational Products faces - while sales have presumably been good enough to keep Spyders rolling off assembly lines for going on eight years now, there still doesn't seem to be a whole lot of widespread interest in the Spyder, among riders and non-riders alike. It's still a niche machine, a curiosity. But why?

READ MORE:  Is A Trike a Motorcycle?

Part of the problem - maybe the biggest - is BRP's pricing. Dollar-wise, there's no "entry-level" Spyder. The Can-Am website allows you to "build" your Spyder and gives you the price as well as the projected payments. The cheapest model, a base RS, starts at $14,999. Assuming you finance it through BRP (at a 6% APR), you're looking at a monthly payment of $289.97. That's a car payment - which would be fine if you plan on using your Spyder as your only vehicle. And while many motorcyclists do just that with their bikes, many more don't - or can't, thanks to weather changes. (In the plus column for the Spyder: It's definitely a three-season machine, and I think it'd be a hoot to mount some snow tires on it and see how well it would fare in a blizzard.) From there, the prices jump considerably: the Spyder ST (Sport Touring) model starts at $19,199, the F3 starts at $19,499, and the base RT Touring model starts at $23,199.

"Ah!," you say. "My bike is my toy! Why shouldn't a Spyder fill the same role?" It certainly could, but that goes right back to the question at hand. Not many people can afford a $15,000 weekend fun machine - least of all a trike that fills up a one-car garage. If you live somewhere that actually has winter, you need to store it, and that could pose a problem for folks who don't have the garage space.

Then there's the problem of customer support. A search for BRP-certified local dealers in Carlsbad CA (my hometown) on the Can-Am website yielded 12 results. Good, right? Not so fast. Of those, only two were within 11 miles. The next closest was 26 miles south of me. The others were no closer than 45 miles away. A look at the search results for Los Angeles didn't inspire any more confidence. According to the Can-Am Spyder website, LA County has only three certified dealerships (Redondo Beach, Whittier and Glendora). This isn't merely a hassle for riders who might want to customize their Spyders. It's safe to assume that being a unique vehicle, the Spyder requires a unique skillset to do repair work on it. A lack of mechanics who are qualified to work on the Can-Am Spyder would certainly be a reason to invest one's money in a traditional motorcycle...or even a Harley factory-built trike.

And sadly, that's where the rider age factor comes in. There's a sense among riders that trikes are for people who simply can't ride a motorcycle. There's probably a fair amount of truth in that, as the physical demands a motorcycle places on a rider may be too much for riders who reach a certain age. I was the youngest guy in my test ride group - and I'm 45. Granted, I'm good shape for my age; I still play rugby and surf on a regular basis, and I'd like to think that I've got a couple more decades of riding on two wheels left in me. And yes, I'm keenly aware that this was the result of my ego at work, but I felt older than my years when thinking about the reasons I might buy a Spyder over a bike. Rider age also pulls the Spyder's price range back into the equation: It's a fair assumption that someone in their 50's and 60's could probably afford a $20,000+ vehicle, whereas someone just starting out in their career most likely hasn't reached that income level.

All that aside, though, I'd buy a Can-Am Spyder. It seems like it'd be a blast to take on long weekend trips (or even extended road expeditions) with my girlfriend, it'd be nice to have when southern California traffic gets especially gnarly, it gets better gas mileage than a car and above all else, it is a lot of fun to ride. And it's a purchase one can feel good about, holistically speaking. I've said this before: All motorcyclists benefit from alternate vehicles like the Spyder - reducing the number of cars on the road is better for riders, better for cagers, better for the environment. Maybe one day BRP will release a model than I can actually afford.