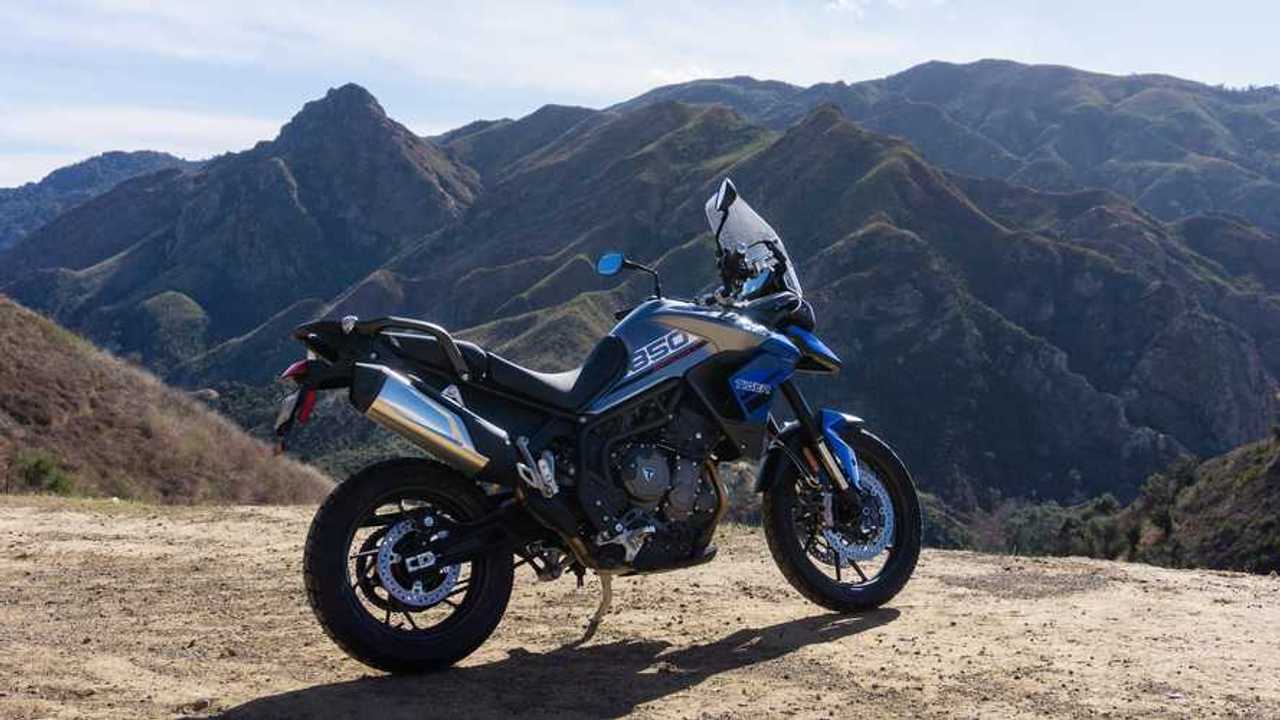 The road to adventure is paved with add-on options.

Despite what many OEMs would have you believe, adventure bikes are just bigger, more comfortable dual-sport motorcycles. Unlike classic dual-sport models, however, most ADVs favor long stretches of tarmac and a select few play well in the dirt. Triumph knew as much when it unveiled the new Tiger 900 lineup in 2020, differentiating trims with crystal-clear GT (on-road) and Rally (off-road) nomenclature. That approach left the base 900 without a classifying label, a specialized purpose, or handguards (is it still an ADV if it doesn’t have handguards?). Ironically, Triumph pulled the 900 moniker just one year later, opting to introduce the Tiger 850 Sport instead (still no handguards).

Despite its 850 rebrand, Triumph grandfathers in much of the Tiger 900’s infrastructure. The framework remains a tubular steel chassis. The 888cc inline-triple still provides the go; Brembo Stylemas still provide the slow. To achieve the $500 markdown, though, Hinckley restricted the Sport variant to 85 horsepower and softened the engine tune. For that reason, one thing is clear after spending the last few weeks with the newest member of the Tiger family. This overgrown dual-sport's duality doesn’t lie in the on-road to off-road ratio, it lies in Triumph’s top-spec features and base model sacrifices.

Don’t worry Triumph fans, the 12-valve, DOHC 888cc, inline-triple is back to steal the spotlight once again. Yes, the T-Plane crank still growls down low and roars up high. Yes, the 1-3-2 firing order (starboard to port) still generates a gentle purr at idle. Bore, stroke, and compression remain the same but a model-specific tune results in 85 horsepower at 8,500 rpm and 60 lb-ft of torque at 6,500 rpm.

That doesn’t make this Tiger docile though. From takeoff, the triple’s lowdown pull unloads the front end with regularity. Hovering the front wheel away from a light isn't a rare occurrence and neither is the grin that accompanies it. At 70 mph, the rig cruises at a buttery-smooth 4,400 rpm in sixth gear, but that’s where the smooth sailing ends. Just over 5,000 rpm, vibrations creep through the bars and 5.2-gallon gas tank. They eventually build toward the 10,000-rpm rev-limit, sending tremors through your knees and palms. The shaking isn’t as prominent through the foot controls, but by 8,500 rpm, it’s pretty jarring.

For those used to Triumph’s ultra-refined powerplants, the 888cc mill might feel a tad agricultural. Otherwise, the tractor-like pull might be its redeeming quality. Compared to a model like the Street Triple, the 850 Sport comes off as more raw and rugged experience—and it certainly feels that way too.

Even with those demerits, I personally had a blast with the T-Plane triple. The torquey powerband was perfect for light-to-light blitzes and the 85 ponies were more than enough for the twisties. If you want the Gold Wing of adventure bikes, look elsewhere—the base Tiger is too budget for you. However, if you’re pining for a mid-size ADV that you can throw around the bends and pop a few (accidental) wheelies, the 850 Sport is a great start.

Triumph is known for sweet-handling machines, and the Tiger easily upholds the marque’s reputation. No, it doesn’t have the Street Triple's agility, but compared to other adventure bikes, the 850 Sport stands apart. Steering is direct but stable and tip in is immediate yet fluid. Though slightly under-sprung, the front end delivers just enough feedback to foster confidence and the pre-load adjustable monoshock doesn’t sink or bob mid-corner. Unfortunately, I also found out that the nimble Tiger has an Achilles heel in its weakly-sprung front end.

Under hard braking, the un-adjustable fork dives sharply, unsettling the chassis right before turn in. Most riders would happily take the steel-braided brake lines and top-shelf Brembo Stylema calipers that come stock on the Tiger family, but the set-up frequently overpowers the 850’s soft front end. The radial master cylinder might contribute to the overwhelming braking power, but it also provides unparalleled feel through the lever, allowing user to control the rate of rebound after hard braking.

A 19-inch rear wheel and 17-inch front improve the Tiger’s road manners and Michelin Anakee Adventure tires pack more than enough grip in dry and wet conditions. Rolling on 80/20 road-biased hoops, the 850 Sport is under no illusions of off-road adventures. The bike’s modest dirt aspirations are better suited to fire roads and gravelly highway pullouts, and the Anakee Adventure tires worked as advertised on mild trails.

To further cement the Tiger’s commitment to pavement, the front end only bolsters 7.1 inches of travel and rear travel stays at 6.7 inches. The lack of switchable ABS and a dedicated off-road riding mode also restricts the Tiger's prowess in the dirt. The former made downhill descents a bit nerve-wracking and the latter keeps intrepid explorers on their best behavior. Yes, the 850 Sport can handle quick off-road sections but I wouldn’t push too far into the unknown.

You’d better make an adventure bike comfortable if it's made for long stints on the motorway, and House of Hinckley delivered—for the most part. At 31.9 inches, the seat height sounds considerable, but the narrow seat-to-tank section supplies more clearance than the spec sheet suggests. With a 32-inch inseam, I could easily flat-foot the bike at standstill, even with the adjustable seat raised to its 32.7-inch max height.

Ample suspension sag and a plush seat only added to the cockpit’s comfort and the adjustable windscreen created a pocket of calm for the rider. Errant gusts frequently brush the outer shoulders, but the wind protection granted by the windshield and lower deflectors greatly reduced rider fatigue over the long haul. Ergonomics also feel natural and relaxed due to the swept-back handlebars but creature comforts are low on the entry-level trim. No cruise control or heated grips. No luggage or handguards (nope, I can’t get over the handguards). Along with the barebones accommodations, the Michelin Anakee tires produce a loud drone with the slightest lean angle. Even with earplugs in, the humming front tire was audible over the engine and exhaust.

Despite the no-frills approach, Triumph keeps the Tiger 900’s top-of-the-line software intact on the 850 sport. The full-color TFT display shrinks from 7 inches to 5 inches, but the functionality and ease of use make the dimensions downgrade easy to overlook. Menus are simple to navigate with a joystick at the left-hand switchgear and riders can personalize the layout to suit their preferences. That’s where the options become overkill though.

While beautiful, Triumph’s tachometer graphics aren’t easily discernable and take up too much screen real estate. I defaulted to displaying the numerical tach counter alongside the fancy graphics to confirm the actual engine speed. That resulted in the tachometer monopolizing the TFT dash and required cycling though range and mpg pages separately. Also, the level of customization can quickly become distracting. On several occasions, I found myself picking different layouts or font colors when my eyes should have been on the road. If Triumph doesn’t reduce the number of menus and options on future models, they should seriously think about limiting TFT use while the bike is in motion.

It's no secret that the Tiger 850 has BMW’s F 750 GS in its crosshairs, but adjacent competitors like Yamaha’s Tracer 900 and the Ducati Multistrada 950 should be on notice as well. Even upgrading Versys 650 owners and downsizing V-Strom 1000 fans might steal a glance at the 850 Sport. Triumph hopes its generalist approach will lead aspiring adventurers to the entry-level Tiger and they’ve primed the model for ADV converts.

Unlike the Tiger 900 range’s Earth tone colorways, Triumph livened up the base 850’s liveries. The baby Tiger lies directly in the path of a younger crowd (younger for adventure bikes). Nowhere is that more evident than the new paint scheme. The Graphite and Diablo Red or Graphite and Caspian Blue colorways preserve the Tiger’s practicality but adds a touch of youthful flare. It’s sophisticated yet rugged. A little Posh Spice, a little Sporty Spice.

Whether that tactic works will depend on whether Triumph can get behinds in seats. If they can, they’ll have a winner for years to come. Now, will this variant appeal to mile-munching tourers or hardcore off-road riders? No way. Is there anything particularly sporty about the Tiger 850 Sport aside from the new moniker and paint job? Not really. Is it still a good introduction to adventure riding and the Tiger range? Most certainly.

With that said, my time with El Tigre Ocho-Cincuenta was thoroughly enjoyable. If I had my pick of the litter, I’d go with the bargain trim without hesitation. As a road-biased rider that prefers less tech, the 850 Sport suits me best. Of course, Triumph offers over 60 accessories for the little Tiger so owners can upgrade where they see fit. If you’re thinking about getting into adventure riding and don’t mind a back-to-basics attitude, the newest Tiger is one of your best options on the market. Just make sure you have handguards on your shopping list as well. If you haven’t heard, the Tiger 850 Sport doesn’t come with any.