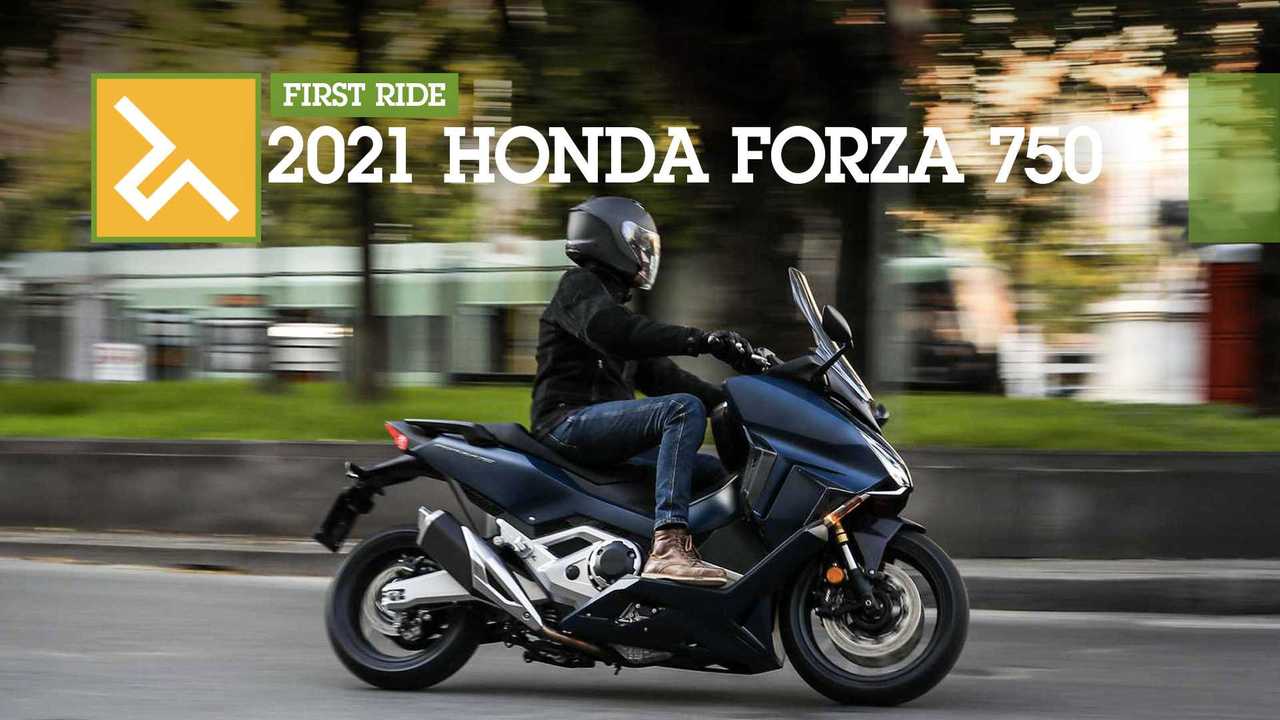 The best of both worlds?

On October 14, 2020, Honda introduced the 2021 Forza 750 as the new flagship in its scooter lineup. The new model combines features borrowed from some of the lineup’s most popular products in an attempt to create the ultimate maxi-scooter crossover.

The powertrain is the same at the Honda 750 DCT family members, namely the X-ADV and NC750X, for added versatility while the design is a cross between the other Forzas and the Integra. The result is a fresh-faced, touring-capable motorcycle and scooter hybrid that replaces the Integra at the top of the food chain.

While the Forza 750 isn’t available in the U.S., our Italian colleague Luca at OmniMoto got to take the new maxi-scooter out for a spin in and around Rome. Here’s what he has to say about it.

Tokyo’s GT Premium scooter follows in the trail of the X-ADV and the Integra and combines the best of both models. There’s a new contender in the maxi-scooter segment for 2021: the Honda Forza 750. It is destined to succeed thanks to Honda’s state-of-the-art technology, a tested and proven engine, and a design that stands out.

Honda already has experience with half-motorcycle/half-scooter hybrid motorcycle designs. Not only do they strike a balance between the two philosophies but they also open new doors to the market for the maker.

Though the outgoing Integra 750 didn't really manage to gain much momentum on the market, the Honda X-ADV did. That bike proved that the design philosophy can be successful by ranking as a top seller in Europe. Now, the new Forza 750 is seeking to attract those who are interested in the hybrid concept but want a more touring-friendly vehicle.

The new Forza 750 certainly looks the part with its sharp yet harmonious lines and edges. It has LED lighting at both ends, with LED turning signals integrated into the fairing that encases the new dashboard. At the center, a new 5-inch TFT display allows the rider to navigate through the four riding modes and Honda Selectable Torque Control (HSTC) settings using the controls located on the handlebar. The throttle-by-wire allows the rider to personalize the output, engine braking, and traction control via the four riding modes—Rain, Standard, Sport, and User. Each mode also features an optimized DCT gear ratio.

The all-new Honda Smartphone Voice Control System, introduced on the Forza, can be paired with a smartphone and makes calls, messages, and navigation management a breeze.

The powertrain isn’t the only component that proves that the Forza 750 is more than a simple scooter—Honda’s scooter flagship is underlined by a proper motorcycle chassis. Features include a (non-adjustable) 41mm Showa Big Piston inverted fork with 4.7 inches of travel at the front and an adjustable monoshock paired with a Pro-Link swingarm that also offers 4.7 inches of travel.

Where the Forza is undeniably a “scooter” is in its comfort and ergonomics. The two-level saddle is 31 inches tall, but its narrow shape at the front allows the rider to more easily flat-foot the vehicle. This creates an upright riding position shifted toward the front of the vehicle. Protection is provided by the large fairing and tall windscreen that sadly can’t be adjusted.

The 745cc, eight-valve, parallel-twin is the secret weapon that could potentially allow the Forza 750 to become a serious competitor in its segment. It's the same engine we’ve already met in the X-ADV, the Integra, and the NC lineup. The cylinders’ long stroke is designed to offer optimal performance in the mid to high-range, which suits its commuter personality best. Power is rated at 58.6 horsepower at 6,750 rpm and at 50.9 lb-ft of torque at 4,750 rpm.

Of course, the engine was updated to meet the Euro 5 emissions standards, which paves the way to an X-ADV and, eventually, an NC update for 2021.

Despite an advertised weight of 518 pounds wet, the Forza 750 is surprisingly light, thanks among other things to good weight distribution and an optimized geometry that makes controlling the vehicle easy. At 6’1", I don’t have any problems putting both my feet on the ground, but the scooter is designed to offer shorter riders the same convenience.

The non-adjustable windscreen could have been this maxi-scooter's Achilles’ heel but because the fairing does such a good job at protecting the rider even at highway speed, it works out. The only real flaw is the space for the feet. The floorboard is spacious enough at the front to nestle the feet; not so much toward the center of the scooter.

Part of our test ride led us to Lake Bracciano where we got to test the Forza 750’s maneuverability. It easily navigates the Roman arteries and filters to the front of the line at stoplights to be the first off and leave all the traffic behind. The maneuver becomes almost second nature once you understand how wide the vehicle is with the mirrors.

Around the Lake, we finally get to put the Big Forza’s assets to the test and the chassis doesn’t disappoint. The choice of a 17-inch front wheel wrapped in a 160 tire, combined with a braking system that’s present but not aggressive, allows the rider to handle the scooter like they would a motorcycle.

The switch between riding modes is quick and practical, and it doesn’t take long to understand the characteristics of each mapping. While the Standard mode works well in the city and on the streets, in Sport mode, you get to enjoy the engine's full potential. The Rain mode is surprisingly versatile as it doesn’t cut the power and takes full advantage of the engine’s torque at low rpm.
Even without being particularly mindful of the fuel economy, after almost 95 miles on the Forza, I averaged 58.8 mpg (for a 3.5-gallon tank), a result deserving of praise.

To keep the handling more motorcycle-like in the curves, all I had to do is change gear manually which is faster than letting the DCT do its thing. It only ever gets in the lower gear range when you slow down significantly or hit the brakes. The different engine maps optimize the DCT’s behavior and adapt it to the situation. Gear changes are otherwise smooth. The transmission is perhaps the Forza 750’s most “scooter-like” characteristic. This is yet another reminder that the vehicle is meant to offer the best of both worlds—a subtle balance the 2021 Honda Forza 750 achieves effortlessly.