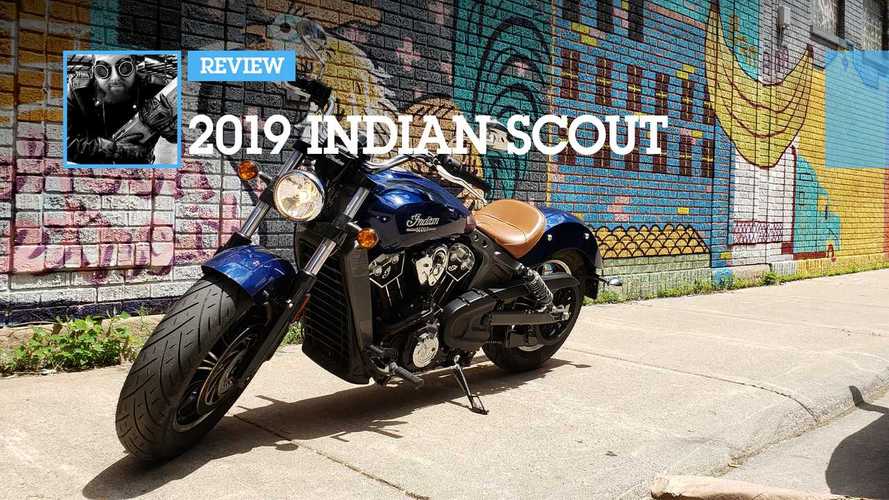 When perfect is the enemy of good.

Our long-term Indian Scout, the CubScout, has gone back to its home. After a long summer together in which we rode around Southeast Michigan back roads, ran errands, and clocked a ton of freeway miles, Ol' Blue headed back to Indian's press fleet and left a cruiser-shaped hole in my garage. To be honest, I'm not sad to see it go. Despite spending a lot of time together, the Scout and I never clicked. We were just garage mates, politely making time until our work was done and we could go our separate ways. Kinda bleak, eh? So why didn't I click with Indian's popular mid-sized cruiser? Read on.

To start off, let me say this—the 2019 Indian Scout is an almost perfect middleweight cruiser. It's good looking, well-appointed for its price point, and has all the things cruiser lovers want (acres of chrome, forward controls, tiny solo saddle, etc.). It looks phenomenal in blue, especially with the brown saddle mine had. The 1,200cc v-twin was flawless, ran like a clock, did everything I asked of it, and never let me down. It went, stopped, and looked exactly how you expect a bike like that should. That's its problem.

See, the Scout is the platonic ideal of a mid-sized cruiser. It has all the cruiser amenities—and all the (arguable) pedigree thanks to the Indian name slapped on the tank—that anyone could ask for. It's the cruiserest cruiser that ever cruised. You know what it doesn't have, though? You know what it's severely lacking? Personality. The Scout is incredibly dull. Almost insultingly so for what it is and how much it costs. It's aggressively average in every way, from its fat front tire to its tombstone-like tail light. It's a cruiser like any other with little, in my opinion, to make it stand out from its peers.

I started out really liking the Scout. Riding it back to HQ from the west side dealership where I picked it up I was impressed with the bike's fit, finish, and panache. When I took it down to Eastern Market for the first ride article I found it well-mannered and extremely biddable in the tight, obstacle-laden alleys and crowded streets. I thought I was in love. As the weeks wore on, however, the shine wore off our new relationship real quick.

The Scout when our relationship was fresh and new.

First, it was little quality of life things—the seat's uncomfortable, the rear suspension has precious little travel, it has a lean angle measured in tenths-of-degrees, etc. Those are forgivable. Hell, I forgave a lot more than that with last year's long-term Harley loaner. That's not what turned me off. It was the, I don't know, the bike's commonness, its utter anonymity in a sea of copycat cruisers. The bike didn't speak to me, didn't grab me, didn't excite me. There's nothing new or fresh about the design. A water-cooled V-twin and the Indian "I" don't make up for a general blandness in the styling department and a distinct lack of passion.

I started shuffling it around the garage instead of riding it, and either wrenching or riding my old Japanese bikes in earnest in an effort to avoid the Scout's sad and lonely gaze. A pile of British and Japanese bike parts slowly collected in the saddle—intake boots and brake shoes precariously balanced on head gaskets and shrink-wrapped chains. Toward the end, I had to force myself to take it out on the road, out of a sense of duty to you guys as much as anything. That's a terrible position to be in, vis a vis, a motorcycle. Motorcycles are supposed to excite you, not bore you to the point where you mainly use them as an expensive parts shelf.

Before the parts started to pile up.
Cruising around Detroit in happier times.

My time with the Scout also made me wonder something. Who is this bike for, anyway? What does it offer that, say, Harley or any of the Big Four Japanese companies don't offer in a middle-weight cruiser? Is it for people who want American bikes? If so, why wouldn't that person buy a Sportster over a Scout? It's certainly not cheaper than a Sportster, and it certainly doesn't have as full a parts and accessories catalog backing it up. Is it because of the Indian Motorcycles heritage? The last real Indian was made in the early 50s, and everything else—including these admittedly excellent Polaris Indians—have just been reboots. Hell, Hinckley Triumphs have more claim to the Triumph pedigree than the Polaris Indians and even that's pretty tenuous.

The most exciting thing about this photo is the background.

Ultimately, I think our man Jacob put it best: The Indian Scout is for people who want an Indian Scout. Who are they though, and why do they want one? I thought I was the kind of person who wanted an Indian Scout, but alas... The 2019 Indian Scout is practically perfect in every way, but that doesn't make it very good. Not by a long chalk.