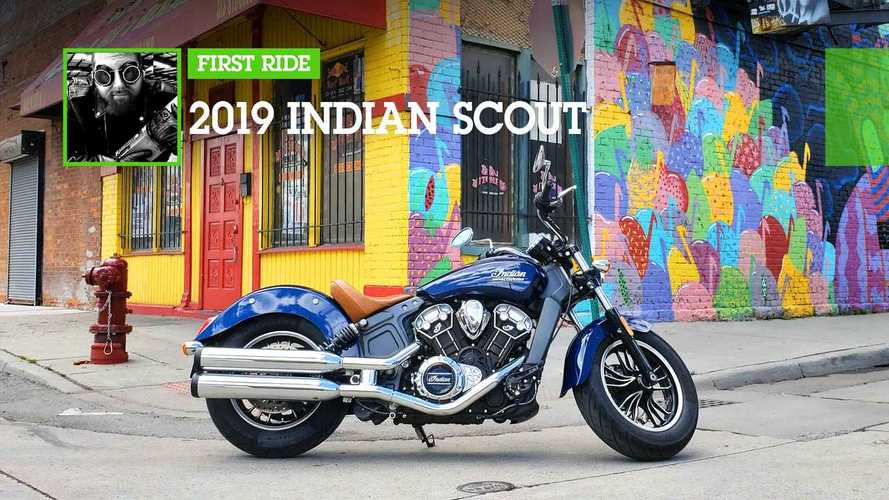 It's finally summer, and you know what that means. Fleet bikes! Last year you may recall that we had that flat-white Harley-Davidson Fat Bob 114 all summer. You may also remember that I was pleasantly surprised by that bike and was kind of sad to see it go. So what do we have lined up for this year? Well, apparently the folks over at Indian saw me out there having a blast on good old FleetBob and were like, "Hey, we make cool bikes too!" So to prove it, they hooked us up this summer with a brand spanking new Scout. Friends, meet the CubScout ('cause it's a Scout and it's blue, get it?).

As you may know, the Scout is Indian's basic, mid-sized bike and shares that segment with the hot-rod Scout Bobber and the entry level Scout Sixty. It's also the inheritor of one of Indian's oldest and most storied model names, which is pretty cool. It's powered by an 1,133cc, water-cooled, fuel-injected, sixty-degree V-twin with a stated output of around 100 horsepower (81 at the wheel) and 72 pound-feet of torque. Those ponies get to the rear wheel through a six-speed transmission and belt final drive. Suspension is pretty standard with a dual-shock setup aft and 42mm forks forward, and the ABS brakes are discs all around with a two-piston caliper on the front wheel and a single pot behind.

The Scout has a pretty impressive suite of features, especially for a bike at its price point. Along with the ABS it comes with a easy to read analog speedometer with a built-in multi-function display. The MFD always displays a gear indicator and clock, and can toggle through the usual trip odometers, a digital tach, engine temp, volts, etc. You can even pull error codes out of the bikes computer and display them on the MFD which is pret-ty handy.

Totally not where that goes.

One kind of (okay, extremely) annoying thing—and my first frustration with the bike—is the placement of the MFD controls. Instead of a button on the unit itself or, like the Fat Bob had, a clearly marked button on the handlebar controls, the Scout's control is a little trigger button on the back of the left hand switch box. That's not where it goes, Indian! Who would ever look there on the back of the switch box between it and the clutch lever. Not me, that's for sure. I had to look it up in the owner's manual before I could even set the clock.

The Scout that we have for the summer is a 2019 model in a color Indian calls "deep water metallic", a pretty poetic way of saying "navy blue". I picked it up last night way out in the wildlands of Detroit's far-western suburbs at a local Indian dealer. I rode it home the thirty or so miles through alternating wind and rain along various mid-speed metro area trunk roads. It was smaller than I expected it to be, and the engine was way peppier. It pulled hard in the first four gears and the bike was surprisingly nimble considering that fat front tire. I needed all the nimbleness the bike could give to dodge huge pools of standing water and our massive Michigan potholes and frost heaves.

Today I spent some time familiarizing myself with the bike in my driveway before heading down into the city to find out what it's low-speed urban manners were like. After figuring out how to control the multi-function display (see above) I set off for Eastern Market, a warren of narrow streets, butcher shops, produce distribution centers, killer restaurants, bakeries, loft apartments, bars, and venues right near downtown. Eastern Market is the primary supplier of meat, produce, and other sundries to the Metro Area's restaurants and hosts an amazing farmer's market all summer. It's also one of my favorite places in town.

I rode the Scout around for a while, weaving between delivery trucks, forklifts, and dudes hauling pallet jacks stacked with crates of tomatoes and lettuce. It did really well in the Market's tight confines and was easy to get in and out of small spaces and up on to sidewalks for photo ops. Over all, I was pretty impressed with it. The Scout is the first Indian I've ridden and it made a really good impression on me. While first impressions are important, we'll see how the bike stands up for the rest of the summer. What about you all, what would you like to see happen with CubScout this summer? Let us know below.