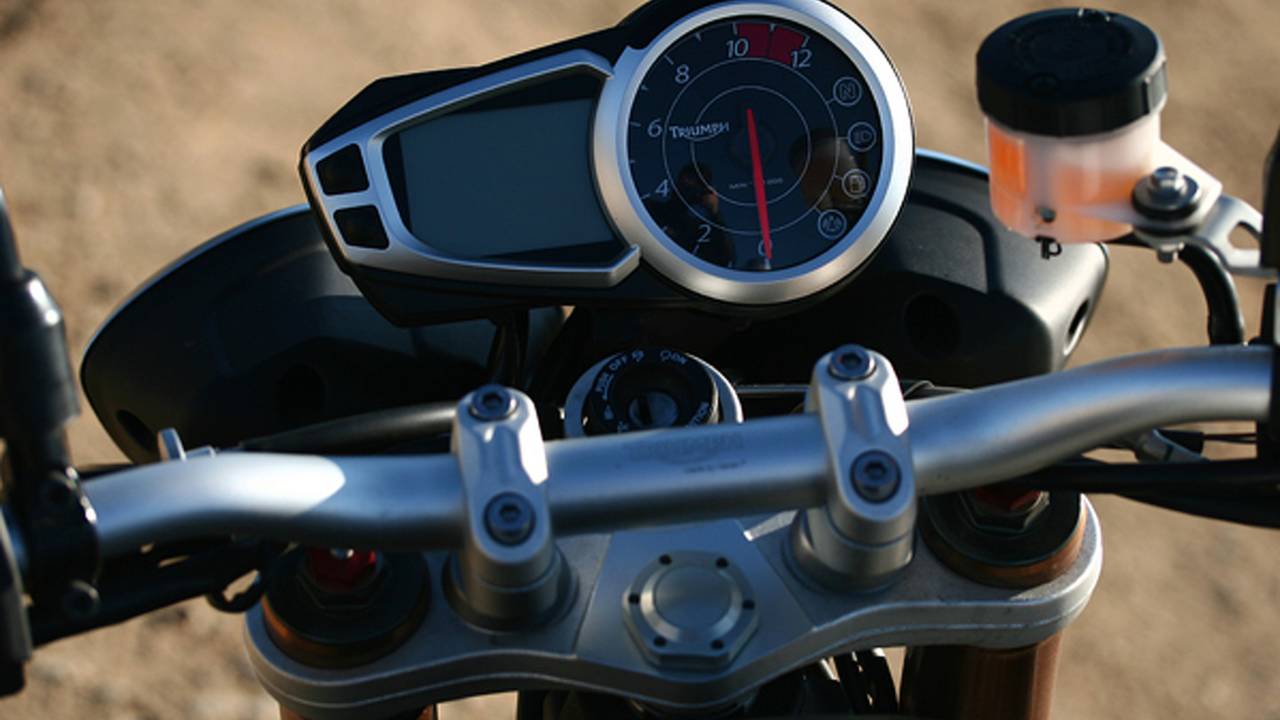 Just about everyone has a list of bikes that they absolutely must own someday. Mine is always changing, but this week it includes an FZR400, some form of 916-like superbike, a 1985 GSX-R 750, 660cc KTM 560 SMR and this new Triumph Speed Triple. Really there's only two constants there: The GSX-R and the Triple. Even before I started riding, I wanted one. Something about the look, the hooligan reputation, the wheelies and the serious, almost business-like twin-light streetfighter look is irresistible. When photos showed up of the 2011 bike's wolf-eye lights, I was one of the people wishing it was a hoax. Then I rode the bike and realized that the lights don't actually matter. This is the 2011 Triumph Speed Triple.

Three Is The Magic Number:

Sitting on the bike, you don't see much of those lights. Front and center is the large analog tach. The bright LED shift light is useless in first gear (it's best to cover the rear brake) but functions beautifully from second through fifth. To the left of the tach is an LCD display showing speed in the center, engine temp to the left, and remaining fuel to the right. The S3's computer can display miles before empty, a neat feature that more manufacturers would do well to adopt. Triumph doesn't sell the bike with a fly screen, but they should. With the screen in place, the new lights go from awkward to perfectly acceptable and with a 155mph (indicated) top speed, any wind protection would be greatly appreciated.

The Speed Triple's charmingly odd looking frame is modeled after Spondon racing frames of the ‘90s. For the first three years of Speed Triple production, the bike had a flex-prone backbone style frame. Back in the day (1994-1996), Spondon was the way to go if you wanted a high-quality, stiff racing frame. Their signature large-gauge aluminum twin-tube look was used on the 1997 bike and though the 2011 frame is made using modern casting methods, it retains this signature styling cue.

The "all-new" frame is a new casting, but houses the same motor (with 5 more hp) in a very similar place as the outgoing model. The swingarm is new as well, and is slightly longer. Fully adjustable forks are new for 2011 as well. The final relevant change is new wheels that drop 5lbs of unsprung weight. These relatively small evolutionary improvements, but they add up to a fast and competent overall package.

Around town, stoplights and stop signs are just another chance to roll a stoppie, then loft the front wheel. If you fear for your license, this is not the bike for you. Buy a Street Triple instead. That said, it's surprisingly civilized when it needs to be. Quiet under-seat pipes and down-low torque let you put around nice and quiet-like. Gas mileage is over 40mpg when ridden like this, even two-up. If you like powerful wheelie-prone naked bikes, the S3 is great for everyday transportation and commuting duty.

It does have its faults though. A wet weight of 471lbs isn't all that sporting, but then again, neither are the upright bars. Rough pavement and large throttle openings often induce the most fun headshake you've ever experienced. Just stay pinned or open the throttle a little more for a fun leaned-over wheelie. That headshake does turn scary over 100mph though. A steering damper will fix it and should be installed at the same time as your light-weight low mount pipe and flyscreen. Our test-bike has an extra neutral between fifth and sixth that's supremely annoying and likely damaging to transmission internals. Dealers will take care of issues like this under warranty, but transmission quality shouldn't be a problem on an $11,799 bike in 2011. This was a known problem on the old bike that’s reportedly been fixed, but it hasn’t been on our test bike. The same problem — false, clunking, grinding neutrals — also occurs if you try and short shift very early. You can ride around it by making sure you run the engine out a bit in each gear, but you shouldn’t have to

The Speed Triple isn't exactly the only option for a naked literbike, but it is unique. The motor isn't the most powerful thing around, but you'll never find yourself wanting more. If you find yourself comparing it to the Z1000, CB1000R, Streetfighter or Tuono V4R, have a look at the chassis geometry. A look at those numbers reveals the true intentions of the S3. 22.8º rake, 3.6" of trail, 56.5" wheelbase and 32.5" seat height are all very sportsbike like. Those other naked liter bikes don’t tend to be quite so steep or short, instead playing it safe or, looking at it another way, playing it slower and less fun. That’s why the S3 steers so fast and wheelies so easily.

Unlike those other nakeds, this isn’t a de-tuned sportsbike either. Triumph has no 1050cc or similar sportsbike in its range, so the S3 was engineered from the ground up to be what it is in this form. That’s evident in the chassis geometry, but also in the cohesiveness of the whole package. On the Streetfighter, for instance, you end up unable to really exploit the full performance of the 155bhp motor due to chassis limitations. No such problem on the S3, it doesn’t need to play second fiddle to any other bike in the Triumph range.

It's just as fast as a proper superbike on canyon roads, but more comfortable and slightly less work to ride. It's the perfect bike for an expert rider who knows the difference between Dunlop 209s and 211s and also needs to get to work during the week. Unlike most other performance bikes, it combines all that speed, all that handling and all those wheelies into a package that’ll compete with any classic bike or cafe racer on style, especially in plain white and even with those angular new lights.