The surprising thing about the Honda CBR250R

The first surprise came not on the little CBR, but on a Daytona 675R. Chasing Sean from my place in Hollywood to his in Inglewood, it was Sean on the Honda that kept leaving me behind in traffic. The 675 makes 124bhp, the 250 18. The second surprise came in the Santa Monica Mountains. In tighter corners it was again Sean (this time with Ashlee on the back) that would pull ahead in the tighter corners. Maybe it was time I kept making him ride the smaller bike. The third surprise was riding the Honda CBR250R. It’s amazing.

And I really was making Sean ride the CBR250 while I played with fancier machinery. Somehow, choosing between a Triumph Daytona 675R, an Aprilia RSV4 Factory APRC SE and the CBR, the decision seems obvious: make Sean take the little bike. But, that decision left me with numb hands on the freeway and on bikes with virtually zero steering lock in gridlocked traffic. It left me worrying about power and cops and slides and getting thrown out of the seat over bumps. It had me worried about where I parked, even during the day.

Eventually, for the purposes of testing, and because I needed to pick up the girlfriend at her mechanic’s and the RSV4 isn’t wearing pillion pegs or seat, I grabbed the keys to the CBR250R for the weekend.

First impressions weren’t great. Afraid to snap the cheapo pressed-steel gear lever, it took me approximately 19 tries to find 1st. Then, riding home, I kept annoying a guy on an R1100S by leaving him for dead at every light...for the first 10 yards, only to make him pass me right back.

The next morning wasn’t much better. Parking outside the Bourgeois Pig, I felt a bit like a dunce for not showing up in usual style. At least they couldn’t hear the pitter patter of the overly-muffled engine inside.

But, each new time I hopped on the CBR250R, the more I learned to love it. Partially because it was just so easy to hop on. Know how, when you’ve got a big, fast motorcycle to ride, you question the merits of using it for the journey? Is a short trip going to be bad for the engine? Will the battery have enough time to charge between here and there, so it starts on the other end? Am I too hungover to manage 180bhp right now? Am I really ready to accept responsibility into my life just to run to the store for some Sour Patch Kids? The CBR250 doesn’t ask you those questions. It’s just all cuddly, light, extremely easy to ride and there waiting for you to hop on and use it like a tool whenever you need to get somewhere. The nearest equivalent I can think of is a little scooter like a Vespa or a Ruckus; there’s a psychological barrier that’s not breached by hopping on it. Just here, there’s gears to play with, 17-inch wheels that don’t get sucked into potholes and you straddle it rather than sit in it. Seriously, it worked out that it takes less effort and less stress to split lanes on the Honda than it does on my bicycle. Something about tire widths and braking ability I won’t bore you with here.

That cheerful, friendly usefulness extends to faster riding too. Lose the front tire in a pothole leaned way over mid-corner? No worries, you’ll catch it. Come into a blind corner way too fast? Again, don’t worry, you’ll make it around. That corner just needs to be really, really tight. Need to change line while absolutely committed? Just graze the front brake lever a little more or push on the outside bar to pick it up a bit. There’s really not much you can do wrong while riding the CBR, which isn’t something you can say about riding a really fast, really focused performance bike.

In fact, the only time the CBR suffered the consequences of motorcycledom while in my care was when I clipped with wing mirror of an irate Saab driver. The CBR may be little in capacity, but it’s not any narrower than other bikes. And riding it, you may be thinking of it as a cute little puppy dog, but non-riders still see it as a motorcycle. That Saab driver saw enough of it to flip her shit, but not enough to roll down her window so a badass biker could apologize.

Redline in every gear. Screeching the tire on downshifts. Tucking in. Hanging off. Backing it in. Wildly exaggerated arm movements as you go off the throttle and fully back on between every gear. Riding the CBR250 is never not fun. And all the above can happen between here and the grocery store.

I suggested to Sean one day that we go ride 33, up north of Ojai. About an hour and half or two hours away. Make it a six hour day if we go through Frazier Mountain and come back down the 5. He wasn’t in to it, claiming that it was just too far to go on the little Honda. He’s crazy, that wouldn’t have been a problem at all. He’d have gotten pissed off having to ride the slower bike all day is all.

Low pegs, high bars, a supportive, well-padded seat and not much width between your knees. Hell, even a fairing that actually keeps the wind off. Both Ashlee and Brittney report happy vaginas after riding on the back, too.

Surprisingly, in town at least, the performance doesn’t really seem to suffer. The little single-cylinder is more limited by top-end rush (or total lack thereof) than it is by low-end grunt and the gearing is low enough that it still seems to pull pretty much the same. The overly soft suspension still handles just fine, the relatively weak brakes don’t get any weaker. There’s big grab handles. We don’t get yelled at for wheelying. 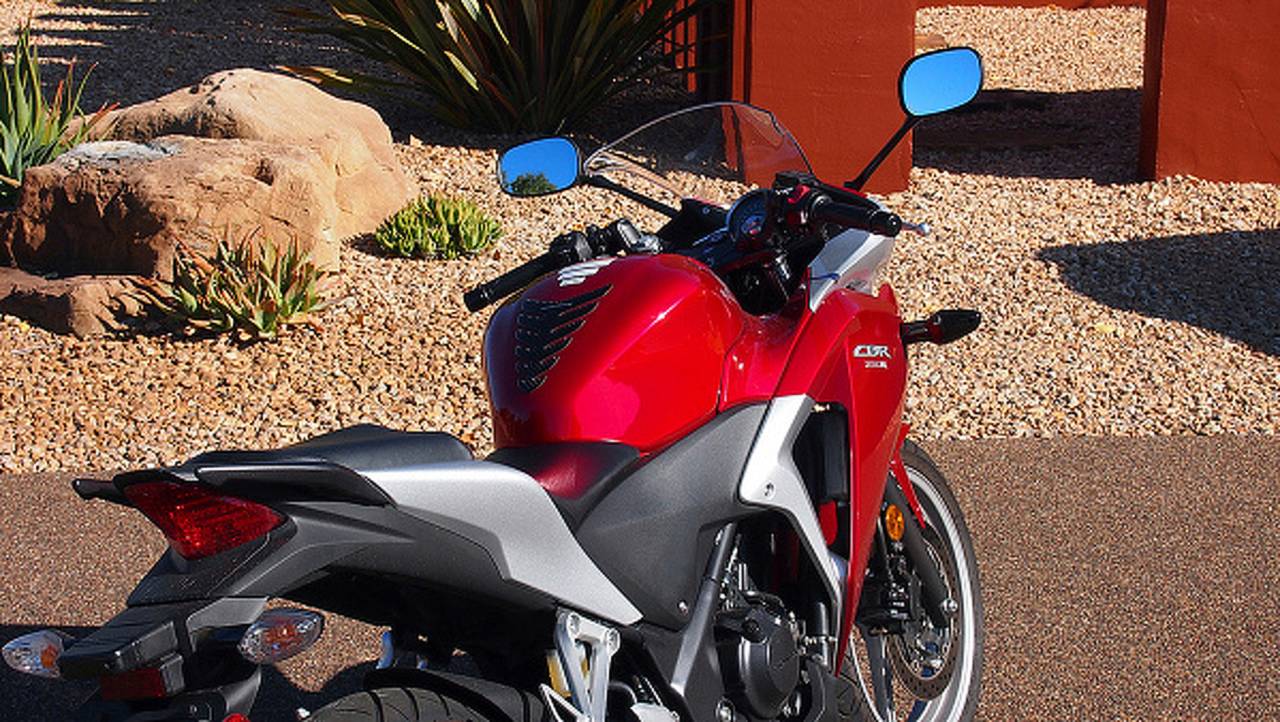 The second biggest disadvantage with having an employee that you don’t really pay enough (feeling bad about not really paying them enough being the first biggest disadvantage) is that they have a great excuse for never, not once, putting gas into a bike. I actually have a theory that Sean might have a side business selling HFL’s gas on the black market, he’s never, not once, brought a bike back that had more than enough gas to barely get to the first gas station.

Fearing the worst, I set out on the CBR for the first time fully expecting to stop at the first gas station. But, with two of the six bars on the gas gauge (yes, it has a gas gauge!) showing, I headed off home. When it went down to one, I stopped. It actually took significant effort to put enough gas into it to hit the $5 minimum credit card payment at the ghetto gas station. The CBR gets 77mpg according to Honda and the tank is a pretty reasonable 3.4 gallons. Guess one bar isn’t really empty.

Filling up was made an unnecessary pain though, there’s a cross bar occluding the hole just under the neck, meaning you can’t just shove the nozzle in and squeeze. Instead, you have to hover it over the tank, lift the vapor shield with your other hand and drizzle the gas in squirt by squirt. At least you won’t be filling up very often; tank range is a ridiculously high 260+ miles.

Spoiled by cheap credit and too-fast bikes, American riders tend to be under the misconception that a “little” 250 isn’t enough to keep up with traffic on the freeway. Are you kidding me? So long as you’re prepared to use full throttle, you can still be the fastest thing out there. 0-60 feels like it’s in the high 4, low 5 second range, meaning you’ll be faster than any car not wearing a Porsche badge.

Absolute top speed is a little over 90mph and it’ll take you a long time to get there. But you’ve still got pretty decent acceleration on up to about 85mph. I never felt unconfident, even in LA’s occasionally very, very fast moving traffic.

Out with other bikes, they’ll all leave you for dead away from traffic lights, of course, but the handling is good enough that a skilled rider will still show squids their taillight on mountain roads.

Free of the consequences of power and weight, but still on a responsive, fun bike, you can take the time to practice skills you’re too busy to on faster machines. My downshift throttle blips had gotten rusty, but after a weekend on the little Honda, they’re perfect again, something the Street Triple R appreciates.

Lower speeds meant I was also able to take a long look at things like trail braking, body position and all the other little things that make up good riding and make sure those were on point too.

As Sean points out in this article, the CBR250R is essentially a perfect tool for a newer rider to learn how to ride fast on. All the big bike inputs are there, they just happen at lower speeds with lesser potential for disaster should you cock something up. If you’re on a larger bike and struggling to get faster, trade down, spend a year trying to beat your friends on the CBR, and you’ll be much, much faster when you trade back up. 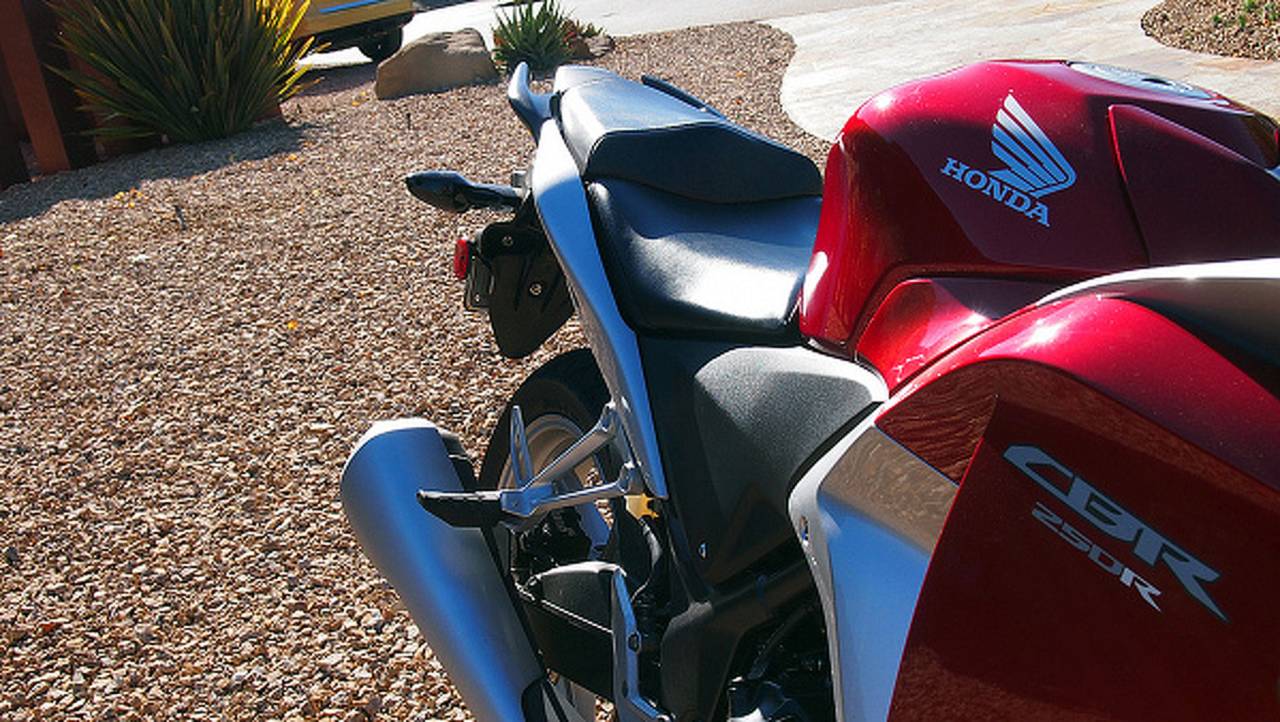 The Burden of a Name

Find anyone who knows the littlest bit about motorcycles and do a word association with them.

So, when they see the little CBR, its Shamu-alike styling and its pretty low power and torque figures, things don’t really add up. But, forget all that R nonsense for a second and imagine if I whispered “CB250” into your ear. Aside from being a little turned on, you’d gain an immediate understanding of what this bike is. It’s a fun, practical, affordable little bike that punches way above its weight. The CBR name is an unfortunate burden, creating unrealistic consumer expectations.

The Freedom of Simplicity

You know what? I miss the CBR250R. As I write this, I’m about to run to the Valley, pick up some vegan Thai (tastier than regular Thai, promise), then head over to Brittney’s place to watch movies. It’s been a long week and I’m exhausted. I’m not really looking forward to taking the RSV4 or the Street Triple R. I know, that’s not a bad problem to have, but it’s indicative of the CBR’s appeal. I’d much rather just relax and ride it tonight.

You already know this would be a great bike for a new rider. You already know it’s cheap and frugal and whatnot. What you don’t expect, unless you’ve ridden it, is that the eagerness and the size and the light weight combine to create a two-wheeled experience that’s pretty much unique in today’s big bike dominated market. It’s genuinely fun and not in the typical run-from-the-cops kinda way. I’m struggling to put words to exactly what it is that makes the this bike unreservedly amazing, but it’s something that motorcycling hasn’t really seen since those old “You meet the nicest people” ads. The Honda CBR250R is the friendly face of motorcycles and the surprising thing is that, sometimes, it's nice to be friendly.