Living With The 2014 Honda Grom - Long-Term Test: Month One 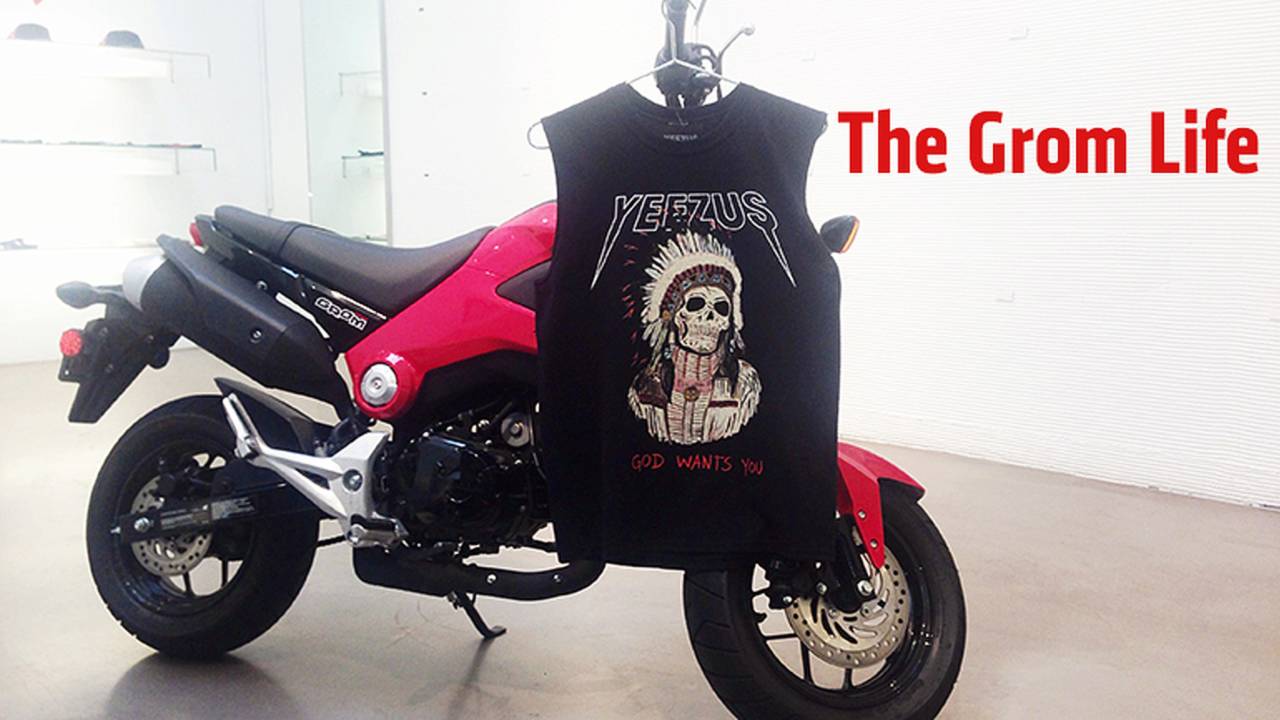 What's it like to ride a 2014 Honda Grom in the real world? We're living with one in Los Angeles to find out.

The tiny little Honda Grom is the friendly, fun face of motorcycling. We’re spending an extended period on one to see if a bike that can barely hit 60 mph can keep up in real world riding. This is what the Grom’s been up to during its first month with us.

The biggest adventure with the Grom so far was just getting it home from Honda’s headquarters in Torrance to my place in Hollywood. On most bikes, that’s about a 30 minute ride across the city, then down the 405 fwy. But the Grom’s not highway legal, so we had to hop on PCH and sit at traffic lights all the way up to Venice Beach.

That took a while, but while the Grom can’t get on the freeway, it’s more than capable of keeping ahead of even fast-flowing surface street traffic around Los Angeles. Acceleration begins to taper off around 45 mph, but it’s happy sitting pinned at 56 mph for minutes at a time, until the next red light.

I stopped at Deus for a (good) coffee and a (terrible) sandwich on the way. The Grom’s seat just doesn’t agree with my sensitive tailbone for more than about 30 minutes and their location at Venice Boulevard and Lincoln was a nice goal about 45 minutes into the one hour and 15 minute ride. As soon as I pulled in, Deus' art director Hiroshi Kang came running down from the office, helmet in hand. I threw him the key and he spent the next 10 minutes riding around the parking lot with a huge smile on his face. The Grom just seems to have that effect on people.

One of my biggest concerns about riding the Grom in LA’s heavy traffic was that its diminutive size would see it disappearing between cars. But so far, no more problems with drivers not seeing me than usual. While it is a small bike, it has a large presence (and a bright headlight). You sit upright on it, with good vision. While you can’t see over cars the way you would on a supermoto, the Grom at least provides equal vision to most sportbikes; your helmet ends up at about the same height.

Pretty much as soon as I got the Grom home, RideApart's CEO Jon called and politely informed me he’d be borrowing it for a little while. The little bike is ideally suited to the tight, hilly roads in the canyon neighborhood he lives in; I had a blast riding it over to his house, using full throttle pretty much the whole way. Riding home in a 2013 Porsche Cayman S was a stark contrast, you just can’t enjoy a car like that on most city roads.

I park the Honda Grom in my front yard; it makes an excellent lawn ornament.

Jon roared around the city’s canyons on it for a few weeks while I was traveling in Europe and really, really didn’t want to give the Grom back when I got home. I eventually pried the key from his hands, only to have it disappear again right away. A friend managing the pop-up store for Kanye West’s Yeezus tour called and wanted to know if it could spend a couple days there, helping them sell t-shirts.

I was honestly surprised they went for the Grom. While we motorcyclists know small equals fun, I didn’t expect non-riders to take it seriously. But, when I rolled it into the Melrose storefront, the sales girls and too-cool-for-school managers all lit up with smiles.

That’s been the reaction everywhere I’ve gone so far. No one laughs, the Grom genuinely makes people smile. They should try riding one, maybe we’ll do that next month.