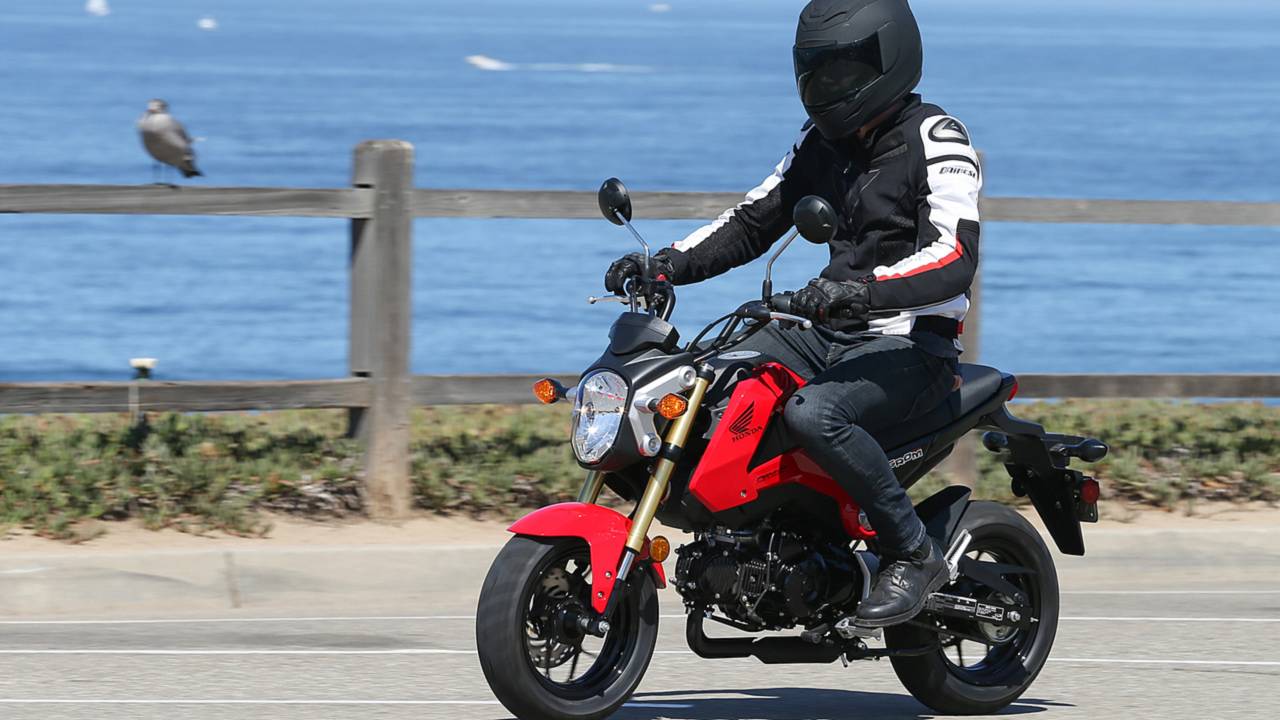 A monkey bike for the 21st century, this new Honda Grom promises small bike fun combined with real motorcycle practicality. We spent yesterday riding it around Los Angeles, then raced it against pro riders.

Known as the MSX125 in Asian markets, the Grom is based around Honda’s existing, four-stroke, two-valve, 125cc motor. Rather than the Continuously Variable Transmission (which operates like an automatic) of scooters, the Grom is fitted with a four-speed manual transmission and traditional clutch.

That motor is housed in a steel backbone frame supported at the front by 31mm, nonadjustable, USD forks with a big bike-like 3.9 inches of travel and, at the rear, by a monoshock with an, again impressive, 4.1 inches of travel.

The Grom’s motor delivers a respectable 9bhp, which is good for an indicated 56mph top speed and, wait for it…130mpg fuel economy. The dinky little bike weighs just 225lbs with its 1.45 gallon tank filled.

I picked up the Grom at American Honda’s Torrance, CA headquarters yesterday morning, stopped by Newport Beach for some photos, then rode down to Long Beach along the Pacific Coast Highway so Sean could take it for a spin. Afterwards, it was back to Honda HQ for an afternoon of gymkhana racing.

I put about 50 street miles on the Grom during the morning. While it’s too slow to get on the highway, it keeps up with surface street traffic just fine. Thanks to that four-speed manual gearbox, it’s got enough shove to beat pretty much any car away from a set of traffic lights and the tiny proportions see it lane splitting without a care.

Surprisingly, the Grom doesn’t feel that tiny out on the road around cars. The upright riding position, spacious ergonomics, 29.7 inch seat and stable chassis make you forget you’re riding something with a proportions of a scooter.

Unfortunately, you’re reminded you’re riding something with the performance of a scooter anytime you nee to climb a steep hill. If you’re climbing one, the Grom begins to run out of steam above about 40mph.

On a flat though, the engine is surprisingly punchy and fun to use. It accelerates with authority up to about 40mph, before settling into more a more gentle increase in speed up to its 56mph top speed.

Two solid hours on the bike revealed one weak point — the narrow, hard seat puts pressure directly on your coccyx, a particularly weak area for me and something that will lead to discomfort for most. Still, most people won’t be sitting on the Grom for that long a time, all in one go.

The same clocks and controls as Honda’s 500 range deliver a robust amount of information — speed, revs, fuel economy, fuel level etc — clearly, and the Grom is fitted with the same indicator switches and other controls as those larger bikes too.

Another weak point comes from the mirrors; the bars have a lot of rise in them and sweep back closely to your body, making the bar-mounted mirrors difficult to catch in your peripheral vision and, when you do, they reveal mostly elbow.

Still, this isn’t a bike anyone’s going to struggle to ride in real world traffic. It’s more than fast enough to keep up on surface streets and handles train tracks, potholes, bridges and any other obstacle with confidence and stability.

It was the parking lot race track that really highlighted how fun the Grom can be though. 60 racers or so — including top-tier pros like Justin Barcia and Melissa Paris — flogged the piss out of the bikes all afternoon with zero mechanical issues and only three crashes. Neither bike nor rider were hurt in any of them.

Wheelies, stoppies and burnouts were constant in the paddock, while out on track virtually everyone was backing the bike into corners, bouncing off the 9,250rpm limiter and just generally having a grand time.

Rather than the discomfiting flop most scooters exhibit when asked to lean way over, the Grom handles like a much larger motorcycle, confidently dragging pegs and levers without threatening to leverage the wheels off the ground. Steering is as fast as you’d expect it to be from such a small bike and, with so little weight carried so low, you can really use your body weight to make it even faster. Justin developed a quickly emulated tactic of standing up, then bouncing on either peg to rapidly steer the Grom through the course’s tight slalom sections.

Even very large riders like the 6’ 4” Alonzo Bodden fit well on the Grom and were able to wring full performance out of it. And, the Grom even managed to put a smile under the moustache of LAPD Chief Charlie Beck, who was racing alongside the rest of us.

All the stability, adult-sized ergonomics and on-road confidence of a real motorcycle in a fun-sized package.

Potholes, train tracks, bridge grates or other obstacles don’t upset the bike at all.

That motor is pulled from Southeast Asia’s Wave scooter, one of the best selling vehicles in the world. It’s simple, proven and absolutely bulletproof.

Totally unique looks combine with diminutive proportions to draw smiles and approval wherever you go.

Excellent handling combines with solid feel to create a confident rider. You can wring maximum performance out of this thing after only 15 minutes in the saddle.

You feel like a hooligan, then start wondering why cars are passing you and look down to realize you’re only going 20mph.

Much higher quality components, feel and just a way more complete package than you’d expect for $2,999. It feels as slickly executed as any other bike in the Honda range.

The seat isn’t comfortable enough for long periods in the saddle.

Mirrors are too close to your body to sit in your peripheral vision and, when you look down to use them, they only show your elbows.

At $2,999 the Grom is only $350 more than the 50cc Ruckus scooter, but delivers so much more. It’s a real motorcycle that can keep up with traffic, is a blast to ride anywhere and looks totally unique, because it is.

The Grom won’t be for everyone. It can’t go on the highway, you obviously won’t want to use it for long trips, it does require a motorcycle license. You’ll know it if you want one and, if you do, the Grom rewards you by exceeding your expectations. It’s silly good fun.