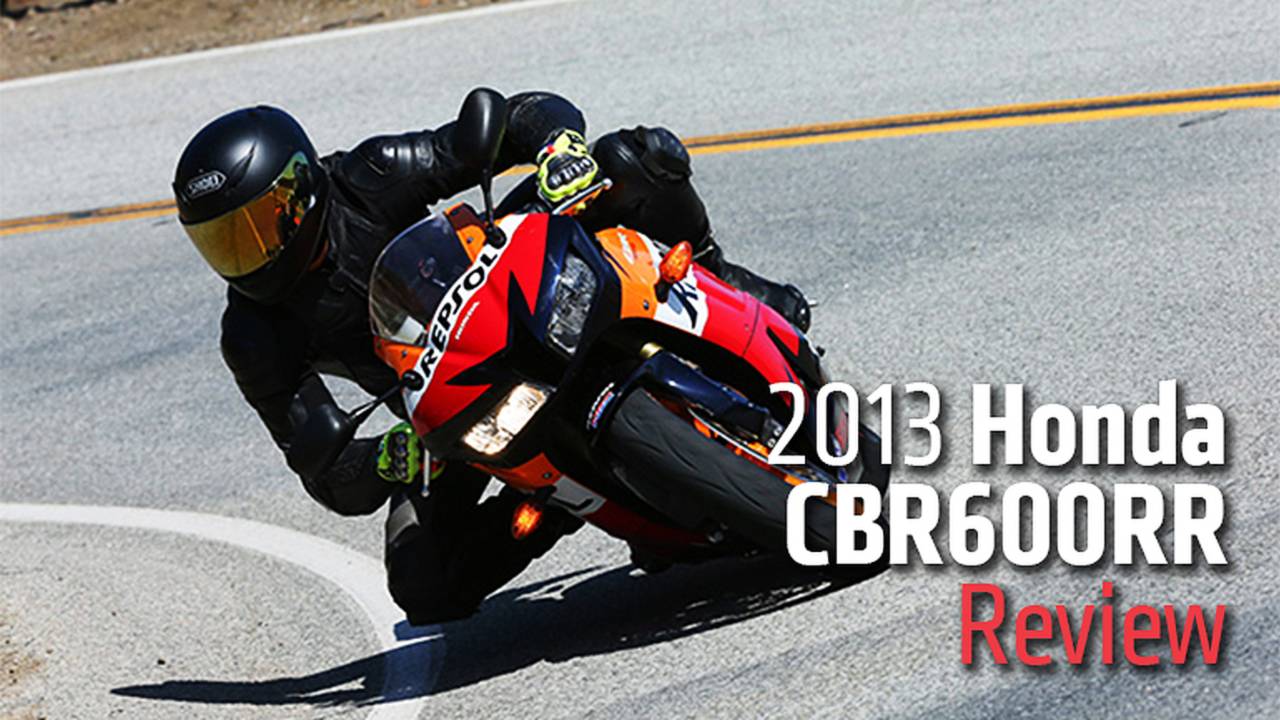 “The 2013 Honda CBR600RR, building on the platform of the previous model, has taken its performance to a new level,” describes the project’s large project leader, Hirofumi Fukunaga. “It delivers and awesome ride on the circuit and is even more enjoyable to ride on the streets.” But, can a few minor updates to the fueling, suspension and bodywork really achieve all that?

The most noticeable change is the whacky new headlights and large intake. The central ram-air intake has been redesigned and now works in conjunction with the headlights, which lead air from the outside, in. This helps equalize duct pressure within the inlet tract and works in conjunction with revised ECU settings to smooth out throttle response and boost mid-range torque.

Damper settings have also been updated in the Pro-Link shock.

Those funky new looks serve a purpose. Aerodynamic drag is reduced 6.5 percent, that along with the ECU changes, helps increase average fuel economy from 40 to 44mpg.

On the C-ABS model, some of the front bias at the rear pedal is dialed back, which should create less dive when using the rear brake, a change made based on race track feedback.

For the first time ever, the 600 is also now available with Repsol replica paint.

The plan was to depart Honda’s Simi Valley hub and head up Mulholland Highway for some corners before hitting Neptune’s Net on PCH for lunch. I wasn’t looking forward to having to follow other riders around my home turf, but Ken Vreeke was more than up to the task. As soon as we pulled off Route 23 and onto Decker Canyon, the pace went from Upright Citizien Brigade to do-your-best-Marc-Marquez-impression.

When was the last time you rode a totally unfamiliar bike seriously fast? It’s harder than it looks, but the Honda’s friendly, accessible nature cut through most of the challenge.

By the time we’d reached The Snake, I was able to relax and pay attention to the bike. The ergonomics fit my 6’ 3” frame better than that 2013 Suzuki GSX-R1000 did. So, in a relaxed and familiar state, I began pushing the envelope.

The 600RR is willing and able to do anything you ask it to. I was able to throw it up The Snake at my usual pace and did so with no surprises and in total control. Power delivery was super smooth and predictable, which is incredibly important at these huge lean angles on such a tight road. There’s just no margin for error. Handling is also neutral, yet precise. Altogether, the CBR is simply confidence inspiring. Wringing its neck is pure delight.

I’m less familiar with the route from The Snake through the canyons to Neptune’s. With Ken and Danny Coe behaving like two teenage club racers, I latched on and was able to use them as reference for the unfamiliar corners. On these fast, dirty roads, the CBR now felt like an old friend, leaving me free to concentrate on lines and avoiding patches of dirt and gravel hiding in the blind corners.

You can really feel the enhanced response of the BPF forks, the transition from on-brake to off in really tight corners is dealt with exceptionally smoothly.

I did have a brief, two-wheeled slide in one corner, where I miss-judged my line, then had to roll off for a second while leaned way over. The bike was predictable, resulting in an easy catch and very little pucker.

You can really feel the effect of that smoother fueling, its fast, precise, but not snatchy action is part of the reason I was able to get back on the gas and save that slide.

That game came to an end when my injured knee finally gave up and I had to roll off and wave everyone else by. Rode the rest of the way to lunch with my leg out straight!

The CBR600RR is really fun to ride fast and stupid on. It offers everything you need to go fast in confidence. Lightweight bikes like these are where its at in the canyons, compared to a literbike they’re light and neutral, resulting in high corner speeds without compromised stability.

Suspension, too, is noticeably higher quality, again boosting both confidence and outright ability.

I’m not a fan of how the front-end looks. I know it was designed to improve aerodynamics and aid the Ram Air system, but that doesn’t convey the same purpose the angular, original 600RR did way back in 2003.

The stock seat is a little slippery, you slide around a little too much as you brake and change direction.

The Repsol replica graphics look great, but don’t match the current MotoGP machines, seeming to lose the link between the showroom and race track.

While fueling is much improved, there’s till an abruptness around 5,000rpm when you’re using small throttle movements. Sadly, that coincides with in-town riding.

"The 2013 machine is smoother, too, in terms of ride quality and throttle response. The new BPF and revised damping in the shock yield more compliance at the top of the suspension stroke, so small bumps and ripples are more readily absorbed, which makes the CBR a better bike on the freeway as well as in the twisties. A new ram-air intake and revised EFI and Intake Air Control Valve (IACV) tuning contribute a tad more midrange power and marginally improve throttle response at lower rpm and smaller throttle openings, an area where the 2012 bike suffered." — Motorcyclist

"...the CBR’s front end is now even better at absorbing some of the harshest blacktop imperfections. Braking hard into a corner with minimal suspension travel left to cope with the ripples and cracks in the pavement, the Big Piston Fork was better able to absorb these sudden jolts than the 2012’s stanchions." — Motorcycle.com

Friendly, fast and comfortable, the 2013 CBR600RR remains our pick of the 600 class. Any bike that allows you to just hop on and go this fast, this quickly is special in our books, you’d be hard pressed to find anything else so good at both everyday commuting and weekend scratching.

Shout out to the Honda guys, they really ride!