A polite question on the Suzuki Inazuma 250 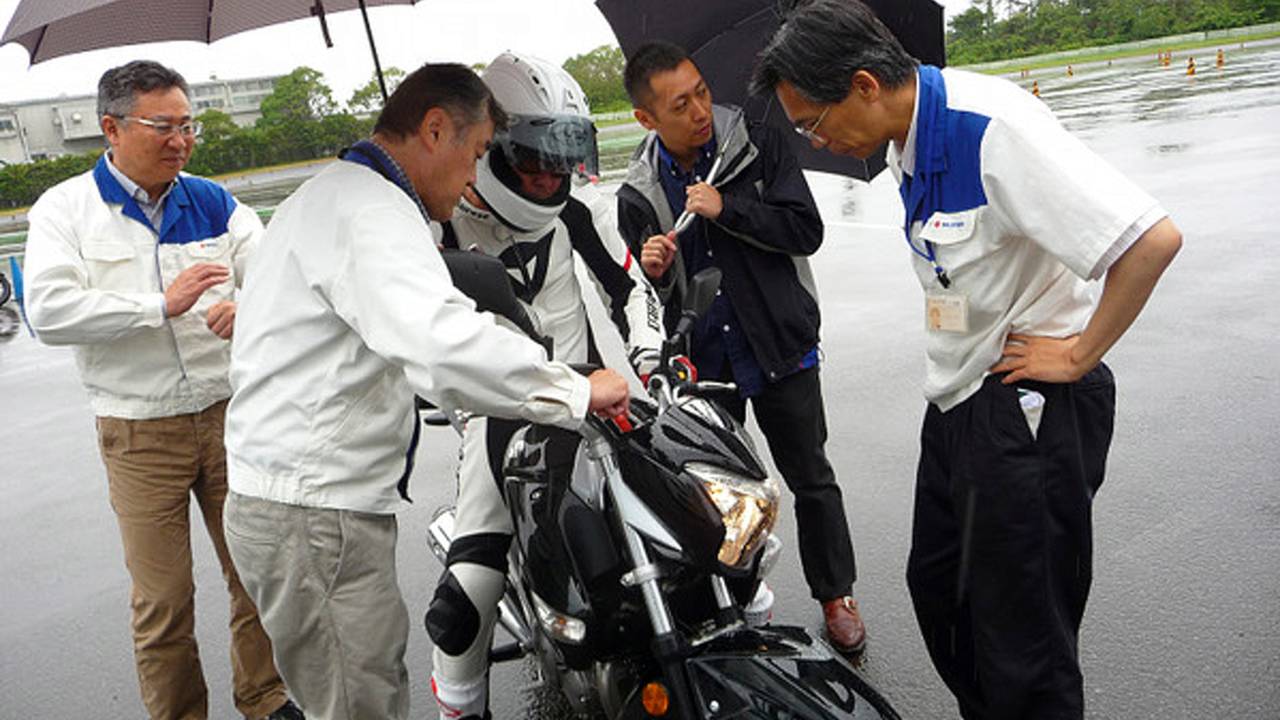 According to Suzuki, this brand new Inazuma 250 is supposed to ignite ‘the spark for your inner engine.’ But how waterproof is that sparkling feeling on the first day of Japan’s rainy season? Suzuki’s new quarter liter, made in China, designed for East and West. Except the US. Twin Spark Suzuki's strictly secret Motorcycle Technical Centre at Komaba Iwata-Shi. It’s easier to get Human ...

According to Suzuki, this brand new Inazuma 250 is supposed to ignite ‘the spark for your inner engine.’ But how waterproof is that sparkling feeling on the first day of Japan’s rainy season? Suzuki’s new quarter liter, made in China, designed for East and West. Except the US.

Suzuki's strictly secret Motorcycle Technical Centre at Komaba Iwata-Shi. It’s easier to get Human Rights Watch through Guantanamo Bay’s front door than a motorcycle journo on these premises. Eagerness dominates; what’s standing and happening behind these building walls? And what 2013, 2014 and other futuristic motorcycles are being developed and tested right here? A road ready Stratospere 6 cylinder perhaps? The long awaited V-Strom 1250? The GSX-R1000 for 2014?

The track itself has some infield 'touristic' roads which are situated inside a violently fast 'flat oval' with some knee down corners. In my memory this must be the spot where the first Hayabusa video has been shot, a movie presented for the very first time at the Hayabusa intro at the magnificent Spanish Catalunya racetrack. Watching this video in the early hours of a February morning in 1999, belly still filled up with a mixture of tapas and shiploads of Rioja, did cause some interestingly colorful underpants, even before climbing aboard the GSX-R1300.

Now I'm there, or here, at the main testing track of the Suzuki Motor Corporation.

But mouths, eyes and camera shutters have to remain closed today, privileged as this person is to be the only one invited, the only European, errr, correction: the only non-Chinese citizen in the world to ride the first Suzuki Inazuma 250.

Do not expect other scoops today; although the test riders and marketing hot shots of Suzuki Motor Corporation have arranged an impressive open arms reception for that humble European ridewriter, respect and privacy remain the main issues. When I take a stupid cell phone picture of a few Inazumas standing outside in the pouring rain, a complete non-picture, one of the Suzuki men insists I delete it. With a friendly smile, of course, but making the message very clear. Today is for my eyes only, and for the lens of the well instructed camera man. My stomach, a melting pot of sashimi, Sapporo beer, sea weed, teppanyaki and sake, feels relieved by the idea of only doing half the top speed a Hayabusa can reach.

The Inazuma name might ring a bell. Experts in the Japanese language will translate it as ‘lighting that strikes during a thunderstorm,” us motorcycle fans might recognize the name by the reliable, straightforward, so very boring GSX750 and 1200 naked models of the late ‘90s.

Apart from being naked, the Inazuma 250 is a totally different motorcycle, and not only by its twin cylinder engine and liquid cooling, where the former bikes used the fundaments of the legendary oil/air cooled GSX-R four cylinder power plant.

Do not expect exotic technology or mind blowing styling on the Inazuma 250, simply because it is built for entry users and/or commuters who check their wallet twice before spending. Suzuki considers it as the substitute for the good old GS500 twin for its budget friendly multi functionality. Whereas the air cooled half liter bike delivered 45 horsepower and 29.5lb/ft, the Inazuma 250 limits itself to 24 hp and 16.2lb/ft. Concept wise there may be a resemblance, power wise the Inazuma is in a different league: the growing quarter liter class.

Honda brought the refreshing CBR250R last year, Kawasaki smuggles some extra cc's in its fine Ninja 300, some Euro countries still do the basic YBR250, so the Inazuma cannot be considered as a lonesome cowboy in its class. On the contrary, this Baby B-King is in fact a capable motorcycle with decent, true motorcycle looks and a natural seating position. If a child would draw a motorcycle, it'll make an Inazuma. There's a good reason for the straight forward styling; where the ‘technical’, sporty CBR and Ninja-styling might scare off commuters, occasional riders as well as tourists, the Inazuma may eventually attract even a slice of the modern iPad & G-Star Raw generation as well. As long as they haven't been in touch yet with a (at least double the price) Monster 696, Brutale 675 or Harley 883, let alone KTM's smashing Duke 690. And although Suzuki's 'little lightning' is being manufactured in China, its built quality and finish is fully up to modern Japanese standards.

The Inazuma itself does not make a natural selection of customers. That means it has the truly amazing ease of use for every single human being on this planet who has ever moved on two wheels before. Jump on it, feel your footprints touch the ground (thanks to Inazuma's narrowness; the 30.7 inch seat height is easy), fire the twin up with a slight touch of the thumb and kick the side stand into position. Clutch, throttle grip, injection response and 6 speed gearbox feel as if they operate in the finest cold pressed olive oil, apart from a rare, less fluent shifting feeling in mid range, requiring a bit more left foot effort. Because of its narrowness and natural ergonomics, handling is fine and easy. Even on the soaking wet Japanese track, you can zigzag it on a square metre around obstacles and even adopt a (sort of) supermoto style, using the right foot on the very decent rear brake. The Inazuma is a lot more flexible and easy to handle than the impressive 403lbs of kerb weight suggests. But still... that's about 50 pounds more than Honda's CBR250R. Besides, the Inazuma does not have ABS (yet), a true must for a 2013 motorcycle, especially in the less experienced rider class.

The IRC Road Winner tyres are worth special mentioning: although Made in Thailand and not belonging to the league of Big Names, they are top quality, especially on dry surfaces. During a personal, non-stop 3-hours Endurance race on a Kawasaki Ninja 250 at the Spanish track of Alcarrás, these anonymous tyres made a huge impression on me, both by grip and durability. They (and me, I guess) would have survived easily a 6-Hours race.

Of course, the Kawasaki's 33 horsepower are not capable enough to chew these rubbers until the canvas and cause furious adrenaline rushes through your body and mind. Let alone that Inazuma's 24 horsepower. A 'spark for your inner engine' is surely the maximum the 180° twin engine will achieve.

To avoid a direct confrontation with Kawasaki's more powerful twin, the Suzuki engineers made an interesting development choice. In order to create some torque out of the double 124cc cylinders, Suzuki gave the engine a surprising long stroke at the expense of (high rev) bore. This 53.5 x 55.2 millimetre set up (Ninja 250: 62 x 41.2 mm) works; you should not expect the relative 'big bore torque' of the CBR250R mono, but Inazuma's usable efficiency is in the scale of 5,000 to 9,000 rpm. After the '9', the engine will rev on, but without serious additional acceleration. That is the reason Suzuki added an 'Eco Mode' in Inazuma's ECU, which cuts the revs at 9,000 rpm with the visual help of a true rev limiter light in the beautifully made dashboard. A blinking white rev light on a 250, how cool, sporty and, errr, useful is that? In this mode the Inazuma will consume only 78mpg, claims Suzuki, which sounds realistic, budget friendly and practical in combination with the 3.5 gallon tank and easy 185-mile range.

Once again, do not expect the Inazuma to be greased lightning, although it achieves a relatively easy 84mph at 10,000rpm with a little more to come. In crowded city jungles you will need to rev the engine, which it accepts beautifully and without vibrations, to avoid the attacks by turning cars, traffic jams or four wheel GTI-adolescents on a mission. The sum of qualities make the Inazuma 250 a far from spectacular, but natural, true, well made and cheap stop & go motorcycle, which (as far as I know) won't make it to the US. In France it will be sold at the end of the year (after months of delay) for € 3.999,-, so the same price as a non-ABS Honda CBR250R. Which is three hundred euros cheaper than the 26 hp, 275lbs (if empty) KTM Duke 200. Talking about a bike that generate sparks in your inner engine...

In the presence of Suzuki's international top marketeers, who celebrate this humble moi as if Kevin Schwantz has just set a new lap record on his old Pepsi bike, there is no escape to that one particular question that knocks in my head for weeks already.

After a long, traditional hesitation, the Suzuki factory explanation is about environmental limitations, such as the suffocating exhaust damping, ultra sober fuel mixture, use of catalysator, and the accentuation of Inazuma's mid range, extra stability etc.

Unless the kind and polite explanations by the SMC-delegation during the debriefing, I cannot ignore that the question was perhaps more convincing than the answer...