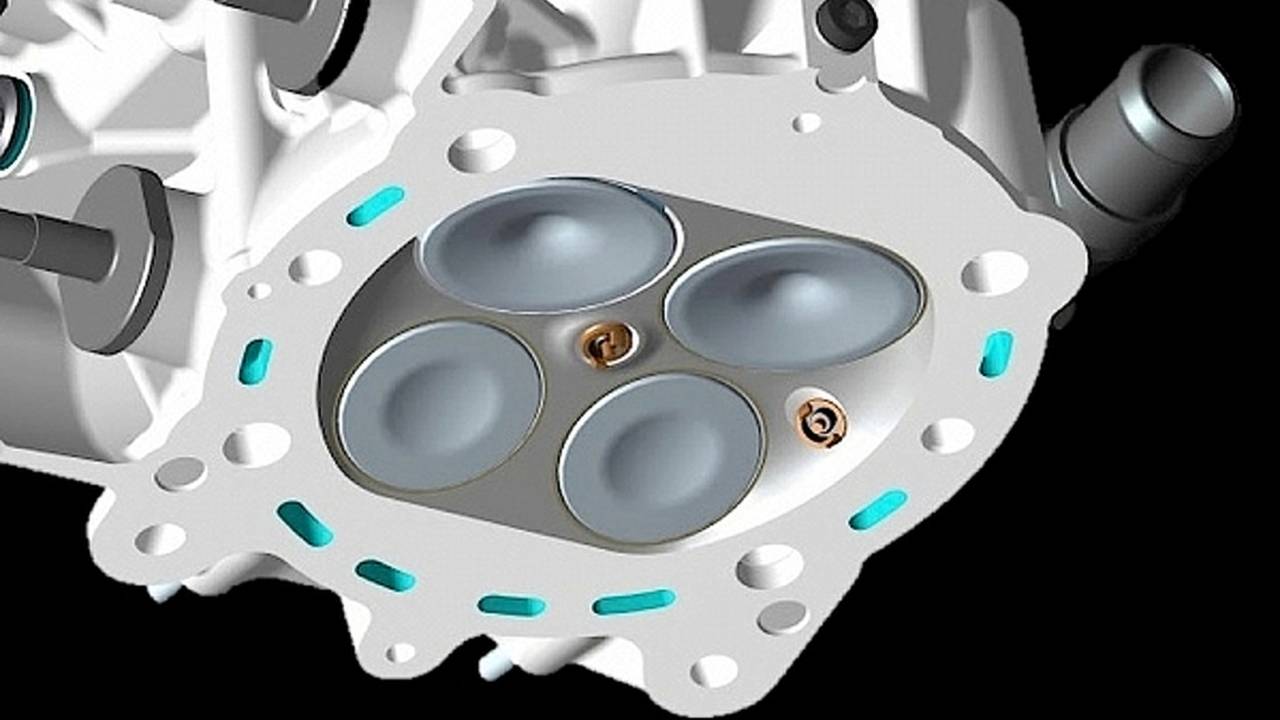 There are two main technical advances on the 2013 Ducati Multistrada 1200. One is a package of upgrades to the engine, but the second is the real headline: "Skyhook" suspension, semi-active electronics have arrived in motorcycles. The engine is the same basic Testastretta 11° which made its debut in the first Multistrada, so I'll concentrate on the changes. The fuel injectors on the new bike a...

There are two main technical advances on the 2013 Ducati Multistrada 1200. One is a package of upgrades to the engine, but the second is the real headline: "Skyhook" suspension, semi-active electronics have arrived in motorcycles.

The engine is the same basic Testastretta 11° which made its debut in the first Multistrada, so I'll concentrate on the changes. The fuel injectors on the new bike are angled more acutely along the line of the inlet tract so they spray the fuel directly onto the back of the hot inlet valve. The aim is to cause the spray to vaporise as this improves efficiency substantially - when it comes out of the injector nozzle it's in the form of very fine droplets, which don't burn anywhere near as well as a vapor.

The previous model's angling of the injector more directly across the intake duct was aimed at ensuring there was a mix of fuel evenly spread across the whole of the airflow, but this newer thinking suggests using the heat of the inlet valve to accelerate vaporization is more effective. It also has the useful side-effect of keeping the inlet valve cooler.

Ducati has also added a second spark plug to each cylinder. This introduces a second flame front, which means the full combustion process takes place in a shorter time, allowing changes to the ignition timing and reducing the pressure changes in the cylinder. This is important in improving the smoothness of the engine, and it's supported indirectly by the fitment of a secondary air injection system. This bleeds air into the exhaust ports right behind the exhaust valves where the temperatures are high enough to continue the combustion process. As well as preventing the escape of unburnt hydrocarbons into the atmosphere and stopping them from damaging the catalytic converter, this raises the temperature of the exhaust which speeds up and enhances the action of the cat converter, helping the engine to meet emissions regulations more easily.

The motive in fitting the air injection is to allow the injection of increased quantities of fuel on occasion. This also stabilizes the cylinder pressures across cycles for smoother running, and is one of the main factors in helping reduce the engine's tendency to hunt on a light, steady throttle, an issue which was an irritation on the old model. As a consequence, the torque has increased across most of the rev range, especially at lower revs, the biggest improvement being a 5 percent gain at the 7,500rpm peak.

The graph 'Performance - Stability and consumption' shows the Indicated Mean Effective Pressure Coefficient of Variation as a percentage on the left side. It's a measure of how much the pressure changes across the full cycle, ie two revolutions of the engine, and a lower figure points to a smoother, more efficient engine. The 2013 engine is significantly better at the low speeds and throttle openings, as the five different speed and gear readings indicate. And it really shows when you ride it.

The new suspension is motorcycling's first semi-active system, along with the BMW HP4's. It works by continuously altering the damping front and rear according to a wide range of parameters, but the most important is its response to the speed of movement of the suspension. This is measured by two sensors at each end of the bike. One is positioned on the unsprung mass so it moves up and down with the wheel. The other is above it, attached to the sprung mass - the main body of the bike. The constantly changing distance between these is integrated mathematically to determine the speed, and using this, the Skyhook ECU adjusts the damping to predetermined settings.

Because the damping is entirely electronically controlled it's possible to have a much wider range of damping settings than with a conventional system, or indeed Ducati's previous passive electronically adjustable system, DES. The graph shows just how wide the spread of available damping is, allowing the bike to cope much better with suspension extremes. Yet the system works extremely fast, capable of switching from maximum to minimum damping in just 10 milliseconds. This means if you're riding gently on a smooth road in a soft setting such as Urban and the fork damping is close to its minimum, then you find you're having to slam on the brakes to avoid a dog running out, the front damping will have switched to maximum compression damping well before the forks have reached the end of their travel.

The damping valves themselves are nothing like the conventional stacks of shims or tapered screws in conical holes you have in standard suspension. Instead, they're more like a slightly loose fitting piston in a cylinder bore which the oil flows around. The piston is part of the electric solenoid so its position can be changed very quickly by an altered electrical signal, altering the speed with which the oil can flow past it.

In the spring mass diagrams, k represents the suspension spring, while k-t is the inherent spring effect of the tyre, m is the mass of the wheel assembly and M the mass of the bike supported by the front suspension system (approximately half the mass of the bike, less the combined front and rear unsprung masses). The spring k is controlled and kept in check by the damping unit c, and it's this which is continuously varied in Skyhook, but fixed in passive systems.

The Comfort Index graphs, which measure the shocks coming through to the sprung mass of the bike, show how Skyhook system matches or slightly beats the best passive setting on various road surfaces, even though on some the hard setting is the best while on others the soft setting is the optimum. This is why it's not immediately obvious in terms of feel that Skyhook is any better than a conventional system. You need to try the bike in a wide range of conditions and discover how it always feels as if it's set up for them.

There are other parameters taken into account as well as the suspension movement speed, including the throttle position and speed of operation, the brake line pressures and whether or not the ABS has been activated, road speed and acceleration, so the suspension will adjust automatically when you're accelerating and according to how hard, as you apply the brakes and so on.

In the different riding modes the Skyhook system still has access to and makes use of the full range of damping settings, but switching from one mode to another changes its zero point. In Sport for example its zeroed towards firmer damping settings and it always returns to those in normal riding, while in Urban or Enduro it sits at the other end of the scale, providing a softer ride in normal conditions.

What the rider sees in the dash is shown in the Instrumentation image. The menu is navigated in the same way as before via the indicator cancel and two additional sliding buttons on the left switchgear. There's an increase in the information displayed in each mode, with horsepower, throttle response, DTC and ABS information, and for personalizing the suspension the display is different. Where the old showed the separate compression and rebound settings as 'click' numbers, on the 2013 S models, you can increase or decrease the damping harder or softer by two stages from the central medium default. This can be done in each of the four modes, so for example if Touring is too firm, you can change it to one or two softer settings, and it will stay there unless you change it back.

This article originally appeared on Ash On Bikes and is reprinted here with permission. Make sure you don't miss Kevin's review on the new Multistrada. Click into the gallery here.