Armed with attitude and ECE 22.06 approval.

Scorpion continues to craft the helmet’s outer shell from injected polycarbonate. The helmet comes in two shell shapes that span the XS-XXL sizing options. A quick-release chin bar adds an extra dose of attitude and a modicum of protection. However, the Exo-Combat II only achieves ECE 22.06 approval as a jet helmet as opposed to a full-faced unit. 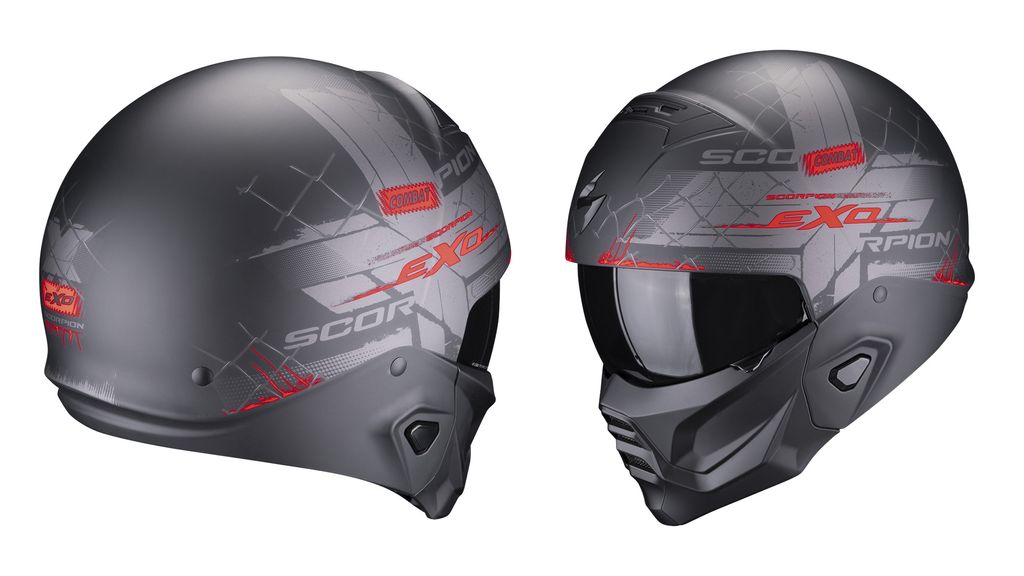 Mask or no mask, the Street Fight model sports a Speedview sunscreen. Scorpion not only improved the optical quality of the shield but also added an anti-fog treatment to preserve that crisp visibility. The hypoallergenic Kwikwick liner allows the user to remove and wash the helmet’s interior while a micrometric buckle chinstrap offers convenience, comfort, and safety.

Scorpion also prioritizes airflow with the Exo-Combat II’s ventilation system. Inlets at the crown of the helmet shuttle oncoming air into the helmet in jet configuration. Even when users attach the chin bar, three large air intakes at the muzzle maintain sufficient airflow.

The helmet brand offers the Exo-Combat II in a Solid Matte Black color scheme along with a Graphite Dark Gray option. When it comes to graphics, Scorpion doesn’t disappoint either. The Miles variant pairs a Matte Black base with Silver accents while the Xenon graphic comes in Matte Black/Red and Matte Black/White color combos.

Living up to Scorpion’s affordability standards, the Exo-Combat II retails for €199.90 (~$210 USD). Brimming with attitude, functionality, and adjustability, the latest addition to the firm’s Street Fight family will hit the streets starting in January, 2023.