If you can't Millyard your own, store-bought is fine.

Do you choose not to ride part of the year because it’s too cold and/or icy outside? As riders based in regions that are well-known for the viciousness of our winters, RideApart’s Great Lakes Bureau definitely feels your pain. While it isn’t the same as riding, that down time can be extremely valuable if you have maintenance or projects you want to do. Just ask the reigning king of shed build projects, Allen Millyard.

Tidying up your workspace, for example, can lead you to rediscover and/or reconsider the odds and sods you have just sitting around. In cleaning up his garage, Millyard uncovers not one but two Kawasaki S1 three-cylinder crankcases. Both look to be in pretty solid shape, so he makes a plan to craft a single four-cylinder using the two of them.

Now, we hear what you may be thinking. After all, if you’ve been witnessing Millyard’s completed builds for years, it’s not at all difficult to be both impressed and intimidated by his skills. Being enthusiasts doesn’t necessarily mean we have any special skills, other than probably being some unholy mixture of passionate and stubborn. So, we might think that it’s fine for someone like Millyard to tackle a project like this. After all, we may reason, he has the mind and tools to make it work. How many of us are really up for that particular challenge?

I’m gonna have to stop you right there, though, because here’s the really cool thing about watching Millyard’s most recent videos. In the case of his “How It’s Made” series, Millyard gives you a relaxing, calmly narrated, and—most importantly—detailed look into his workshop. Instead of just seeing a slideshow of the steps along the way, and then admiring his finished products at the end, this series is where he narrates all the small, important steps.

While it’s true that he has a well-outfitted workshop that many of us might envy, there are a bunch of other principles on display here that would serve all of us well when tackling all kinds of projects of our own. Above all, Millyard demonstrates a total investment in doing jobs thoroughly, carefully, and precisely.

Speeding through because he’s overexcited, or distracted, or otherwise not fully engaged with whatever he’s trying to do simply isn’t how the man works. Every task, no matter how seemingly mammoth it may appear at first, is easily broken down into a series of smaller, specific, and finite tasks that add up to a completed project. When you take it all apart, each process isn’t anywhere near as scary as the total assembly might make it seem.

Take those crank cases. He wants four cylinders, and he has two matching three-cylinder crank cases, right? After careful examination, he decides to take 2.5 cylinders from one crank case, and 1.5 from the other. His plan of attack involves taking a hacksaw down the middle of two separate cylinders (one from each bank), so he can eventually clean them up and weld them together to get the four-cylinder crank case he wants. 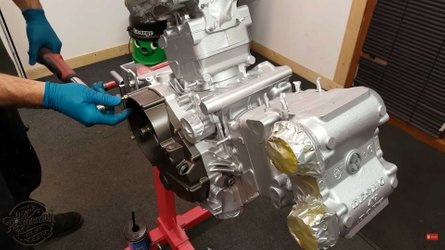 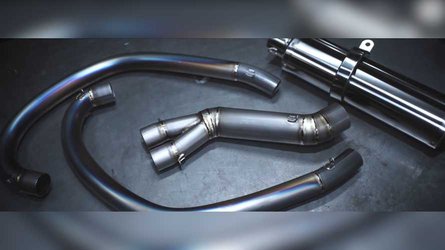 Watch A Master Fabricate A Titanium Exhaust For A BMW R100RS

To any of us who aren’t used to doing this kind of thing, it honestly sounds pretty terrifying—but once he calmly walks you through all the steps, it’s not so scary after all. Careful measurements—both before and after the cut—are key, and then it’s all a matter of smoothing things out and thorough pre-welding prep to set the welding process up for success.

To complicate matters slightly, Millyard then decides to fit four separate Kawasaki S3 400 barrels to those cylinders, which are a slightly larger diameter than the stock S1 cylinders. Seriously, we’re talking a millimeter, maybe a millimeter and a half.

True to his name, Millyard does actually have a nice vintage mill (though it’s in his shed, not out in the yard). It’s a simple, straightforward matter to bore those cylinders out to fit, which he does. In the next video, he says, we’ll see how he handles getting the crank together to properly fit the new crank case he’s just made.

All this, and Tracey makes some delightful oatmeal cookies as well. I don’t know about you, but frankly, this is all the winter inspirational project content I need. All I have planned for the moment is mostly maintenance-related, but that doesn’t mean I can’t think about the future. What about you, what do you have planned this winter? Lean into it, let it calm you, drink your favorite hot beverage, and make something cool for yourself.