Put Some Miles On This Honda CBR1000RR Repsol Edition

One-piece leathers are also included in the sale.

If you’ve watched “A Twist of the Wrist II,” then you might find this bike a little familiar. No, it’s not the exact bike used by one of the riders in the documentary, but it is close.

While ‘Twist II’ came out in 2009, this bike predates it by four years. This 2005 example of a Honda CBR1000RR Repsol edition is listed on Bring a Trailer, and it has only 450 miles on the clock. It’s no doubt a time machine in addition to being a pretty wicked machine itself.

The bike itself looks pristine with no noticeable dinks in the paintwork or the decals, and who could forget that iconic Repsol livery from the RC211V race bike? Until this day, the Honda Racing Corporation (HRC) still utilizes a very similar design, but this one is directly inspired by the same bike that Valentino Rossi rode back when he was still racing for Honda.

Powered by a 998cc inline-four-cylinder engine paired with a six-speed transmission, the CBR1000RR of this era produces 172 horsepower. In 2005, it was one of the fastest production literbikes that you could get.

Stopping power is provided by a set of dual disc four-piston Tokico calipers in the front, and a single disc, single-piston Nissin caliper at the rear. The bike also features hollow-spoke 17-inch aluminum wheels finished in orange and wrapped in Pirelli Diablo Corsa tires measuring 120/70 in the front and 190/50 in the rear. Being the supersport that it is, Honda fitted a fully-adjustable suspension with 43mm Honda Multi-Action System (HMAS) inverted forks and a Unit Pro-Link rear mono-shock attached to a double-sided swingarm.

Also, this bike gets Honda’s Electronic Steering Damper (HESD), and right above it is the tachometer that redlines at a screaming 11,500 RPM. There is also a digital display that gives you the time, a read-out for your speed, engine temperature, and that glorious odometer with only 450 miles on the clock.

You can bid for this bike on Bring a Trailer, and the seller even includes a one-piece leather racing suit as a bonus in a size medium. Though, remember, this is an iconic low-mileage bike that’s over a decade old, so the current bid is set at $15,000 USD—shocking, I know. Digging a bit deeper, I found a 16,000-mile unit on Iconic Motorbike Auctions that sold for about a third of the price of this one on Bring a Trailer—then again, low mileage is a value add. 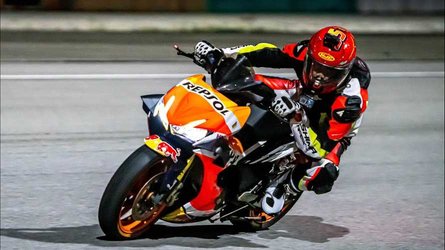 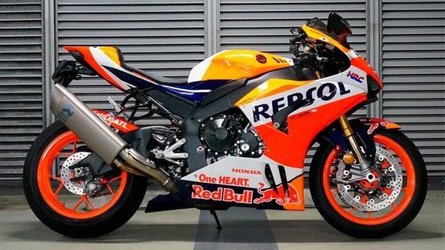