Royal Enfield introduced its 2021 Build Train Race road racing program participants and their bikes on Saturday, June 12, during the MotoAmerica round at Wisconsin’s Road America. After debuting in flat track form in 2020, this year the racing turns to the pavement.

Created in 2019, Royal Enfield’s Build Train Race is a female-only program that gives women the opportunity to showcase their building and riding skills on a large stage. A panel of judges hand-selected the participants, each of whom received a bone-stock Royal Enfield Continental 650. They were given three months to turn it into a custom road racer, with as much emphasis on character as on-track performance.

Seven female riders and their custom-built road racing machines were unveiled at Road America: Alyssa Bridges (California), Becky Goebel (Canada), CJ Lukacs (California), Kayla Theisler (Wisconsin), Michaela Trumbull (Wyoming), Scarlett Grosselanghorst (New York) and Trisha Dahl (Minnesota). To play up the competition side of things, they’ve all been given handles like “The Teacher,” “The Content Guru,” and “The Journalist,” based on their careers. You can watch their bios on the Royal Enfield YouTube channel.

Participants have varying levels of riding experience, though most are new to road racing. To get them up to speed with the challenge, Royal Enfield tapped Melissa Paris as a mentor. Paris, a well-known professional racer and mechanic, brings decades of experience on and off the track. She also helped each invitee with insight during the build process.

With the “build” part of Build Train Race now completed, participants have turned to the training element. The group recently completed a road racing course at Grattan Raceway in Michigan, and will continue to train with Paris. The culmination of the program is a three-race series held during the MotoAmerica rounds at Brainerd International Raceway (July 30-August 1), Pittsburgh International Race Complex (August 13-15) and Barber Motorsports Park (September 17-19). 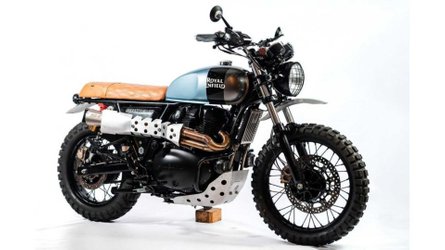 This Custom Royal Enfield Scrambler Is Ready To Hit The Trails 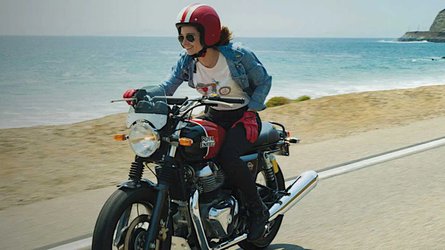 Royal Enfield Build Train Race Flat Trackers Show Off 2021 Bikes
By: Graeme Jones
++
++
Got a tip for us? Email: tips@rideapart.com