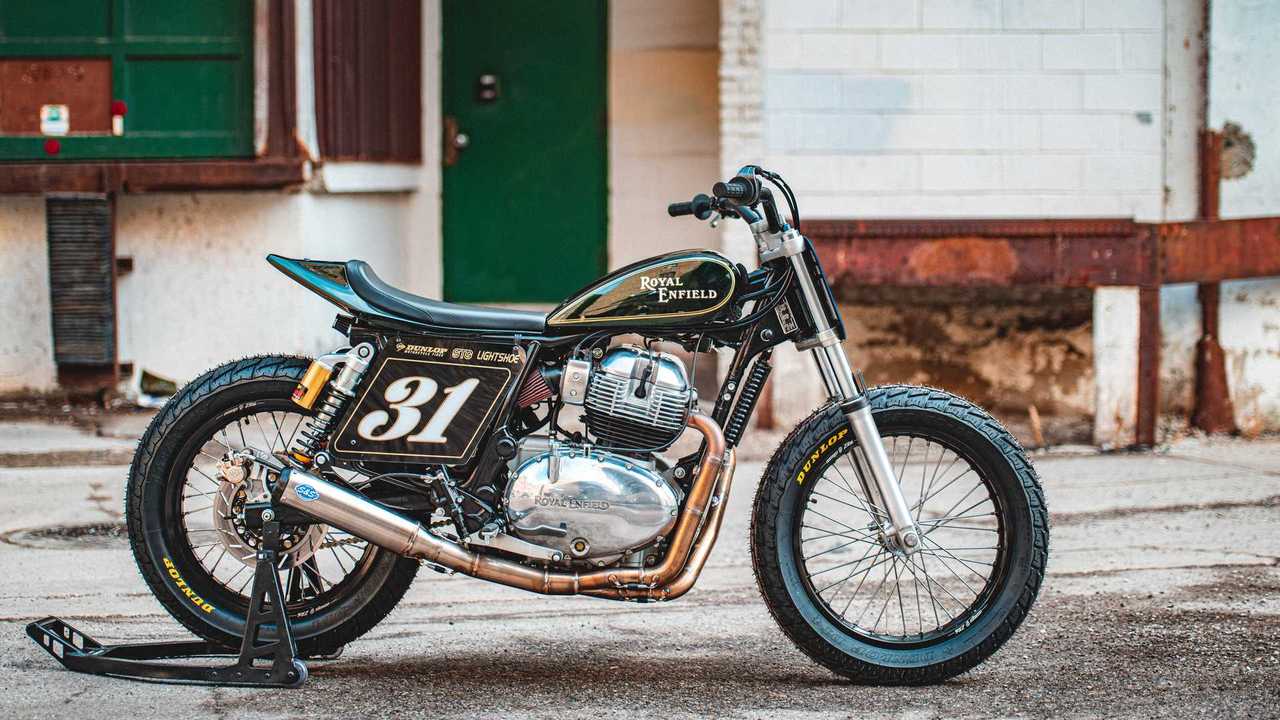 Behold the bikes and the talented women behind them.

The program was originally scheduled for the competitors to turn a stock Royal Enfield INT 650 into a race rig between November 15, 2019 and February 15, 2020. Thereafter, each woman would train for a flat track race at the Dixie Speedway on March 28. Of course, the Atlanta Flat Track event was postponed due to COVID-19 outbreaks earlier in the month, nixing two parts of the Build Train Race program. Despite the unfortunate unfolding of events, we can still marvel at the bikes the competition produced and the talented women behind them.

Who Runs The World:

Melissa Paris started riding motorcycles at 20 years old, and just one year later, she was already racing 150cc and 250cc machines. In 2009, Paris made her professional debut at the Daytona 200 and became the first woman to qualify for a World Supersport event. Her race resume also includes competing in MotoAmerica, capturing a Spanish CEV championship and participating in 24-hour World Endurance events.

For the Build Train Race program, Paris leaned on her sponsorship with Ohlins for front and rear suspension. She also added a sharp-looking flat track tail section and an S&S can to wake up the 650 Twin. While it’s a shame that Paris’ creation won’t be racing on the track, she sure made it look fast on the side stand.

As the owner of the DIY garage Moto Revere, Andrea Lothrop is no stranger to wrenching on motorcycles. Based in Canada, she enjoys a 50/50 split between riding season and rebuild season. Along with her knack for mechanics, Lothrop earned a BFA in sculpture, two skills that clearly informed her Build Train Race bike.

Opting for a minimalist design, Lothrop lopped off the two fenders and replaced the side covers with lightweight panels. The additional weight-saving from the Royal Enfield wings cutouts adds an aesthetic and purpose-built touch. While the majority of the build is all-business, the marble swirl tank and glittery purple patent leather saddle add just enough glam to the build.

The Portland-based photographer Lana MacNaughton started riding in her early twenties. Documenting her travels and the motorcycle experience through the camera lens, MacNaughton founded the Women’s Moto Exhibit—a traveling showcase that highlights women within the moto community.

For her build, MacNaughton took a very straightforward, no-frills approach. She slapped a few number plates on the side and front end, spooned flat track tires onto a pair of Sun Rims, swapped in a set of new bars, and fitted S&S silencers on the stock headers. Aside from removing the front and rear fender, MacNaughton left the factory bodywork intact. While MacNaughton’s build may lack the flair of the others, I bet she’d be less disappointed in the event of a race collision.

In only her second year of racing, Jillian Deschenes captured the District 23 AMA Flat Track championship in 2019. Previously, Deschenes also partnered with Royal Enfield to ride the S&S Flat Tracker Himalayan at the Speed Ranch in Viola, Wisconsin.

“I am really intrigued with Royal Enfield’s affordability factor,” Deschenes said. “I also appreciate and respect the enthusiasm Royal Enfield North America shows for women in motorcycling, and the opportunities they offer to everyday women riders such as myself.”

While Deschenes has a future in racing, she can also design a flat tracker with the best of them. From the forest green gloss paint to the retro pinstriping and Royal Enfield logo, the motorcycle enthusiast’s eye for balance and proportion are on full display with her Build Train Race bike. The Race Tech suspension, S&S cans, and Dunlop tires make sure that function lives up to form.

Though Royal Enfield had to foreshorten its Build Train Race program, we’re glad it shined a spotlight on women like Paris, Lothrop, MacNaughton, and Deschenes. We’re hoping the company continues to find in-roads for both flat track racing and women in motorcycling.