The Harley Pan America Storms Into The Indian Market

The MoCo's newest ADV is on a quest for global domination.

Harley-Davidson has finally launched its highly-anticipated adventure bike in the Indian market. The new Pan America is the embodiment of Harley-Davidson's evolution towards making itself accessible to a wider scope of riders. As the company's first venture into the world of ADVs, the Pan America is proof that Harley-Davidson is truly willing to go outside of its comfort zone.

In the Indian market, the Harley-Davidson Pan America has been launched in two variants—Standard and Special. Priced at Rs 16.90 lakh ($22,818 USD) and Rs 19.99 lakh ($26,990 USD) respectively, the new American adventurer is surprisingly competitively priced, considering the bikes are imported into India as CBUs (completely built units). Harley-Davidson has opened bookings for the Pan America, however, the actual delivery schedule of the bikes has yet to be revealed.

With the launch of the Pan America, Harley-Davidson is sure to gain quite a few new followers, especially in the India, thanks to its rugged terrain, and off-road loving population. With the company's local operations being handled by Hero MotoCorp, the new adventure bike will be made available across all of H-D's dealerships situated in twelve key cities. With the launch of the Pan America, as well as the upcoming debut of Harley's small-displacement machines, there is indeed a good chance for the MoCo to expand its footprint across India, and the rest of Asia.

The Harley-Davidson Pan America boasts a massive 1,252cc Revolution Max V-twin engine. Equipped with liquid-cooling, Variable Valve Timing (VVT), and fuel-injection, the Pan America pumps out an impressive 150 horsepower and 127 Nm of torque. On top of its impressive engine performance, the new bike boasts a slew of high-tech electronic rider aids and a nifty full-color TFT display from which various settings can be configured. The Pan America Special ups the ante in terms of off-road performance with a set of tubeless-equipped wire-spoke wheels complete with a tire pressure monitoring system, steering damper, and heated grips.

More On This All-New Adventurer 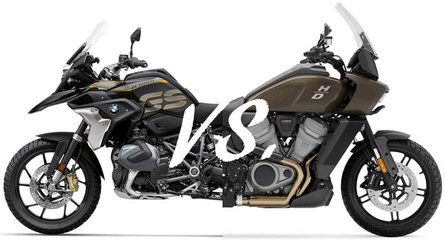