Don't get your hopes up just yet, this racing series is for Japan only.

The Kawasaki ZX-25R is considered by many as the only modern bike to carry over the spirit of the legendary multi-cylinder sportbikes of the 80s and 90s. Back in those days, sub-400cc multi-cylinder engines were all the rage with their sky high RPM limits and unmistakable exhaust notes. Unfortunately, the turn of the millennium saw the rise of high displacement performance machines capable of ungodly speeds. Along with the rise of the giants came the fall of small capacity multi-cylinder sportbikes.

However, things started to change when rumors of a Kawasaki Ninja bearing the same ethos as the legendary bikes of decades past began floating around a couple of years ago. Last year, Kawasaki unveiled what could quite possibly be one of the most anticipated bikes in the modern era: the Ninja ZX-25R. The lightweight sportbike's 249cc inline-four engine quickly propelled the bike into grassroots racing fame across Asia, particularly in Japan.

With the Kawasaki ZX-25R designed as an entry-level race bike legal to be ridden on the street, it was just a matter of time before Kawasaki actually went ahead and launched a racing series exclusively for this bike. That being said, Kawasaki has officially launched the Ninja Team Green Cup 2021 exclusively for ZX-25R owners in Japan who want to make the most out of their bikes.

In order to enter for a slot in this exclusive one-model race series, would-be participants must of course, be an owner of a ZX-25R, and attend KAZE Circuit Meeting, an orientation session designed to teach riders the fundamentals of track riding.  Once participants have developed their track-riding aptitude, they can now enter to participate in the Team Green Trial sessions, which offers a glimpse into the full-fledged racing experience. Of course, in order to advance into actual grid racing, riders will need to secure a Motorcycle Federation of Japan (MFJ) racing license, as well as all the appropriate gear required for racing. 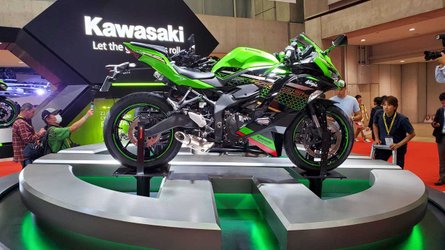