Having your motorcycle stolen is a terrible thing. It makes you want to do all kinds of nasty things to the people who stole your precious ride. These feelings are understandable, but you should not follow through on them. Mihai Dinisoae did and is now facing a murder charge after ramming the thieves off of his stolen Honda.

Early on the morning of May 3, 2020, Dinisoae awoke to the sound of Mikey Dunwiddie and Joshua Molloy stealing his motorcycle. Surveillance camera footage shows Dunwiddie and Molloy riding past Dinisoae's home on bicycles, then doubling back to steal the motorcycle.

Rather than call the police, Dinisoae hopped in his Vauxhall Vectra and chased down the thieves himself. The widespread use of surveillance cameras in the UK enabled prosecutors to show the court much of the chase that followed. After a brief chase, the thieves lost Dinisoae, but their paths crossed again and the real madness began.

The chase took a turn down a footpath, where Dinisoae hit the bike with his car for the first time. Back on public roads, the bike went straight across a roundabout, while Dinisoae went the wrong way around. Both vehicles were all over the road until Dinisoae hit the bike a second time, much harder than the first. This sent the thieves flying through the air toward a light post and a guardrail. Dinisoae took off, while people who had heard the crash came out to help. Molloy died on the scene from multiple fatal injuries, while Dunwiddie suffered life-threatening injuries but survived. 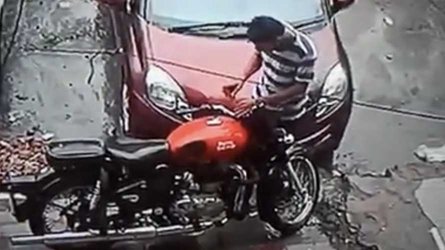 Dinisoae took a long way home and parked a distance away from his house. The next morning police found his car. He met with police, told them what happened, and was promptly arrested. He faces a murder charge for Molloy's death and another for grievous bodily harm to Dunwiddie.

The whole situation is sad. No one is in the right here. The thieves shouldn't have stolen the bike, and Dinisoae shouldn't have taken the law into his own hands. This also wasn't some major investment he was protecting. Dinisoae had paid just £450, just under $600, for the bike a month before. That's not worth dying for, nor spending time in prison.

If you witness your bike being stolen, please don't do this. Call the police and let them handle it. Even if you are able to follow your stolen bike—safely, not in a high-speed pursuit—give the police your location and let them make the arrest.