President-Elect Joe Biden Is A Biker 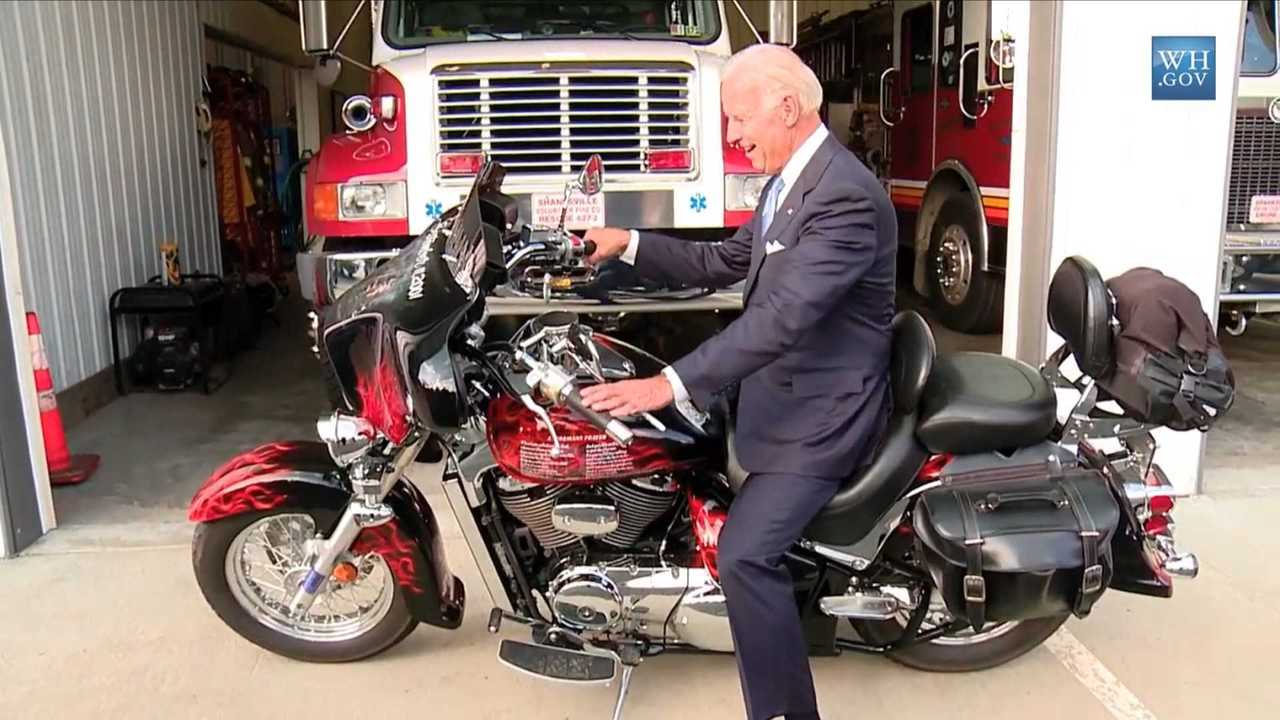 Known for his love of cars, Biden also likes motorcycles.

Media outlets are now calling the contentious 2020 Presidential election in favor of Joe Biden. We won't dive deep into the politics of it, but rather focus on the important issue: How does Biden feel about motorcycles? There are some historical indications that the President-Elect is, in fact, one of us.

Biden's love of fast cars, specifically Corvettes, is no secret. In 2014 he cited this as a compelling reason not to run for President at a United Auto Workers union conference. "There's a lot of reasons to run for president, but there's one overwhelming reason not to run for president. I'd like to get that [Corvette] Z06 with 0-60 in 3.4 seconds." Biden is quite proud of his 1967 Corvette Stingray. When the Secret Service grudgingly allowed him behind the wheel with Jay Leno in 2016, he immediately ripped a smoky burnout.

So what about motorcycles? In 2015 he swung a leg over a bike to join Governor Cuomo and Billy Joel on the September 11 Memorial Ride, retracing the route FDNY Rescue 1 took that fateful morning in 2001. This must have been a relief to him after he was caught on video lamenting not being able to ride away on a Harley-Davidson, again due to Secret Service concerns.

Despite his love of American muscle, Biden isn't strictly a Harley guy. While getting a haircut in Cincinnati, Ohio at a 2018 fundraising event, photographers captured him sitting on his barber's Suzuki Hayabusa with a huge grin on his face.

Even The Onion has poked fun at Biden, the biker. In 2019 they published a parody article about him getting his campaign bike out again, a 1979 Harley with a flame paint job that he allegedly won in a 1981 drag race against former Speaker of the House Tip O'Neill. Obviously, the article is false, because it's The Onion, but it does contain a grain of truth.

What can we expect from the 46th President in terms of motorcycle policy? At the moment he has more pressing concerns, such as ensuring that his claim to the office is legitimate despite President Trump's claims to the contrary, not to mention this little problem of the coronavirus running unchecked across the country. In early 2020, though, he did make a campaign stop at the National Motorcycle Museum, which indicates that bikes are still on his mind. Perhaps he'll be on better terms with Harley-Davidson than Trump's on-again, off-again relationship.

It's Good To Be The King:

Turkmenistan's President Wants You to Know He's a Badass Too