We're gonna have to go right to 'ludicrous speed.'

Just because you have a fun bike doesn’t mean that it can’t be better. Take a Honda Grom, for example. While they’re a blast to ride around town, for some reason, the little MSX125 seems to inspire an awful lot of madness in an awful lot of people. Project Electrom stuffed an Alta Redshift powertrain into a Grom, bumping it up to a 50 horsepower and 42 lb.-ft torquey mini-beast. YouTuber Motonosity is currently building a stretched, slammed 300cc Grom drag bike.

What you’re seeing here doesn’t just take the cake, though; it probably takes an entire bakery case. A couple of friends that just like fabricating their own stuff for car and bike builds run a YouTube channel called Freedom & Company, and they decided to transplant the 698cc parallel twin out of a 2017 Yamaha FZ-07 into an unsuspecting 2015 Honda Grom. You know, as you do.

The Very Model Of A Modern Modest Moddable: 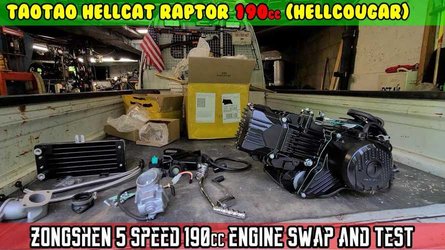 This Honda Grom Clone Gets A Big Block Upgrade
⠀ 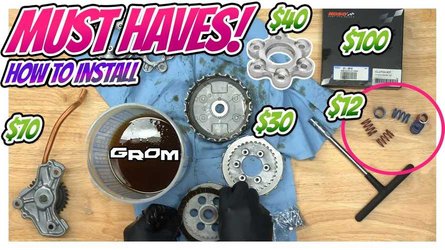 It’s all a quest to build a 150 mph Grom, to be tested at the track, of course. This channel, incidentally, has posted other car and bike projects, and its projects seem to overlap. Sometimes they’ll work on one project, sometimes another, but momentum does seem to keep flowing as new parts come in, which is excellent if you’re a subscriber. At any rate, F&C started the Grominator project about a year ago, in July 2019. As of June 14, 2020, they took it for its first ride since completion, which you can see in this video.

As you might guess, a whole bunch of work went into successfully bringing the Grominator build up to this point. You can see the entire playlist here next time you’re trawling YouTube and looking for something to watch. Among other things, it needed an entirely new frame to support the much heavier FZ-07 lump, as well as a unique fuel system setup that involved stowing some absolutely hilarious auxiliary fuel tanks underneath the saddle. All told, there’s plenty of welding and custom fabrication work here, because that’s what these guys like to do. If you’re gonna go big like this, those are skills you want to have.

The guys started this project because they wanted to do something that hadn’t been done before, and also have fun doing it. Really, what better reasons do you need? Also, both the base Grom and the donor FZ-07 were purchased as salvage bikes from an insurance auction. So, in a way, they’re also doing the world a service by recycling these poor, abused, discarded bikes into a single, amazing project. Thanks for hooning responsibly, Freedom & Company!