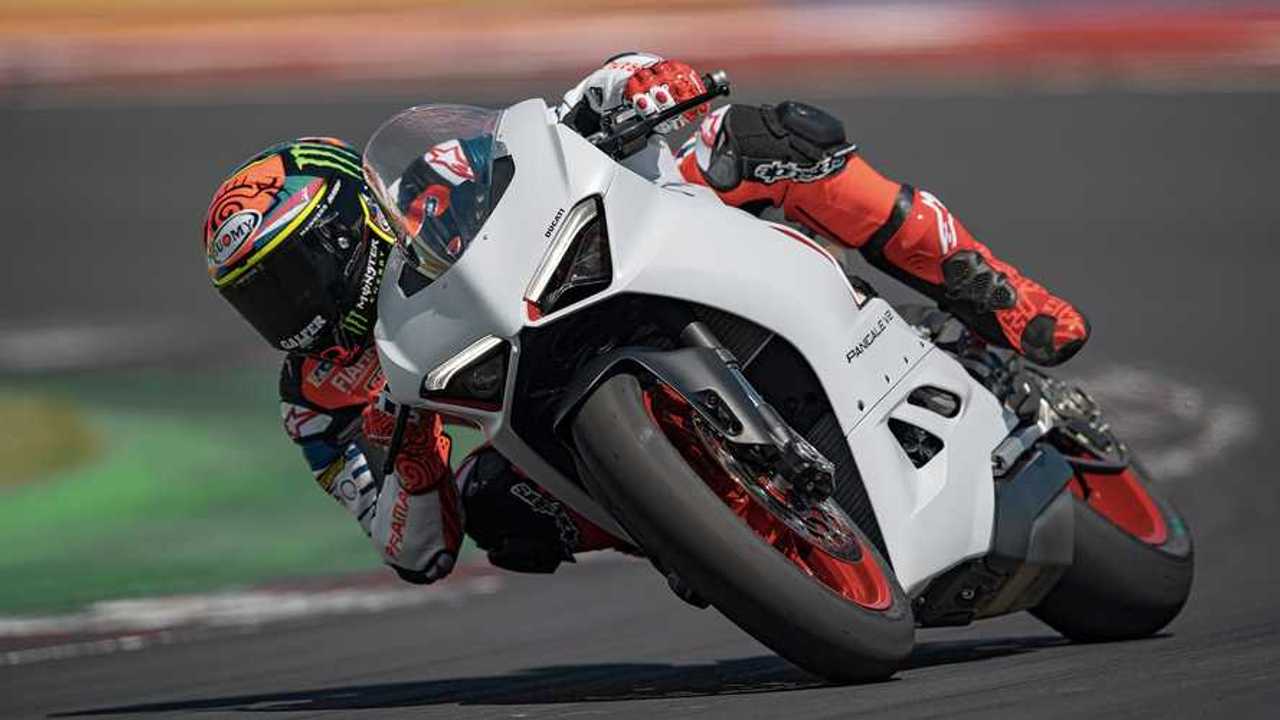 Ducati and red go hand in hand. Red is a color that evokes passion and emotion—something the Italian firm is more than familiar with. It's no wonder most sportbikes that roll out of the Borgo Panigale factory are clad in Ducati’s now-famous Rosso livery. To be fair, it’s also the only color available for some of those models. As they say, you can get your Panigale or your Streetfighter in any color you want, provided that color is red.

Ducati decided to shake things up a little bit by introducing a new, non-red livery for the 2020 Panigale V2. This time, the Pani is Star White Silk, with a few red accents, of course.

Not all Ducatis come in red all the time. We’ve seen black Monsters, white 959, and Scramblers offered in all shapes, colors, and sizes. It’s always a bit of an event when the manufacturer steers away from its safe color space and does things a little un-Ducati-like on the color front. It was recently the case with the introduction of the Hypermotard’s new Graffiti livery and it’s now the case for the Panigale V2’s White Rosso color scheme.

The model was first unveiled in November 2019 as the new entry-level model in the famous Italian sportbikes lineup. First and only colorway available at the time? You guessed it: red. A very limited choice of color but nothing unusual for the brand. Well, if red doesn’t match your complexion, we have good news! You will now have the choice of a new Star White Silk colorway.

To keep things interesting (and on-brand), the matte metallic white paint is paired with a few strategically-placed Ducati Red accents including the wheels, the air intake vents under the headlights, and the air deflectors on the sides. Ducati also used a bigger “Panigale V2” badging positioned on the fairing—a feature inspired by the Ducati Corse bikes.

The Ducati Panigale V2’s White Rosso livery will be available in the U.S. in August 2020. The manufacturer didn’t specify whether it will come at a premium over the base red model or whether both paint schemes will be priced the same.

"The Red Essence. In White": New Livery for the Ducati Panigale V2

Borgo Panigale (Bologna, Italy), 1 July 2020 - The color range of the Panigale V2 is extended with the new White Rosso livery, which goes alongside the monochromatic Rosso Ducati livery with which the bike was presented last November.

The new White Rosso livery has Star White Silk as its main color. The predominance of white enhances the design of the Panigale V2, highlighting the lines and the purity of the geometrical shapes. At the same time the details in Rosso Ducati emphasize its sporty and powerful character. Rosso Ducati colors the rims, the front air intakes and the deflectors of the upper half-fairings. These last two red touches ideally accompany the path of the airflows inside the motorcycle, i.e. those that feed the engine and those that pass through the radiator.

This new livery is completed with an additional touch of sportiness thanks to the positioning on the lower half-fairings of the large Panigale V2 logo, inspired by the graphics of Ducati Corse motorcycles.

Testimonial of the Panigale V2 and protagonist of the photo and video shoot of the new livery is the rider of the Pramac Racing Team, Francesco "Pecco" Bagnaia. In fact, Pecco was able to enjoy a preview of the bike by testing it at the Misano World Circuit "Marco Simoncelli."

“Since 2016, my personal motto has been #GoFree. For me it means living in a light-hearted and carefree way, having fun and giving priority to the things you love to do. I think the Panigale V2 fits well with this definition and reflects my way of being, “ said Pecco Bagnaia after trying the Panigale V2. “The new livery, so white, is very beautiful and different from the usual. Despite being a street bike, it surprised me how much speed it can have when cornering. It is a fun, very stable and very sincere bike that allows you to go fast, safely, without becoming tired, while having a very strong and decisive character and personality. "

The Panigale V2, presented less than a year ago and capable of immediately conquering an enthusiastic public, is the super-mid of the Ducati sports bikes and represents the entry model to the Panigale family. It is powered by the 955 cc Superquadro twin-cylinder engine (compliant with Euro 5 standard) and has a maximum power of 155 hp at 10,750 rpm and a maximum torque of 104 Nm at 9,000 rpm. The power of the Panigale V2 allows riders to have fun on the track, delivering a motorcycle in the hands of the rider that never puts you in difficulty and can always be fully exploited. The delivery of the twin-cylinder is such that more than 70% of the maximum torque is constantly available beyond 5,500 rpm, allowing to get out of the corners quickly, even the slowest ones.

The chassis of the Panigale V2 is based on the monocoque frame and is dressed in an elegant and sporty design inspired by that of the Panigale V4. The fairing has extensive and clean surfaces that surround the mechanical components, enhancing the small size of the Superquadro twin-cylinder and creating a visually compact motorcycle.

The "family feeling" with the other Panigale models is also underlined by the single-sided swingarm, while the compact-sized single lateral exit exhaust, with under-engine silencer, emphasizes the clean lines of the Panigale V2.

The complete and modern electronic equipment, based on the 6-axis inertial platform, leaves no doubt about the sporting DNA of the bike. The electronic package, dedicated to active safety and vehicle dynamics control, includes the "cornering" functionality applied to the Bosch ABS, an electronic gearbox, with operation also in downshift and traction, engine braking and wheelie controls. All the controls are integrated into the three Riding Modes (Race, Sport and Street) that can be modified via the 4.3” TFT color dashboard with graphics and interface designed to make menu navigation and setting adjustments intuitive, as well as the immediate identification of the selected Riding Mode.

The chassis has fully adjustable suspension with a Showa Big Piston Fork (BPF) 43 mm in diameter and a Sachs shock absorber set up to make the bike intuitive, agile and fun; in addition, the specific calibration of the hydraulic brakes makes it comfortable for road use. Pirelli Diablo Rosso Corsa II multi-compound tires, which combine track performance with versatility on the road, also contribute to the dynamic qualities of the Panigale V2.

The ergonomics of the semi-handlebars and the rider seat offer a non-fatiguing position on the road and an efficient one on the track, thus allowing the rider to move freely.

The technical equipment is completed by a Sachs steering damper and by a Brembo braking system with M4.32 monobloc callipers activated by a radial brake master cylinder. The discs are 320 mm in diameter at the front with a single 245 mm disc at the rear. Braking is powerful, never excessively aggressive and always adjustable.

The Panigale V2 in White Rosso livery will be available in U.S. Ducati dealerships starting in August 2020.