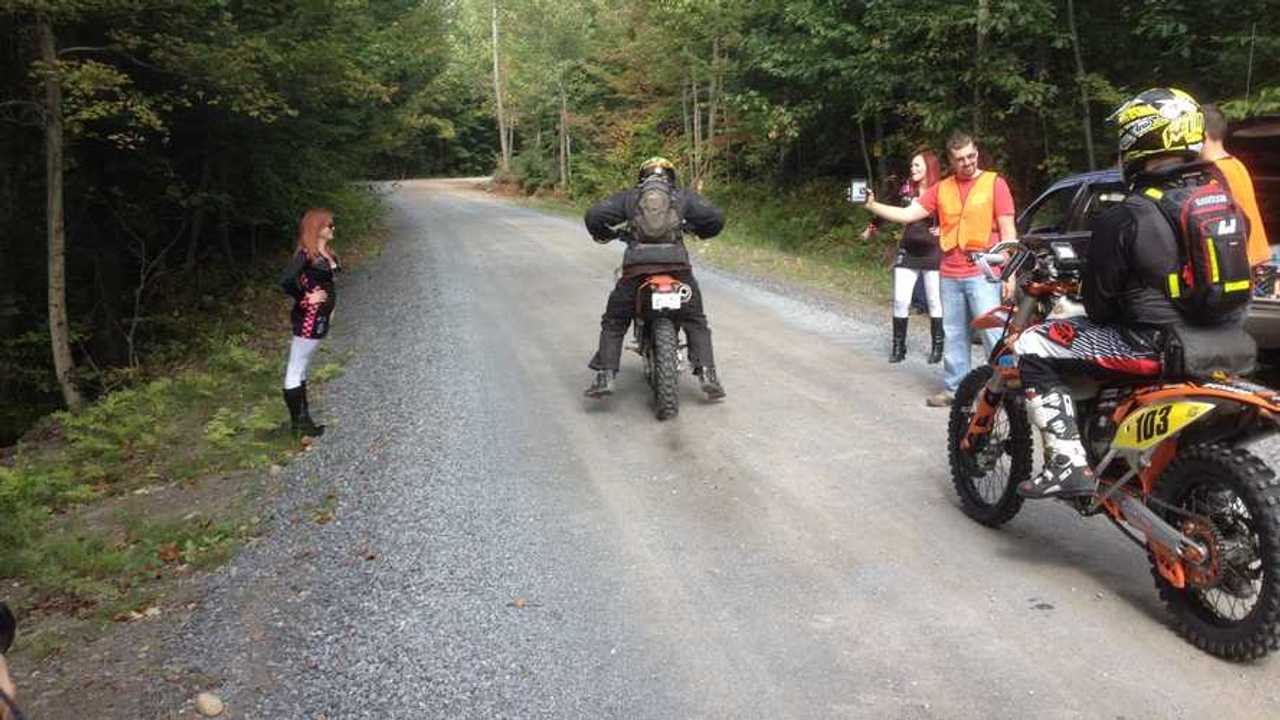 I've just spent this weekend volunteering at the Empire State Performance Rally, a stage rally for cars in New York state. I love rally racing, and volunteering is the closest I've been able to get to actually competing in a rally car of my own. There are a few events, though, that also allow motorcycles to race on the very same stages. Now that I have a dirt-capable motorcycle of my own, I'm seriously considering entering a NASA Rally Sport RallyMoto event.

I Need Some Practice First:

For those who don't know, stage rally is a form of racing that takes place on closed sections of road rather than a track. One car at a time enters the stage and races against the clock, not wheel-to-wheel with competitors like rallycross. Racers travel on public roads from one stage to the next, meaning that their specially prepared rally cars are actually street legal. Their times from each stage are added together, and whoever finished in the least amount of time is the winner. There are various classes of cars, but all require extensive safety modifications, such as roll cages, to be allowed to compete. The cost of a dedicated race car is what has kept me from entering a rally myself. The closest I've gotten to it is driving and co-driving sweep and course opening vehicles.

Among the various sanctioning bodies in the US, NASA Rally Sport is unique in offering a special program specifically for motorcycles, which it calls RallyMoto. You get to run the same rally as the cars, racing as fast as you can down dirt roads, with occasional service stops to refuel and repair your bike. You don't get a co-driver the way the cars do, so it's all about your skill as a rider and how well you can read the road ahead.

Interestingly, bikes require few additions or modifications to compete, and the safety requirements aren't much beyond the riding gear you should be wearing anyway. In addition to a road-legal motorcycle, you need to carry a first aid kit, a reflective warning triangle, and a laminated OK/Red Cross sign. These last two items are standard equipment for rally cars and are used to warn competitors approaching from behind that you've gone off the road. You use the "OK" sign to inform them that you're unhurt and they should keep on racing. If you need medical attention, your bike is on fire, or there's some other major emergency, show the "Red Cross" sign, and that competitor is obligated to stop and help you. Finally, you'll also want an enduro scroll reader. Instructions on how to get to and between rally stages will be given to you in a format that will fit in one of these.

Required safety equipment includes a helmet, back brace, and hard-ankle motocross boots. Since you'll be riding down real roads at high speeds, you're probably going to want all the armor you can get to protect yourself from mishaps. Additionally, if the event you enter has any night stages, you'll need to attach battery operated lights to yourself so that you can be found if you crash and are separated from your bike. Extra lights for your bike are legal, but not required.

Naturally, the vast majority of bikes entered in RallyMoto are dual-sports. When I drove the sweep Jeep for motorcycles in 2014, however, Max BMW entered a number of vintage BMWs, modified with knobby tires and beefed-up suspensions for the dirt. Bikes are classed by engine displacement, and there are virtually no rules on what modifications are and are not allowed. RallyMoto is more about the skill and guts of the rider than how tuned the bike is.

With the addition of the required equipment and a fresh set of knobby tires, my Kawasaki KLR 650 could run in RallyMoto virtually as-is. It wouldn't be fast, because KLRs more closely resemble tractors than rally cars, but it could do it. Honestly, if I was to enter a rally, my only goal would be to make it to the finish. Rallies are hard on any vehicle, car or motorcycle, and many don't make it to the end. Besides, I wouldn't be in it to win, especially my first time out. I'd be in it for the experience, to actually compete in a rally like Travis Pastrana or Colin McRae.

Word has it that Black River Stages, another rally held in New York, is coming back for 2020. Black River Stages has traditionally offered RallyMoto as well as the usual car classes. It's time for me to start planning ahead.