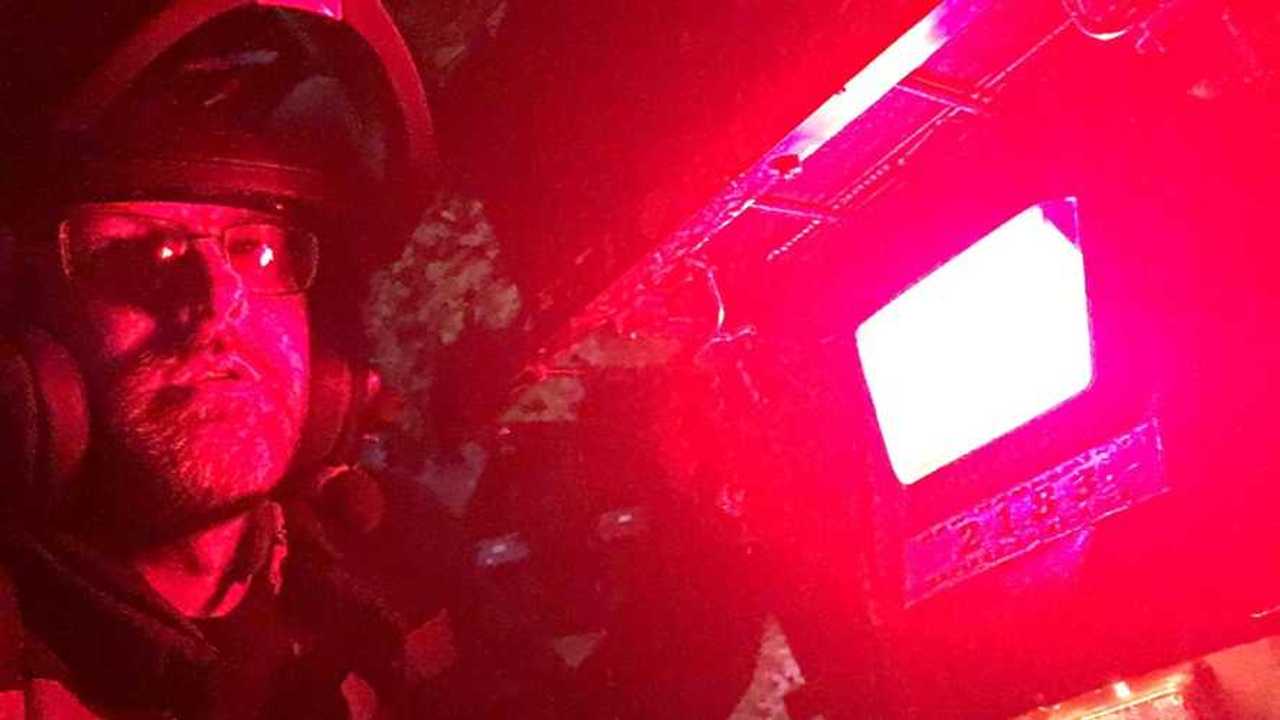 When it got dark, I called the police—on myself.

I was in a bad mood on Tuesday night. I needed some dirt therapy. After work, I geared up, hopped on my KLR, and went looking for some new dirt roads or trails to ride.

The Bike Is Not To Blame:

I ended up wandering to Lyndeborough, NH, where I turned down a dirt road. The maintained section of this road ended at a gun range but a well worn double-track continued beyond, into the woods. This was exactly what I was looking for, so off I went. The trail was in good shape for a while. It got a bit rocky in parts but I just slowed down and worked my way over and around the rocks. It was downhill, which made it easy with little or no power required. I went past an intersection, then continued downhill to a dead end. It was a beautiful location in the woods. A stream had carved a deep chasm through the rocks, which were cropping up through the dirt all over. Then I turned around to head back.

That's where the fun ended. The hill didn't look that steep but the rocks were wet from recent rain, significantly reducing traction. I had a great deal of trouble getting over one particular ledge, spun the back wheel, came to a stop, and dropped the bike. Bummer. I wasn't hurt and the bike can take the beating. I picked it back up, then muscled and power walked it (using the engine to propel the bike without me on it) up onto dirt. This took a great deal of my strength as well as time. It was starting to get dark. I rode back to the intersection, then attempted the side trail.

New England's picturesque stone walls don't exist because people enjoyed building them. They exist because of colonial farmers who kept pulling rocks out of the ground and dumping them alongside their fields. When ancient glaciers receded, they left zillions of small rocks buried in the ground, which regularly find their way up to the surface. A perfect example of this phenomenon is the side trail I attempted to ride. Soon, it turned into nothing but slippery wet rocks sticking out of the ground at all odd angles. I gave up on this trail too. I didn't trust my mediocre riding skills enough to bounce over these rocks without falling off the bike and hurting it and/or myself.

After a 180-degree pivot on my kickstand, I tried going back the way I came. It was longer but at least I'd seen it before, which was good because it was getting quite dark now. What was an easy downhill on the way in became a difficult rocky uphill on the way out. Even worse, under the trees, it was even darker. My headlight and its Cyclops LED bulb on high beam didn't light the trail adequately for me to see the slippery wet rocks. I dropped the bike again.

Picking it up took nearly all of my remaining strength. The KLR 650 weighs over 400 pounds wet, so it's no lightweight. I stopped to ponder my options. Soon, I realized I had none. I couldn't get up the hill I'd come down. I couldn't get over the rocky trail. I was physically exhausted. I was also dehydrated since I hadn't planned to be out for a long or difficult ride and hadn't brought water. I didn't know where I was, and by now it was quite dark. I'm not ashamed to admit that I was scared. It was then that I decided to throw in the towel. I called 911 for help.

Well, That Didn't Go As Expected

I explained my situation to the dispatcher, who quickly found my location from my phone. He transferred me to a local dispatcher and gave him all the info. This dispatcher knew the area, pinpointed the trail I was on, and told me that I was about 1,000 feet from a road. It sounds silly, but I didn't know the area, and it was dark, so I had no way of knowing that. I now understand how hikers in distress have been known to die just barely off the main trail.

I felt a bit stupid and told the dispatcher so, but he remained a calming influence on me, which, of course, is what he's trained to do. He sent a police officer to each end of the trail to help me get out. When one arrived at the end close to me, the dispatcher had the officer turn on his siren to see if I could hear it. I could, quite well, actually. The dispatcher had me walk toward the siren to find my way off the trail. I left the bike and proceeded on foot, using my phone for light and stumbling over the wet rocks in my motocross boots. The dispatcher stayed on the line with me for the entire walk, until he confirmed that I was out of the woods and with the two police officers waiting for me.

After taking my information, we talked about what to do with the bike, which was still back on the trail. Getting a ride home, then coming back for it later would be difficult for me. Eventually, we decided to all go into the woods and bring it out together. On the way, they told me some interesting stories of other times they'd been down this trail, such as when an elderly couple in a Ford Crown Victoria had driven down the same trail that defeated me and the KLR.

They let me do most of the work, but now I knew what the rocky trail looked like, and I had the help of the officers' bright flashlights to illuminate the trail better than my headlight. It was hard work, especially since I was already exhausted, but the officers were extremely patient with me, telling me to take my time and go at my own pace. I dropped the bike a third time over the rocks that had already defeated me once. I needed one of the officers to help me pick it back up again. Eventually, with their help, we got ourselves and the bike back to the road. I thanked them for their help and headed home.

I never want to repeat this experience. I'm going to be a whole lot more careful about exploring trails and unmaintained roads from now on, especially when I'm alone. Despite everything that went wrong, a few things actually went well. I knew when to call for help before I got hurt. I could've tried riding out alone, crashed, and broken something, at which point, I would have been in serious trouble. As it was, even if I had hurt myself on the way out, help was already there.

The USB charger I added to the KLR was worth its weight in gold. My phone had a full battery charge for my 911 call, and if it ran low I could simply charge it off the bike. Finally, the KLR hung in there like a champ. The only trouble it gave me was when the clutch lever began rubbing against the handguard after the last time I dropped it. A quick and dirty adjustment with an Allen wrench took care of that. Through the entire ordeal, the bike never let me down. Quite the opposite, in fact.

Huge thanks to the Mont Vernon and Lyndeborough, NH police for helping me out of this mess, as well as the dispatcher who coordinated everything. Like most motorcyclists, there are times when I've been upset to see those flashing blue lights, but I've never been more happy to see them than on this particular night.