A pair of good boots is an absolute necessity for dirt riding.

We preach the virtues of proper riding gear a lot around here. Of course, it makes sense for going fast on the road or track and making sure the pavement doesn't become a human cheese grater if you fall off your bike at high speed. That, rather than impact protection, is what riding gear is for. That changes a bit when you're on dirt, especially if you're a tentative, cautious dirt rider like me. My snail's pace means that abrasion wouldn't be a big deal if I wasn't wearing gear when I fell. In these cases, I recently earned that gear, particularly a good pair of boots, serves another important purpose: keeping your lower extremities from twisting and breaking.

Dirt Naps Are Not Fun: 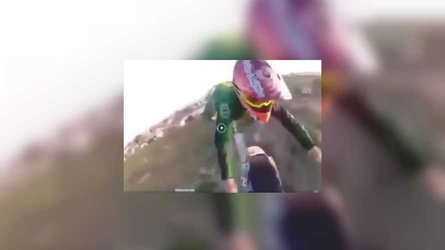 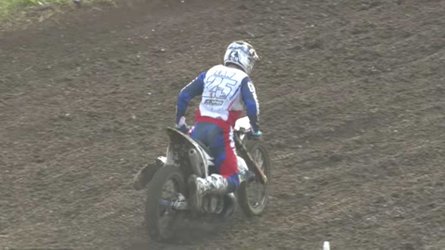 Motocross Racer Breaks Bike In Half On Landing

I was exploring one of New Hampshire's many unmaintained Class 6 dirt roads, which was more of a grassy double-track than an actual road. The grass got longer as I exited the woods into an open field, and I didn't see the deep ruts hiding underneath. I managed to get my wheels into two different ruts, which pulled the wheels out from under me, spun the bike 90 degrees, and low-sided me hard. I quickly hit the engine kill switch to avoid oil starvation, then pulled my left foot out from under the bike. My ankle was a little sore for a day or two afterward, but other than that I was unhurt. (Don't worry about my KLR 650. It's the ultimate zombie apocalypse vehicle, so of course, it wasn't hurt, either.)

A few years ago I slipped on some ice while scraping snow off my car, causing a fall and an avulsion fracture in my right ankle. I was laid up for two weeks, which isn't bad at all compared to a full break, but it still annoyed me and everyone who had to put up with me. I had no wish to repeat this experience, so when I began my dirt adventure I insisted on buying a pair of true motocross boots.

Thanks to a suggestion from one of eveRide's videos about affordable riding gear, I went with a pair of O'Neal Rider boots. By luck, Revzilla had a single demo pair of them in my size on sale, so I snagged them for just $95.99. (Regular retail is $107.99.) They looked as good as new when they arrived. They certainly don't look as new now, but I won't be returning them.

Unlike my everyday street riding boots, these motocross boots are extremely stiff, to the point where I had trouble shifting gears and braking at first. Even broken in they're still thick and stiff. The trade-off is that they provide excellent support and protection for my feet, ankles, and lower legs.

This is why I'm still walking right now. When my KLR spun and went down, my left foot got trapped and twisted under it. Even with the boot's protection, I felt it afterward. If I'd been riding my street boots, though, I likely would've suffered another avulsion fracture or even a complete break. It was the same twisting motion as when I fell on the ice, but this time I was able to stand up and walk afterward. And pick up my bike. And drag the front wheel into the same rut as the back wheel so I could actually move forward and get out of there. That experience was even more punishing than the actual fall.

The investment in solid boots hurt the bank account a little right after investing in my KLR. I don't enjoy the movement restrictions for shifting and braking, even now that they're broken in. None of that matters, because thanks to these boots not only am I still riding, I'm still walking, too.