Motocross Racer Breaks Bike In Half On Landing

Pretty sure a bike isn’t supposed to look like that!

Motocross racing is demanding both on the competitor and on the bike. The jumps, the turns, the bumps; all the elements of the dirt course have been designed to properly challenge the rider’s skills and the motorcycle’s durability. We are sometimes reminded of how hard it truly is in the failures—be it mechanical or physical—like this particular case. This isn’t something you see very often.

NOT ALL CRASHES ARE DRAMATIC 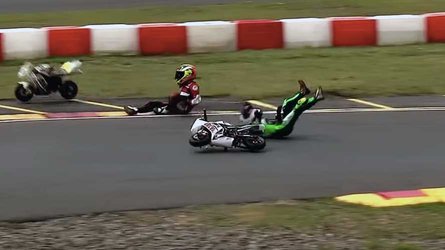 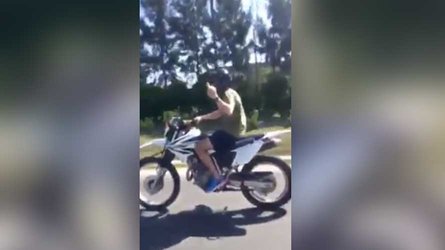 None of that strain is best represented than when one of the elements put to the test fails. During the first run of the 2019 European Motocross Championship season in Matterley Basin, UK, one of the riders demonstrated what happens when a mistake is done and a jump is misjudged.

British racer Jamie Law—or JLaw for the enthusiasts, not to be confused with Jennifer Lawrence—took a jump during the second race of the event. Miss the landing is a euphemism for what happened—the guy literally split his bike in half when the frame gave up upon landing. The bike split at the neck, jerking the rider forward. The commentator punctuated the incident with a cheeky comment about the rider being in need of “fresh berries in the morning”. Yes, berries are exactly what you think they are.

He miraculously managed to navigate his broken ride safely to the side of the track and out of his opponents’ way. He didn’t seem hurt, despite the commentator’s allusion. The bike was a borrowed KTM disguised as the competitor’s usual Apico Husqvarna.

The story doesn’t tell why JLaw was racing on a borrowed bike, but according to Dirt Bike Rider, the actual owner of the KTM didn’t take the news too badly. He even goes as far as to say that JLaw will likely go down in Matterley Basin's history with his unusual crash.