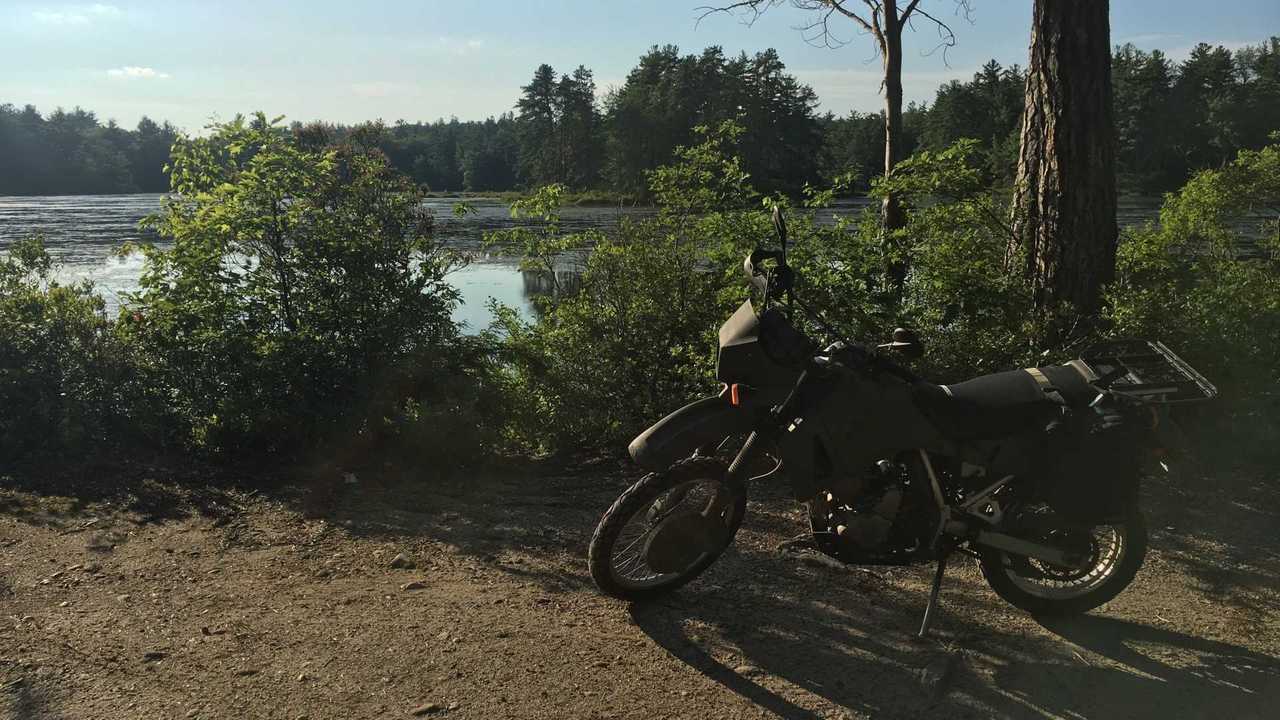 I just picked up this 2005 Kawasaki KLR 650 to dive into the dirt for the first time.

Maybe you saw this coming. I've pondered picking up a cheap Chinese dual sport. Instead of interviewing racing legend Ricky Carmichael about his accomplishments and career, I selfishly picked his brain for tips on getting started in dirt riding. Now I've put my money where my mouth is and just brought home my first dirt-capable motorcycle.

I wasn't actively looking for another bike, but like many gearheads, I regularly surf Craigslist for fun, just to see what's out there. I found an ad for this 2005 Kawasaki KLR 650. Its price was well below the averages I've been seeing in the area. Even better, it was already set up properly with skid plates, hand guards, and a Cogent Dynamics suspension. Upon request, the seller provided documentation that the "doohickey," the balancer chain adjuster lever that's the Achilles heel of KLRs, was upgraded by the original owner with a kit from Eagle Mike. Every question I asked about this bike had the right answer.

I showed the ad to Kate, RideApart's resident wrench and also a KLR owner. Everything checked out, and she confirmed that the upgraded suspension was a huge bonus. The seller seemed reasonable and honest (a rarity on Craigslist). I took a surprise two-hour ride to the middle of nowhere, New Hampshire, to see the bike for myself. It was everything the seller said it was, both the good and the little bit of bad. Even the bad wasn't really bad. A few occasional zip-ties held the plastic bodywork on here and there where the original screws had fallen out. That's just standard equipment for a KLR. The paint is cheap olive drab from a rattle can since the original red had faded quite badly in the sun. That just gives the bike a custom look and makes it look like the M1030M1, a diesel version of the KLR for the military. Cheap and easily available rattle can paint also makes it super easy to touch up if I scratch it. After a quick spin up and down his dirt driveway, I knew that I had to have it.

I hadn't planned to buy another bike. In fact, my wife and I have actively cut down our fleet in recent history, selling my Honda Shadow ACE 1100 and her pair of Suzuki Savages. Ironically, this money in the bank is precisely what enabled me to buy the KLR. Now I have to sell my Honda PC800 to put the money back in the bank, but that's OK. I no longer have time to take the long tours I originally got the PC800 to do, and there's plenty of dirt close to home waiting for me to explore it. It's a new chapter in my riding career. I'm going to have to make some changes to my riding gear to accommodate it, specifically some armored riding boots. I've been riding on the street for almost 20 years, yet here I am trying something that's brand new to me. I love the diversity of this sport.