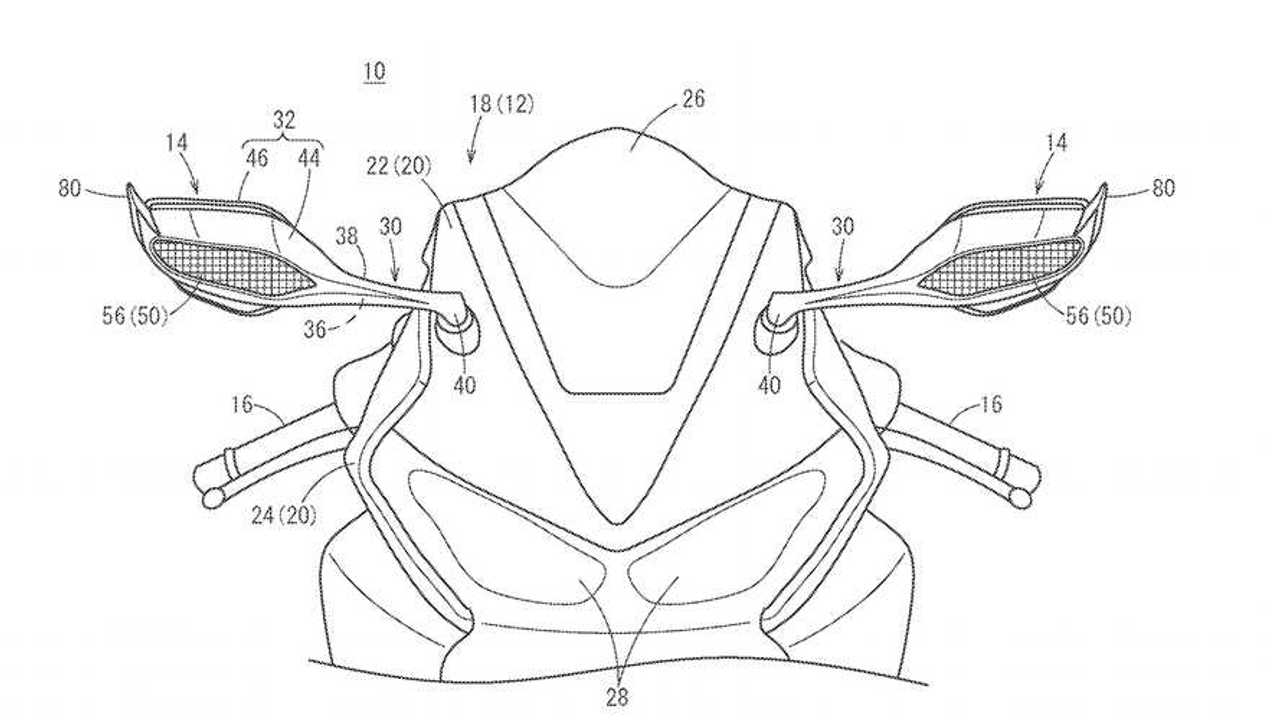 Winged mirrors? Sure, why not?

Over the last couple of years aerodynamic winglets have increasingly become a focal point in the world of elite two-wheeled racing. Though we first started seeing modern winglets almost a decade ago, it wasn’t until a 2018 World Superbike ruling—allowing the down-force generating pieces in competition so long as they appear on the homologated bikes—that they’re just now starting to become staple features on cutting edge superbikes. Ducati’s Panigale V4 R and Aprilia’s RSV4 1100 Factory both sport winglets, and according to a recently-filed patent, Honda’s flagship superbike is slated to possibly be the next production model to join the winglet party.

Unlike the MotoGP-derived winglets that attach to the outside of the front fairing, Honda’s new design sees the aerodynamic pieces integrated into the outer-edges of the mirrors. Think of them more as supplementary aerodynamic bits, not primary ones (more sizzle than steak). Kawasaki’s H2R sports a pair of blades with a similar winglet design, positioned where the track-only bike’s mirrors would otherwise be located. In the new patent, however, we see Big Red implement this aerodynamic advantage into the bike’s mirrors themselves.

While this looks pretty trick, I personally have some major qualms about how capable, even the sturdiest of mirror stems, will be of transferring down force at speed, as the parts are far from structural/weight-bearing components. For reference, the Panigale V4 R’s body winglets generate a claimed 66 lb of down force at 167mph (or 30kgs at 270kph).

Though the recent patent filed by Honda Motor Corp depicts the sleek mirrors—which include turn signals housed in the backs — on its latest full-faired flagship, it’s extremely unlikely the current generation CBR1KRR will be the final recipient of said mirrors, (and that’s if they see production at all). Back in October our colleagues over at Young Machine released an article stating Honda planned on unleashing a fully-updated CBR1000RR in 2020, and though this is a mere rumor, there’re a number of reasons why it holds weight. First-off 2020 happens to be when the new Euro5 regulations take effect, so Honda is forced to make some substantial changes to its flagship liter bike if it plans on keeping it in the lineup.

In early January, the Japanese firm also filed a patent for a new variable valve timing system—not unlike BMW’s "ShiftCam" system—that many theorize will appear on a CBR model, likely the 1000RR. Next, and I’d argue most importantly, the 1kRR is objectively pretty damn long in the tooth compared to the competitors’ latest superbikes. The thing’s in dire need of a major overhaul if Honda wants it to be genuinely competitive.

While all of that points to a new CBR1000RR for 2020, there is also a slight chance that Honda may be toying with ways to integrate down-force-generating bodywork—which is admittedly all the rage these days—into its popular naked lineup. After all, MV Agusta was able to do just that with its latest Brutale. And the mirrors could definitely be one potential way to implement winglet-style pieces into a naked.

Though it’s all speculation for now, at least Honda appears to be working on a bike powerful enough to justify mirror winglets, and that’s not a bad thing.