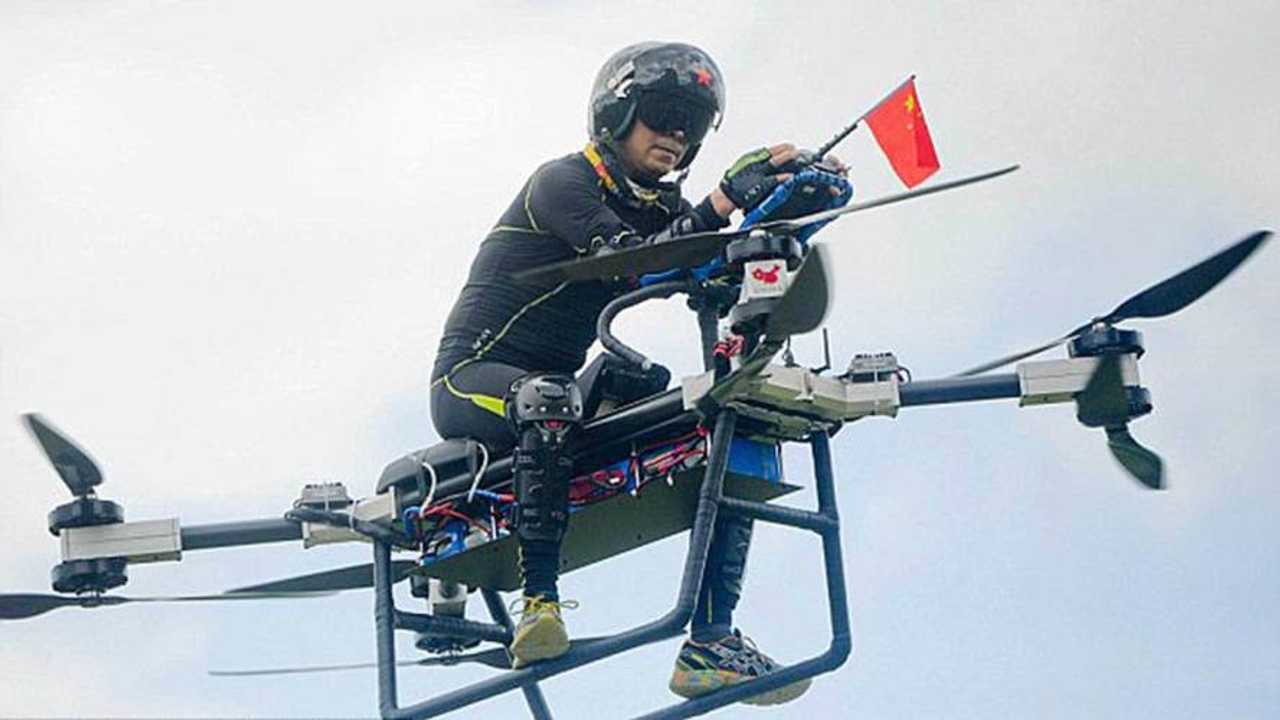 What do you get when you cross a Chinese guy, a big dream, and an over-sized, rideable drone? Something awesome, that's what.

“It’s a cloud!  It’s a drone!!  It’s….a ‘flying motorbike’!!!” Chinese inventor brings dream to life when he takes to the skies

The image is striking: a man, dressed all in black—helmet, athletic tights, motocross gear and gloves—floats through the air on an overgrown drone. This is exactly what an assembled crowd of media and curious onlookers beheld on Monday, July 28, in Tangxia town, Dongguan city in South China's Guangdong province, when 40-year-old Zhao Deli successfully flew his new rideable drone 26 feet into the air.

CHECK OUT: Hoverbike Looks Like a Death Trap, Still Awesome

The drone—named 'Jin Dou Yun' or 'Magical Cloud' in honour of the mythical Chinese superhero Monkey King’s ‘Somersault Cloud’—is likely a little heavier than its namesake, but it's still remarkably light. Included in the 564 pound maximum weight for take-off is the top load weight of 220 lbs.

For now, the moto-drone’s top speed is 44 miles per hour. It can reach an altitude of 9,800 feet, and the battery has a flight-life of 30 mins. The console, attached to the front of the light-weight frame, uses thumb controls, and each of the four rotors—double sets of propellers—are attached to the frame which receive power evenly from a motor attached to the frame right below a motorcycle-style seat. The rider’s feet rest on the bottom half of the frame.

Zhao is not a formally trained engineer, mind you. He started reading up on drone technology when they first appeared, and was compelled to follow his childhood passion when he read about a Canadian who had created a hovering surfboard. However, dreams don’t come cheap. The inventor left his job two years ago, sold his house, and turned to friends for loans in order to fund the $145,000 USD project. His testing field in Guangdong province is littered with evidence of earlier trials, pieces of machinery and bits of broken propeller blades litter the ground.

None of this mattered during this latest successful test, though.

“It was like riding a motorbike in the sky,” a thrilled Zhao told a reporter from Guangshou Daily. “My dream has come true after this 1560th flight test. It’s awesome, right?”