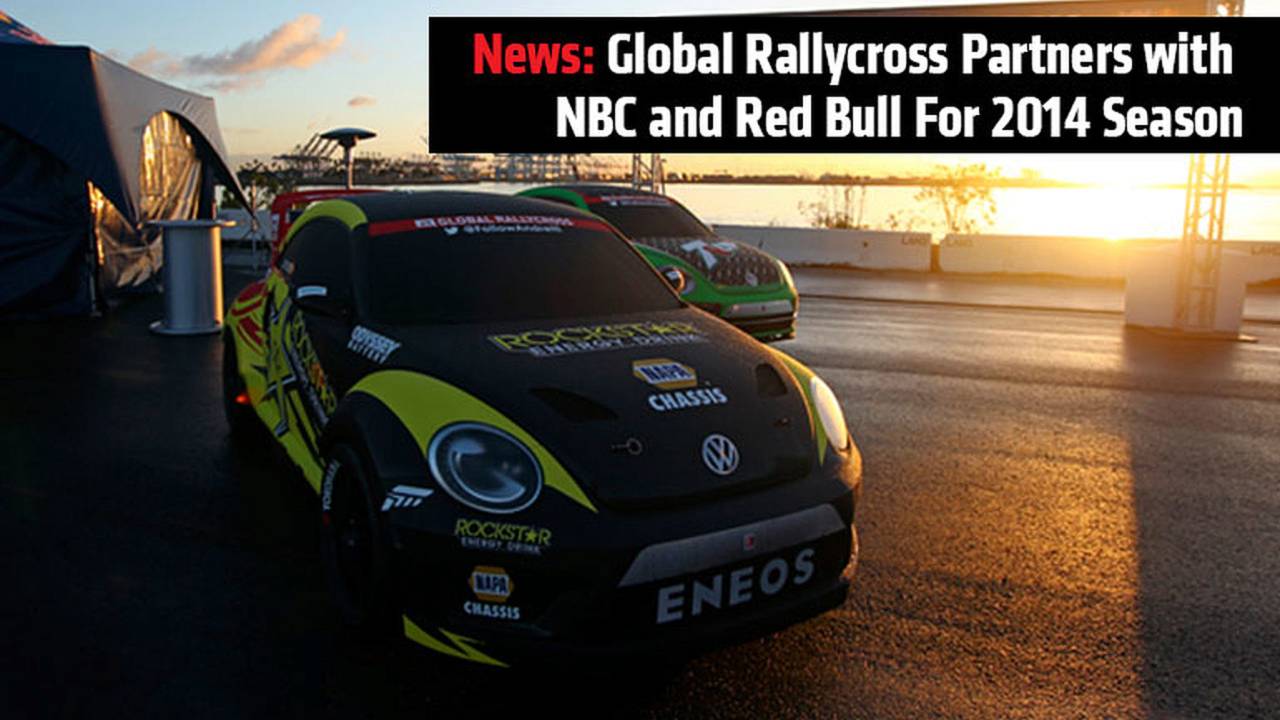 Global Rallycross has linked up with NBC, Red Bull and even Volkswagen as the fourth season gets ready to kick off May 17 in Barbados.

On a sunny brisk day at the Port of Los Angeles in San Pedro, California, the announcement that NBC and Red Bull will be partnering with the Global Rallycross (GRC) for the 2014 season was officially made. The GRC will begin its fourth season May 17-18, 2014, in Barbados. Volkswagen has also decided to join the new season, adding an expanded variety of cars to a line-up that includes Ford, Hyundai, Subaru, and Chevy. The GRC aims to expand its popularity, gaining even greater traction with its audience as it features 10 races, including the X Games in Austin on June 7th, airing on ESPN.

NBC, recently inked as the official channel of the GRC, plans to broadcast nine out of the 10 upcoming GRC races in 2014. Replays will air on NBCSN, while mobile devices will allow audiences to watch the races wherever they go. “This is really going to help expose the sport,” said GRC CEO Colin Dyne. “It’s going to be in millions of households, with high-quality TV production; we really feel it will springboard the sport into a new era.”

Red Bull’s recent partnership with the GRC makes it the official strategic partner for the series. “We can take this thing to the next level with Red Bull as the title-sponsor, they’re marketing geniuses,” said Gary Quinn, Vice President, Programming and Owned Properties, NBC Sports Group. Speaking on the partnership between the GRC and Red Bull, “I take it very seriously. I’m looking forward to over delivering on multiple platforms to take GRC to the next level,” said Quinn.

Rally racing, which has existed in Europe with massive appeal for decades, has the potential for sustained success in the states. It attracts a younger generation, which is good for the future of the sport. Famous U.S. rallycross drivers, such as Brian Deegan, Scott Speed, and Bucky Lasck have become household names throughout the states.

“I’d like to think GRC is going to be around for a while,” said Brian Deegan (Ford). “I’ve invested many years; I’ve been around since 2009 at the X Games. It’s got so many good characters and names in racing, hopefully this thing grows.”

The GRC began in 2009 at the X Games and has gained a popular following among millenials, the upcoming generation that is currently 18 - 35 years old. The GRC is a motorsport competition that features dirt, cement, jumps, water, and high-speed thrill action. The drivers are professionals that come from a long list of expertise ranging from Formula One racing to professional skateboard competition.

However, miscellaneous reasons keep new drivers and teams from joining the GRC. Gaining sponsorships and acquiring start-up money can be difficult, “the toughest thing is the expense of the cars,” Deegan said. “I run my own race team that operates at seven-figures a year, and rallycross is close to that same price.”

The Supercars are compact, turbocharged four-bangers that crank out 600 hp+. These vehicles are all-wheel drive and reach 60 mph in 1.9 seconds. The cars must also have the suspension that can withstand 70-foot jumps. Each driver lines-up at the starting line, and then it’s a sprint to the finish with one mandatory “joker lap.” This special lap truly changes the traditional rallycross into a much more extreme sport. The lap shortens the course, but adds a challenging obstacle such as a jump or water.

“The joker lap is something we can use during the race,” said Scott Speed (Volkswagen). “The races are generally short, and it’s an area that can provide some sort of strategy. We can take it early or we can take it late depending on what happens on the first lap. It’s a variable we can use to our advantage.”

For the past 3 years, the GRC championship series has traveled the U.S. for 10 races, while also visiting at least one foreign country. Each track changes from city to city; no two tracks are the same. The tracks are transportable, easily constructed, and torn down within a week. With a variety of variables change between tracks, it’s not the cars that make for a good race, but the drivers.

“What makes a good GRC driver is someone who has good car control, is very race aware, and has etiquette,” said Bucky Lasck (Subaru). “What makes a horrible GRC driver is someone who can drive, but has no awareness. They lack patience when think they have a spot. They get-up on your real wheel, but they don’t really have it and they don’t really back off to give it back, instead they just stick there.”

It’s the tight wheel-to-wheel duels that make the GRC so popular among a generation who’s played racing video games their entire lives. Games like Need for Speed and car movies, such as the Fast and Furious, lend themselves to intense, action packed racing scenarios. The GRC delivers just that. “It’s definitely not a fad,” said Lasck, who’s been skateboarding professionally since the early-90s. “I seriously and honestly think it’s the best racing. It’s got the most aggressive, visualized eye candy: the cars, power, flying, and dirt, it’s the best well-rounded racing sport. It’s a mutant of everything.”

Also convinced the GRC is not a fad, many new partners have joined the mix. Andretti Autosport, Barracuda Racing, GO PUCK, United States Auto Club (USAC), and GoPro have all joined as partners for 2014. Also joining the mix is Yokohama Tire, which plans to supply each car with fresh tread. “We are thrilled to welcome back many of our seasoned partners as well as open the door to those who are new to our series,” said Dyne. “I think everybody believes in the vision.” With the national spotlight being cast on the series by NBC, a potentially bright future may lay ahead for the Red Bull Global Rallycross.