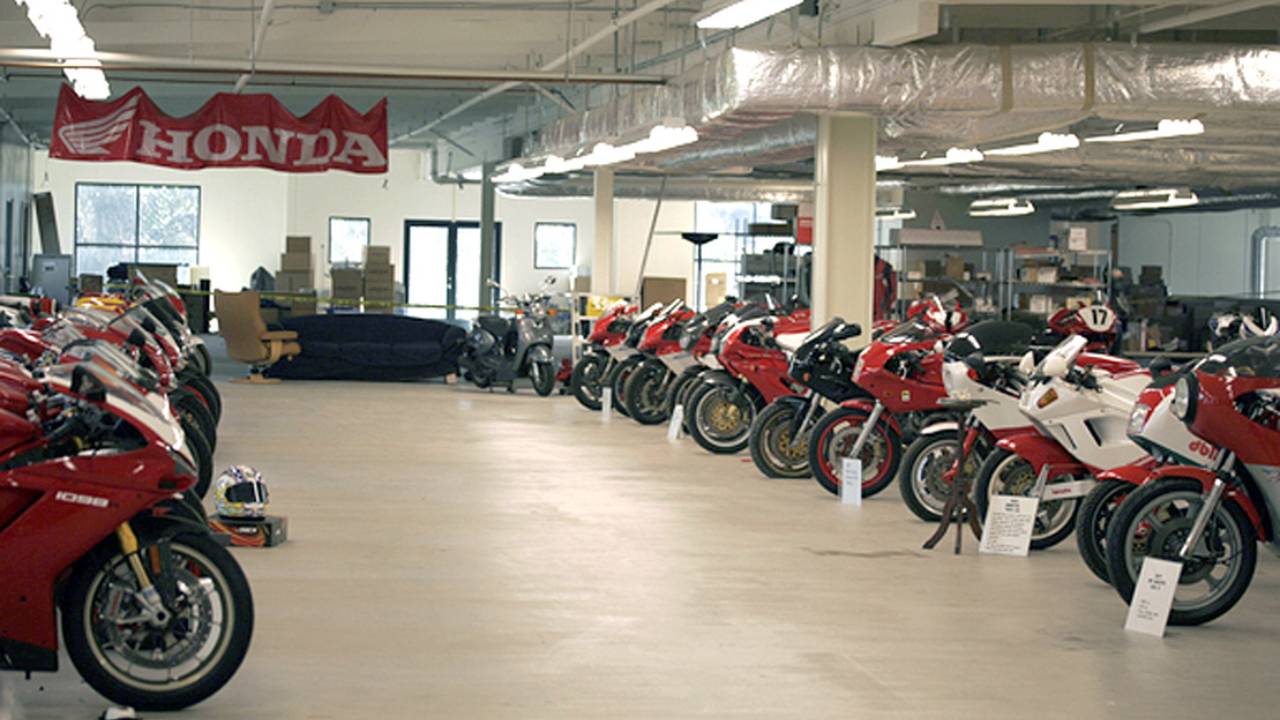 Hidden away on the second floor of an unassuming business in Camarillo, California, is one of Southern California's best motorcycle museums.

The motorcycle community in Southern California is a small world. Everyone rides Angeles Crest and Malibu, we buy parts from the same shops, and we know all the guys that have a lot of really cool bikes. Or, at least I thought I did.

Then my dad, who's never owned a motorcycle in his life, called me up convinced there was a friend of a friend with a collection I needed to see. He tells me that the guy who owns these bikes has a son who was a racer, that a lot of the bikes are race bikes and, most importantly, that he's not a pirate. I wasn't expecting much, but I brought my camera anyway.

Almost immediately, I knew the camera was a good idea. Officially known as the Schoenewald Collection and The Lehmann Motorcycle Foundation, Daniel Schoenewald's near 100 bikes are stored and displayed in the upper level of his Camarillo business. A bronze sculpture of Rollie Free was the first hint that we were in the presence of a man who loves motorcycles. A quick peek into Daniel's office revealed more: signed tail-sections from race bikes mounted on the walls, photos and helmets. We took an elevator upstairs, and even though my dad insisted "he's gotta have at least 100 bikes in there" on the drive out, I wasn't prepared for what I was about to see.

As we step out of the elevator there's a Triumph triple, the wild looking X75, a Metisse, and a row of Ducati's as far as I can see. Only the MH900E wasn't a true sportsbike, but even then, it was built to honor Mike Hailwood, a racer. To the right are the British bikes, Bimotas and MV Agustas. Back when I aspired to own a super cool period correct cafe racer, I thought the John Player Special was probably the coolest bike ever built. Until seeing it in person, I'd never realized just how bug-like and excited it looked.

I walked between the two rows of Italian machines, and tried my best to keep from drooling. I stopped at the Tesi 1D to explain to my dad why it is a special bike. While describing how its front suspension functions, Daniel told me to hop on, grab the brake and bounce it. That's right, a collector who treats his motorcycles like, well, motorcycles. Daniel went on to explain how Bimota got their name (BIanchi, MOrri and TAmburini) and why this particular Tesi is special (it's number 7 out of 127, the first six of which were destroyed in testing). He also displayed a copy of the Cycle magazine issue that featured this exact bike on the cover.

The Tesi ready for its close up.

We continued around the entire mezzanine looking at bikes, talking, and playing with stuff. Daniel and his friends ride almost all of the bikes—though perhaps not the Brough Superior or the Von Dutch speedway bike—there's a reason he's calling it a collection and not a museum. His Desmosedici has almost 6000 miles on it and was out being ridden by a friend when I visited.

Daniel's motorcycles can be divided and categorized in a number of different ways, but the simplest is to split it up into two categories: Bikes that were built for speed (Ducatis, Bimotas and Nortons) and bikes that are just too cool too pass up (Steve McQueen's Indian Scout or the Swiss military Condor that Von Dutch used to ride around on).

The JAP powered speedway bike ridden by Von Dutch has a funny looking spool sticking out of the frame between the seat and tank on the right side. Not being a huge speedway fan, I had no idea what this mysterious addition was for. Daniel told me that, way back when, racers used to wear a bracket strapped to their right leg that fit over the spool. Think of it like stomp grip, just a little more aggressive. They were eventually outlawed because racers kept breaking femurs.

We eventually made our way to Rich Oliver's TZ250. In the 2003 AMA 250 season, Rich led every lap of every race on this bike. Rather than trying to explain just how light a TZ250 is, Daniel instructed me to grab the left clip-on while he grabbed the right. On his count, we pulled on the bars and the front wheel rose into the air with what seemed like no force at all. We set it down and after walking around for a few minutes looking at it, I hopped on to see what a proper 250 feels like. Amazing.

The next thing that caught my eye was a rainbow of Kawasaki triples. It's rare to see a properly restored or well-maintained H1 or H2. Even more rare is an entire row of them parked side-by-side. If you look closely, you'll notice that the blue H2 isn't quite right: it's got an extra pipe connected to an extra cylinder. That adds up to 4 cylinders and 1000cc of two stroke power. Allen Millyard (builder of the ride-able viper V10 and v12 Kawasaki powered bikes) built the beast using two left and two right cylinders, a custom crank, two sets of cases, and more than a little machining. He wisely added dual disk brakes and a steering damper.

The MV Agusta complete with autograph

As we walked past a row of Nortons, the conversation turned toward the MV Agusta 750 Sport that Daniel bought from Yoshi of Garage Company.  The bike is strikingly beautiful. Still, it isn't parked behind a velvet rope. He decided that it was a good time to start it up during our little tour, clear the old gas out of the carbs and let the battery charge for a minute. There's no chokes, so he asked me to put my hand over the left two venturis while he thumbed the starter. After a few seconds of fiddling with the carbs, it fired.

Look at all those Kawasakis

While the bike warmed up, we took turns telling my dad the story of the Castiglioni's, MV Agusta and Harley Davidson. It takes a long time to warm up. I finished the story while Daniel finally answered one of the phone calls he'd been ignoring. Three and a half hours had passed since he took us upstairs and his wife wanted him to come home and eat dinner.

Other highlights you'll see in the gallery include a 1930 Brough Superior, a Ducati 750 F1, more Nortons than you can handle, and a Vincent Black Lightning.