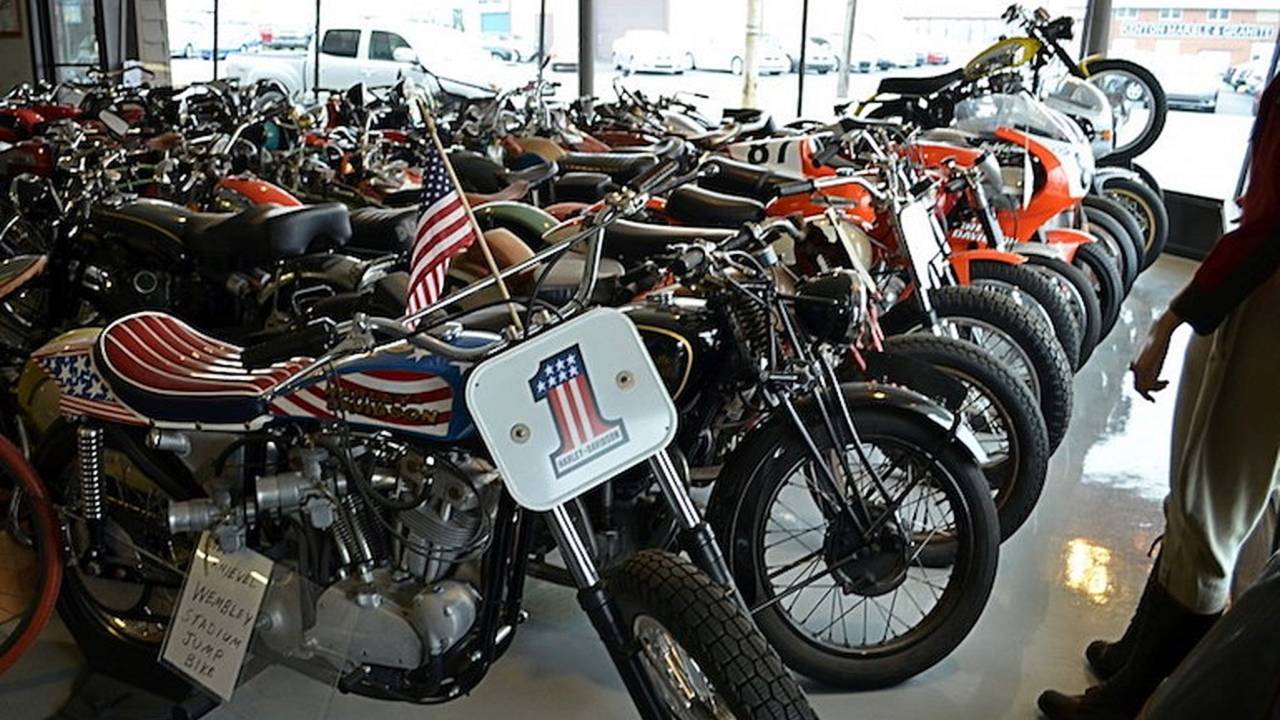 Hidden in a nondescript Ohio car lot, is a world-class collection of motorcycles from every class and era

There are a number of amazing motorcycle collections that are well known to the motorcycling population like the Barber Vintage Motorsports Museum or the Petersen Automotive Museum. But for every famous collection, there appear to be lesser known stables of an equally prestigious caliber. One little-known assemblage of two-wheelers can be found inside a nondescript building on an Ohio used car lot, and while you may have never heard of Brim’s Imports, its throng of elite motorcycles is nothing short of world-class.

The Brim collection includes a vast array of precious, antique American machinery (photo by Adventures of Jessie and Eric)

Kenton, Ohio, is a small city in West-Central Ohio named for the famous frontiersman and explorer Simon Kenton. It boasts a population of less than 10,000 residents, but the town hides one particularly noteworthy attraction and it isn’t the Hardin County Historical Museum. Brim’s Imports is a massive auto lot littered with a number of buildings and spanning for over a mile. Brim’s isn’t just, well, brimming with endless rows of cars however, the personal motorcycle collection of the company owner Tom Brim can be found in a trio of structures running along Kenton’s West Franklin Street.

Brim’s collection is an eclectic smorgasbord of vintage scoots in conditions ranging from showroom clean to craigslist basket-case. While there's a bit of everything, classic Italian, Japanese, British, and American machines claim the majority of the collection’s real estate. Brim’s examples include everything from antique board track racers to military mounts to retro road racers. There are even a handful of rare scooters and other strange two-wheelers. It’s hard to even begin to guesstimate the value of Brim’s collection—a fact only further complicated by the fact the collection includes a significant number of prestigious cars. Even conservative estimates put the collection's cash-value at a cool seven or eight figures.

Brim's collection even includes a mobile museum housing a 1917 Indian 8-valve boardtracker, a 1907 Indian tri-car, and a Jefferson single. (photo by Brim's Imports)

With the sheer number of elite examples housed in the Brim collection, it can be easy to overlook how truly noteworthy so many of these bikes are. There's the 1917 Indian Eight-Valve Board Track Racer, the 1950 Vincent Rapide, the Norton John Player Commando, the 1942 Harley-Davidson XA (powered by a BMW-style boxer engine), and even a rebuilt XR750 that, according to Brim, was supposedly the machine Evel Knievel used during his 1975 crash at Wembley.

Supposedly one of Evel Knievel's XR750, though its origin is questionable

If you’re ever passing through Ohio and have a chance to stop in and check out Brim’s Imports’ collection of vehicles I highly recommend it. Luckily for us less nomadic individuals, Brim is currently working on setting up a website for its bonkers collection of scoots which should be up and running in the relatively near future.

The boxer-powered Harley XA, because as they say...Imitation is the sincerest form of flattery (photo by the Adventures of Jessie and Eric)