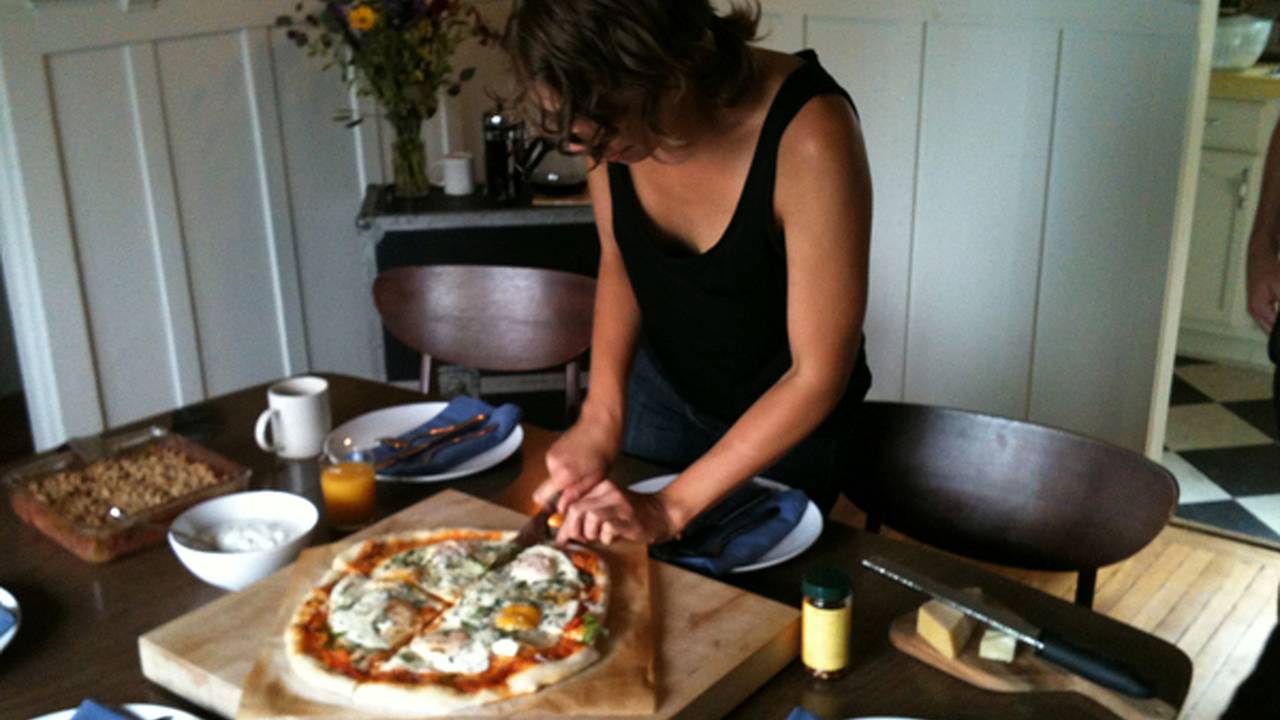 A trip for the ages.

I'm not religious, but once a year I make a pilgrimage. The point of the trip isn't to watch a 40-minute race on Sunday, but instead to go on an awesome motorcycle adventure with like-minded friends. I try my best to wear out a set of tires and pucks on the way too. We avoid the freeways and instead ride all the tiny back-roads that are normally too far away. This is the story of our 2011 Laguna Seca trip, motorcycle culture at the track and the amazing ride there and back.

The trip began at 7:30 in my garage. I'd packed the Guzzi the night before and now it was time to head down to Rogelio's place to see about fitting his sport classic with soft saddle bags. They didn't fit, but it was no big deal. I tossed his backpack in the Stelvio's top case and off we went to Bobby's for breakfast. Lawbreaker was waiting for us there and Bobby's lady friend had already prepared a breakfast pizza, plum crumble with yogurt, coffee and orange juice. What did you expect from four guys riding air-cooled Italian v-twins from Los Angeles to Monterrey?

After a quick stop for gas, we hit the 101 and 23 for a while until I motion for everyone to go left and follow me down a shortcut that takes us away from radar equipped CHPs on the 126. Highway 150 is next and this is when things start to get fun. Watch out or you'll be caught out by one of the many downhill decreasing radius corners here. 150 takes us into Ojai where we stop to gas up.

Highway 33 is a special road. Good sight-lines everywhere, fast stuff, slow stuff, good places to stop and shoot photos, water, a pistachio farm that also sells gas and ice cream and an incredibly long straight at the end. Theoretically, if you were able to get a bike moving at 150mph or faster on this public road, there is a bump that would send you flying through the air like an Isle of Man racer.

Things only get better from here. The next fun road after Taft (which is kind of a shit-hole) is 58. If you're sad because you're bike isn't 150mph fast, then now is your chance. 58 is one of those magical roads that's fun on nearly anything. To give you an idea, here's a video of me riding it last year. Please excuse the poor lines and BP, it was my first time.What you don't see in the video is the roller coaster that comes after the tight stuff. Come over the top of those hills over 100 and you'll lift off. Take it easy until you get the hang of it. Another hidden danger on 58 are the 15mph turns. You don't see them until you're right on top of them and they really mean 15mph. Watch out for the signs and slow accordingly. 58 will drop you back into the hills and you have a choice of taking the fun ride on 58 to the 101 or going up La Panza road to Paso Robles. We went to Paso and ate lunch at a BBQ place.

Here's where things get boring. After lunch, we hopped on the 101 for 57 miles to Central road. The 101 is boring, straight and patrolled by aircraft and Crown Victorias hiding behind bushes, up on-ramps, in the median and everywhere else you can stuff a car. We made it through the gauntlet unscathed and turned left onto Central. After some confusion over fuel economy and small tanks on Ducatis, we went west down G16.

I first encountered G16 last year when we decided that PCH was likely to be boring and crowded. It's been my favorite road ever since. Unfortunately, it's more than 300 miles from my home in LA. The second time around, I was riding at dusk and with lots of traffic. It was still fun, but I'm not sure I'd do it again. The setting sun made for lots of bright golden light and extremely dark shadows. Shadows large enough to hide an Escalade or Prius. People always tell stories of almost getting run off the road. The Escalade and Prius actually ran me off the road. Same scenario both times: Driver uses the whole road through one of the narrow single lane sections. If there was a centerline, they'd have been way over it. The Prius driver actually put his inside tires in the dirt. I made it through each incident alright, but wished I'd had my lighter, nimbler, faster, stickier tired GSX-R.

After 38.8 miles of light-blue hybrid synergy drive powered death waiting around every blind corner, we arrive at the Running Iron in Carmel Valley Village.

There are no street lights at night and shortly after the sun sets, a thick layer of fog covers everything higher than a few hundred feet above sea level. It burns off by noon and things warm up. The hippie coffee shop sells delicious cinnamon buns that aren't raised or frosted. The cappuccinos aren't bad either. At night you have your choice of delicious Thai food or a neat small-town bar. I ran into some friendly VW Transporter driving locals rolling a joint from their own home-grown plants. People wave and say hello when you walk down the street. Carmel Valley Village is not a bad place.

But that's not why we come here (ok, maybe that's why Ashlee came). Take G20 up and over the hill and turn left when it dead-ends into highway 68 and you find yourself at Laguna Seca, or Mazda Laguna Seca Raceway if you want to call it by it's proper name. Watching a MotoGP race on television is fun, but seeing the real deal in person, with all the sound, fans and industry people to go along with it is completely different. MotoGP is much more than a 40 minute, 26 lap race. It's walking around Ducati Island, meeting the guys from Motus, talking to all the gear and motorcycle manufacturers, seeing wild race machines in person and watching riders constantly trying to find a better setup and drop their lap times. MotoGP weekend at Laguna is special. There are a lot of people doing things here.

The crowd is fun too. Grizzled old bikers in questionable half helmets, Ducatisti dressed in head-to-toe Puma/Ducati branded clothes, boring old BMW riders in day-glo Roadcrafters, club guys in leather vests, Gixxer bros, hipsters on Cafe Racers, normal people and even a girl on a Playboy branded R6 are all there. You can expect to see a scantily clad model every 20 feet or so, less if you're on Ducati Island. If you're cool enough and know the right people, you may even be invited up to the Red Bull Energy Center.

This being my first year at Laguna as part of the industry, I realized how much I'd been missing. Before now, I'd always just bought the cheapest passes that would get me into the pits. Amaryllis from Falcon Motorcycles was kind enough to finagle two extra passes for Ashlee and I to hang out at the Red Bull Energy Center though and it forever changed my ideas about racing.

Before the race, everyone just hangs out under the canopy on top of the building, enjoying the open bar and DJ. As the riders pull onto the grid, things get serious. People sit down or walk to the balcony to watch the race start. There are a lot of tense conversations about betting and anyone that owns a camera or iPhone has it out and ready to shoot. The place is probably 100 feet higher than the track at turn one and you've got a clear view of the last turn, front straight, and turns 1-5. When the bikes disappear to the backside of the hill, you just watch the live feed on the TVs.

The sound of the bikes coming out of turn eleven and running wide open down the front straight through turn one and into the braking zone for turn two is amazing. My GSX-R makes a pretty serious noise when I wring it's neck, but real GP bikes sound like nothing else. The whole experience of watching the race from up there is really more like that of watching pod racers do battle in Star Wars episode one.

The colors are the same, the sound is identical (toss in a couple e-bikes and you'd have tie-fighters too), and the landscape is eerily similar. Drunken high-stakes illegal betting, scantily clad models walking around, open bars and a DJ I'd be happy paying $60 to see add quite a bit to the show. I almost expect to see Jaba the Hutt slither out of the elevator with alien hangers-on in tow. Boba Fett could easily land on the heli-pad post-race to collect debts.

After the races on Sunday, I ended up at the Red Bull after party at a bar on Cannery Row. Lorenzo and Spies were present and Rossi supposedly made a 3 second appearance before taking off to go do whatever he does. You might expect the party to be absolutely insane, but it was really just a bunch of motorcycle people hanging out at a bar with a decent dj.

The next morning was supposed to be an early start, but Bobby, Lawbreaker and Rogelio over-slept. Having gotten back to our place around 2am, I was in no hurry to wake them up. Once up and showered, we hit the coffee shop, packed our stuff and noted how much better G16 is with mid-morning light and a lot less traffic. We went down Central and hopped on the 101, but only for a minute. We got off at G14, stopped for gas and Rogelio led through a series of wrong turns after that.

After stopping to ask directions, we headed in the direction of a secret winery that Bobby knew of. Just like Carmel Valley Village, this is a rough part of town.

Our trip to the winery was short lived as they weren't serving food. Oh well, at least I got to shoot some awesome photos. Plan b was a deli on highway 46 just a few miles down the road. Farm Stand 46 serves $10 sandwiches that are actually worth the price and sells neat culinary things like Lavender salt and dark chocolate spread with candied orange peels. Bobby and I stocked up on neat stuff for our ladies before getting on the bikes and hitting the 101 to make up for lost time.

The 101 was uneventful except for a close call with a white crown vic and a flat tire on Lawbreaker's Monster. I got home just after sunset, glanced at the trip meter on the Guzzi that read a hair over 900 and noted that the rear tire now resembled a spent slick. After peeling my gear off, I crawled into bed and slept like a rock. Motorcycle adventure: completed. I had an amazing trip and I probably will next year too.