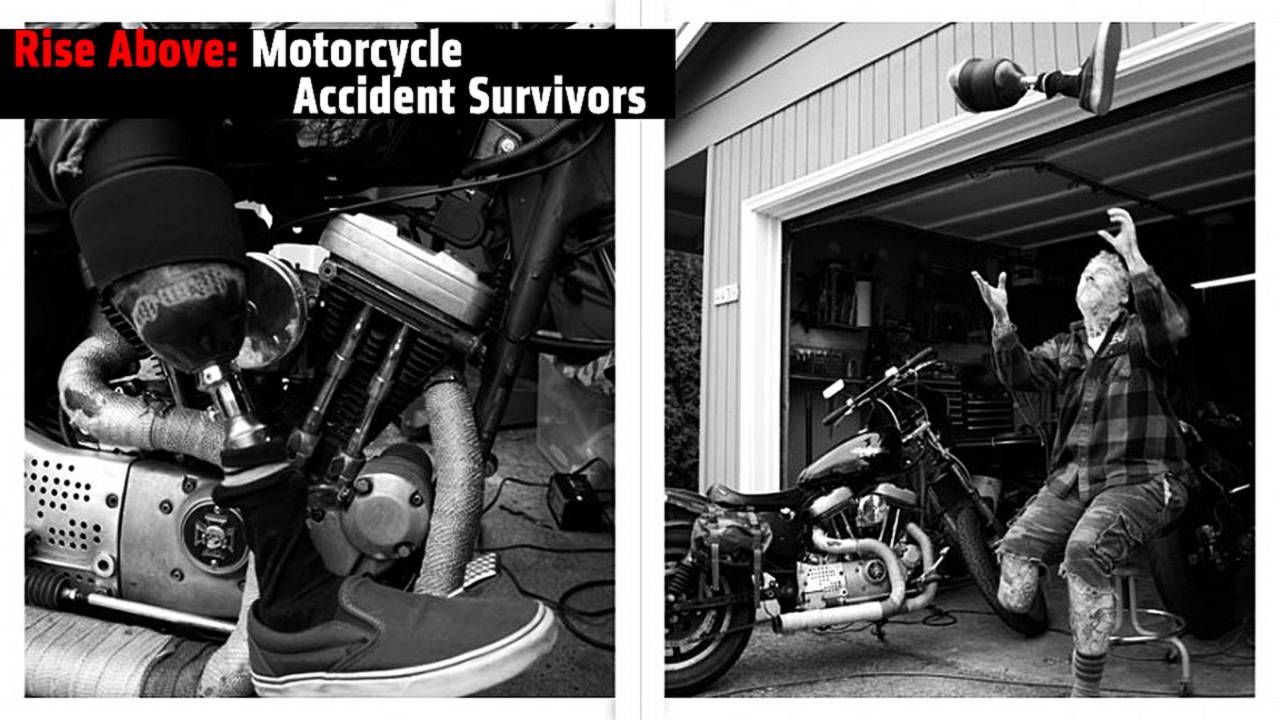 Motorcycles are cool. If you've navigated around RideApart then you probably would agree. From images of outlaws in Hollister to Steve McQueen jumping fences or Evel Knievel jumping buses at a state fair. Motorcycles and risk go hand in hand. How advertising and entertainment portray this ever-changing lifestyle overshadows the realities and responsibilities of our lifestyle.

Recently I stumbled upon a clothing company ad showcasing twenty-somethings cruising proudly with their feet on the handlebars and girlfriend clutching on with bare skin legs peering out of shorts that even Daisy Duke would shy from. It makes perfect sense when staring at the asphalt going 60mph, right?

Does it sell clothing? Probably. But what else is it selling to our subconscious? These are just some of the ingredients for photographer David Frost in his latest curated collection, “Rise Above," an intimate capture of motorcycle accident survivors and their bikes.

With the confidence of a seasoned photographer and a multiple-crash survivor himself, Frost takes a deep look into the courage of passionate riders who, through some hair-raising and downright death-defying accidents, continue to get out and ride.

“I find it irresponsible when seeing the glorification of careless riding in ads lately,” says Frost. Photo series and video shoots are hitting the Internet daily not only companies, but our peers, reiterating the same message. This masks the underlying words we dare speak of… crashing.

“We’ve all done dumb things in our lives, sometimes on bikes, but using those dumb moments just to sell an image and product to youth is where the problem lies.” Frost isn’t some curmudgeon blasting the acts of youths, but rather, a carefree and contagious spirit. David Frost’s goals as a photographer as well a rider are quite similar: To be represented by work that represents him personally.

Rise Above, while presenting graphic horror stories, brings out the truths of motorcycle safety and the realities that can happen while traveling at high speeds without proper gear. It also highlights the enduring devotion of the survivors of the sport. Needless to say, when they got back on their mounts, they paid close attention to being properly protected. Each photo set showcases one individual who has had a traumatic accident and how they’re courageously moving past.

“It’s not a matter of IF you go down, it’s a matter of WHEN,” says Richard Jones who lost his leg after being struck by a pickup truck which pinned him under the truck’s front winch. When asked about being one of Frost’s subjects, Jones was nothing but positive. “If you know me, I’m not really even comfortable wearing shorts as I get used to the look of my prosthetic, but being a part of this cause as well as the collection seemed to take the self-consciousness away.” Jones is still finding ways to ride with newly fitted forward controls on his Harley.

While interviewing the subjects for this collection, I started realizing this inner strength ran through the blood of not just Jones. Amanda Sundvor was thrown from the back of a friend’s bike and suffered life-threatening injuries. When having her hand and knuckles fused she brought a motorcycle grip into the hospital, to ensure that her throttle hand would forever be in position to ride. She too professes the common threaded motto, “There are two types of motorcyclists: ones that have laid it down and ones that are about to.” Sundvor’s spirit was electric, even through the phone.

The idea is not to dissuade people from enjoying motorcycles, but rather showcase the realities in order to help educate riders of the unavoidable risks. The idea is to not consciously showcase risky behavior to peers and readers, like we've been so exposed to in popular culture.

The first installment of Frost’s limited run of signed prints is now available on The Moto Attic with 25% of proceeds benefiting the Motorcycle Travel America Foundation which helps fallen riders and their families after an accident.

To see the full Rise Above photo series: www.themotoattic.com/rise_above