The Bikes of Heavy Rebel 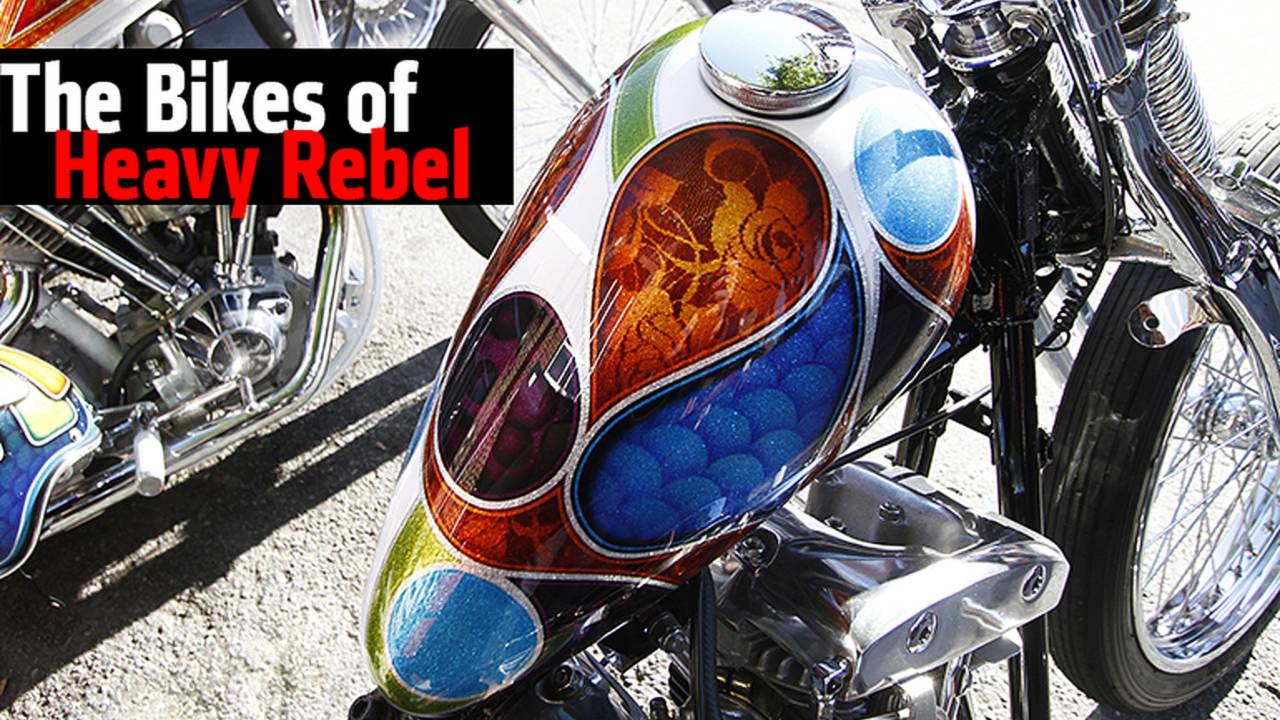 The 14th annual Heavy Rebel Weekender, is a weekend long party in downtown Winston-Salem, North Carolina. Held over July 4th weekend, it's a rock and roll show filled with a ridiculous amount of bands in several different basement rooms and throughout the main hall, all weekend long. From guys playing on cardboard boxes to burlesque shows to band members hanging off of cellos.

We aren't big on the music scene, but we've loved the car and motorcycle show since its inception. Held on the Saturday morning of the event, there are strict rules for no trailer queens, muscle cars, or anything newer than 1972. We saw rat rods, bikes, rock-a-billies, mud wrestling, and tricycle races on Saturday. Operated by car club Road Devils, who volunteer giving awards like best of show and farthest traveled.

Having just landed in North Carolina the night before, we arrived at Billy and Kasey Revis' shop, Motorsport Connections that specializes in BMW race cars, that morning to cruise to the show with four other cars. Billy let us take his dune buggy, complete with a surf board and open exhaust. It's an unrestored, original bass-boat aluminum metal flake buggy and the closest thing to a motorcycle we could have asked for.

The show fills up Trade Street in downtown and this year added Liberty street to accompany more entries. All total, there were roughly 300 cars and three times as many spectators. There was also mud wrestling and tricycle racing, but we were there to check out the custom bikes.

Butcher Chop of Danville, Virginia, attended with almost 30 bikes. Mostly made up of hard tail Sportsters, Ironheads and Shovelheads, the shop featured some of the best paint at the show. With lace, airbrushing, and crazy colors, the bikes were works of art.

One of our favorites at the show, wasn't technically even in the show, but a sidecar unit ridden in with a group of friends. We believe it to be a 1969 BMW R-60 with a Steib 501-model side car. Unlike the rest of the bikes, this was left as the factory intended. The wheels really set off the BMW and the restored factory stripes for the sidecar and no windscreen, looks killer. Would you ride it?

Let the comment hate begin. No kick stand, air ride suspension drops the frame to the ground. It's a mostly hand-built machine and love it or hate it, it was built by a talented guy. This is a prime example of taking the rat rod idea and investing more time and money into than the genre ever intended. Complete with Corona bottles as fuel gauges and a turbo housing as an air cleaner, it was entertainment.  It was also fun to stand and see how many people said, "oh wow, it's turbo charged."

Back Yard Bagger, of Winston-Salem, built these two bikes for the new TV show, Biker Live. The white bike actually does have a turbo charger. The front wheel is massive and the white-wall is not the tire, but a part of the wheel. They both also have air-ride suspension that drops the frame to the ground. We liked the fake patina paint job better than the metal flake #25 bike. The gas tank on the green, white bagger featured a unique leather and aluminum insert. The crew was thinking outside the box on some of these pieces.