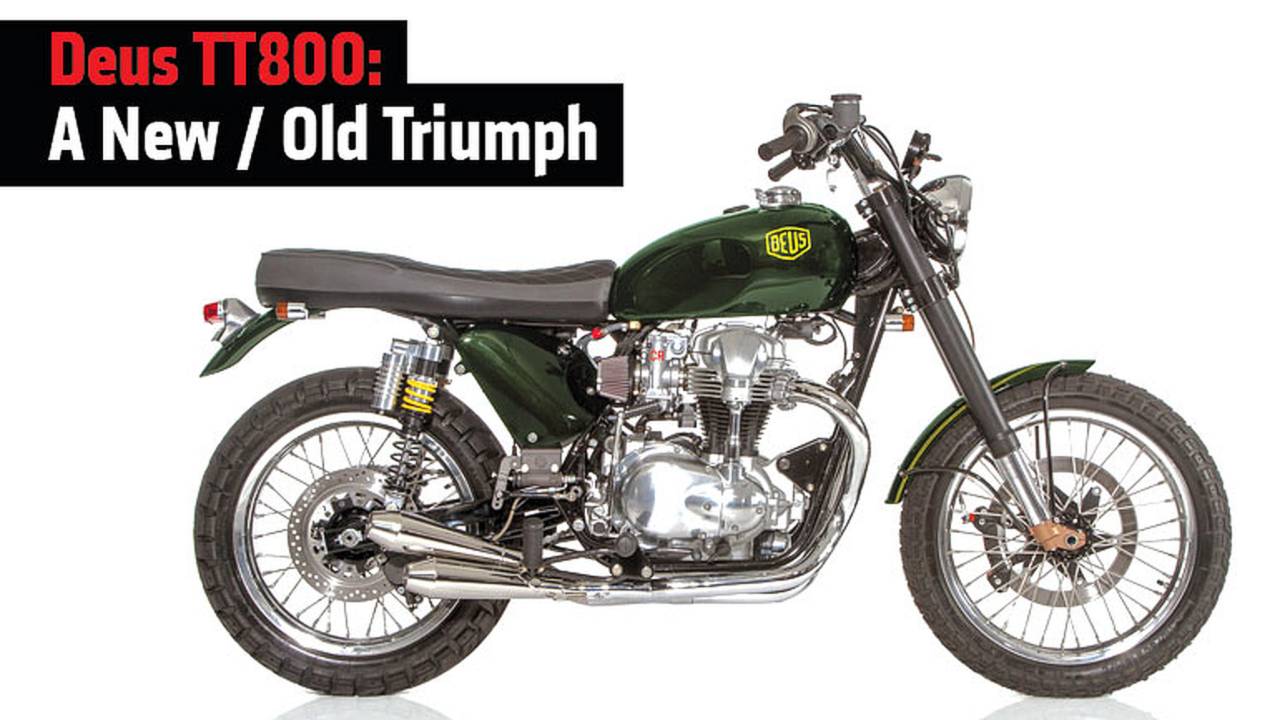 The latest one-off custom from Deus ex Machnia is bound for France where the owner specified the need for a new / old Triumph. Thus the Deus TT800 was born.

Moviedom’s greatest motorcycle jump ended in failure. You know the one: Steve McQueen, The Great Escape, a Triumph TT Special 650. McQueen’s an escaped POW who’s being pursued by Nazis, and the only thing standing between him and freedom is what looks like the entire German army and a massive barbed wire fence. So he does the most Steve McQueen thing possible:  jumps the fence on his stolen “German” military motorcycle, played onscreen by the aforementioned Triumph TT 650. He makes the jump and it’s awesome – and then he’s surrounded by the Germans and crashes.

Now, if you’re a fan of the movie, it’s hard not to wonder if McQueen would’ve fared better had he been on a more powerful bike. A little more power, and maybe The Cooler King escapes another stint in a Nazi POW camp. When I took a look at photos of the newest custom offering from Deus Ex Machina Motorcycles USA, the TT800, I wondered if builder Michael Woolaway was thinking the same thing. The company is an odd duck – they sell branded clothes, surfboards, and custom motorcycles – and their general aesthetic is retro, with a mid 60s to early 70s café’ racer vibe. So a build like this, recalling as it does one of the era’s great movies, fits right in.

According to the press release, the bike was built for a customer in coastal France who was looking for a “new, old Triumph” and will be used to “go to and from the beach”. While it sorta looks like a Triumph, the TT800 isn’t: the engine is from a Kawasaki W650, which Woolaway bored out to 800cc. The spec sheet says that the bike has a custom, Triumph-flavored exhaust, CR carbs, re-valved Öhlins forks, a custom gusseted swing arm, all wrapped up in a custom chromoly racing frame.

So…this is a beach cruiser? I suppose it could be. Maybe those knobby tires are good for zipping through the hardpacked sands of French Brittany. And there’s no rearview mirrors, but maybe one doesn’t need those when going to and from the beach. And there’s no speedometer that I can see, just a tach, but hey, no roads, no speed limit, right? Plus, if you’re going for a bike that’s built for casual jaunts, British Racing Green is an odd choice of color. My guess is that Woolaway meant for this badass machine to do a little bit more than make quick scoots down to the seaside.

The TT800 is a one-off bike, the latest in series of custom builds. It’s not available for order (yet), but if you’re interested in seeing some of the company’s other offerings – and have the cash to buy one – you can check out those out here.