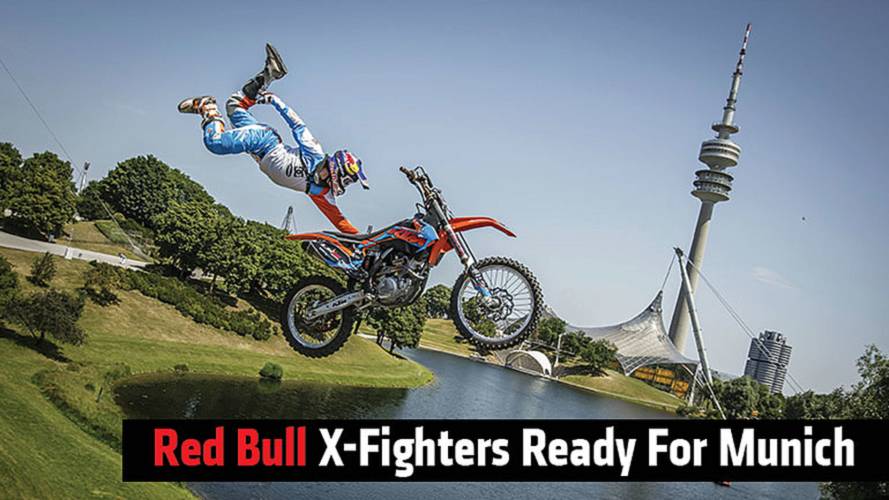 Fresh off an international high, Germany winning the World Cup that is, Red Bull X-Fighters aim to keep the euphoria going with their next stop on their global tour – Munich.

Fresh off an international high, Germany winning the World Cup that is, Red Bull X-Fighters aim to keep the euphoria going with their next stop on their global tour – Munich.
The world’s best FMX riders are looking to win world championship points on a first-of-its-kind track set up on a lake – a completely new and eagerly awaited experience for the riders and spectators. With weather forecasts of bright sunshine and rising temperatures, the ingredients are all there for an unrivaled weekend of sports.

If you caught the wild spectacle that took place in Spain you can bet that Munich will deliver a much wilder show. For the first time in the annals of FMX, the entire track will float on a body of water: the dazzling lake in famed Olympic Park. Each rider will attempt to shine on the superkicker, two quarterpipes, four regular ramps, and two gap jumps on the ingenious structure that weighs as much as twelve Boeing 747s. Covering the length of 1,475 feet, it’s also the first linear Red Bull X-Fighters layout, demanding outstanding rhythm, stamina and focus.

Until Pagès delivered his revolutionary run in Madrid, this season belonged to New Zealand’s Levi Sherwood, whose stellar performances in Mexico City and Osaka proved he was back to the form that made him the 2012 world champion. But Pagès, who took the title from Sherwood in 2013, came roaring back from a slow start to this year with an inspired first-place performance at the season’s midway point in the Spanish capital. Executing a gravity-defying double backflip, Australia’s Josh Sheehan was right behind, leaving Sherwood in third place at Las Ventas bullring despite near-flawless runs.

To tune up for the event in Munich, Germany’s young shooting star Luc Ackermann and his American rival Brody Wilson warmed up under bright, sunny skies in the nearby Alpine town of Garmisch-Partenkirchen in front of the world famous mountaintop panorama view. The two Red Bull X-Fighters riders performed a series of spectacular jumps on a meadow in front of Germany’s highest mountain, the Zugspitze that rises 9,700 feet above sea level. Wilson was especially impressed of the incredible scenery in Garmisch-Partenkirchen, a village south of Munich that hosted the 1936 Winter Olympics. “It doesn’t matter where you look,” he said. “Everything here looks like it could be on a postcard."

To catch all the action be sure to catch the live steam thanks to the official Red Bull X-Fighters website.