It’s that time again! Time to play Where’s HFL?! Guess who’s decided to play the game this time?! Motorcyclist magazine! Unlike last time, we didn’t even have to hide tiny watermarks in images, they decided to play by apparently copying their text straight from Hell For Leather! The following line is included on Motorcyclist’s website and in their March, 2011 print edition: “JT Nesbitt...

It’s that time again! Time to play Where’s HFL?! Guess who’s decided to play the game this time?! Motorcyclist magazine! Unlike last time, we didn’t even have to hide tiny watermarks in images, they decided to play by apparently copying their text straight from Hell For Leather! The following line is included on Motorcyclist’s website and in their March, 2011 print edition: “JT Nesbitt denounced the Diavel as ‘a monumental breach of brand trust and honesty,’” Where have we seen that quote before? I know, right here!

JT’s quote can be found in the second paragraph of the article titled “What The Hell?” in the March, 2011 issue of Motorcyclist and on their website here. In full, it reads, “...JT Nesbitt denounced the Diavel as a ‘monumental breach of brand trust and honesty...objectively compromised the performance of their motorcycle.’”

In the first edition of Where’s HFL? we secreted tiny HFL logo watermarks in images we published over a three-day period coinciding with last November’s EICMA motorcycle show, then challenged readers to find the publications that were ripping us off by finding where those images ended up. Turns out that nearly every online motorcycle publication pulls its content straight from us!

While that game was tons of fun for everyone involved, we were forced to soberly note the laziness and lack of respect for their readers it indicated in the offending publications. While copying your content from HFL is one thing since we’re such an outstanding source of information and images, copying from us could indicate that those publications also copy their content from other sources, sources which might not be so reliable. Can you really trust a publication that repeats rather than reports? 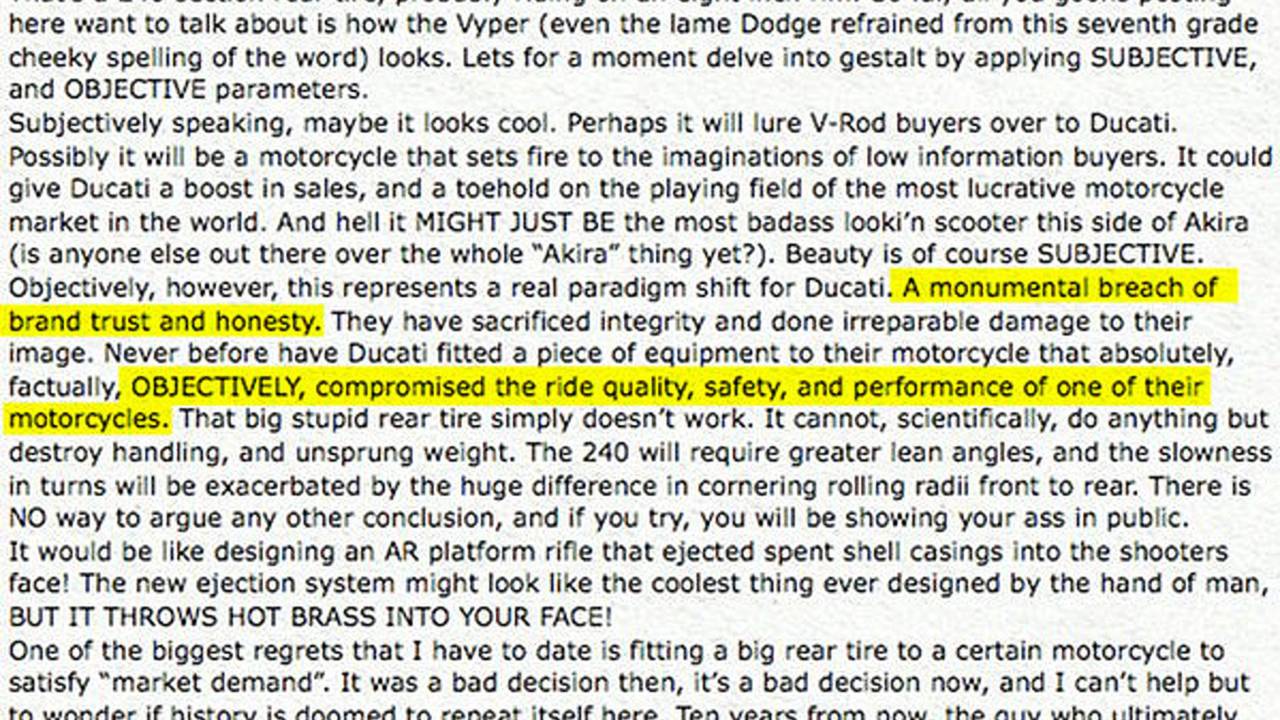 Now back to the matter at hand. Could it be that our old buddy JT simply said the same thing to Aaron?! We emailed him to make sure: 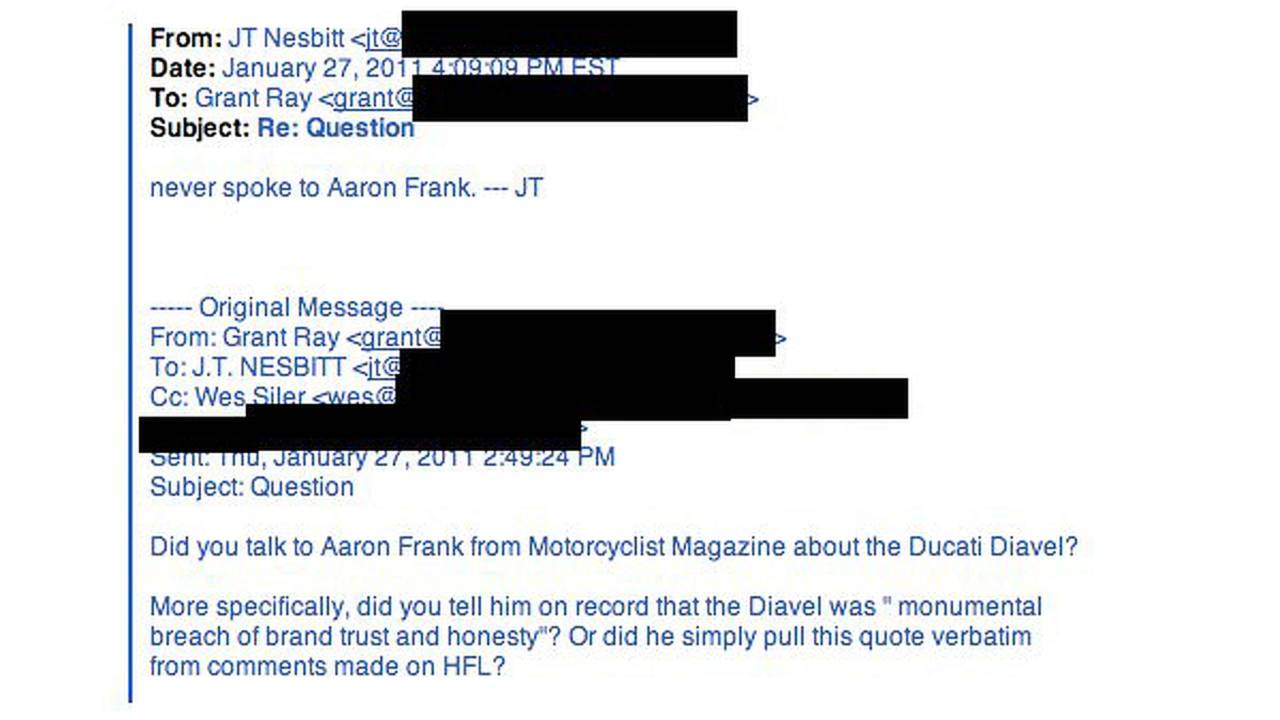 Could it be that the always hilarious JT shared that quote with someone else, who then shared it with Aaron? 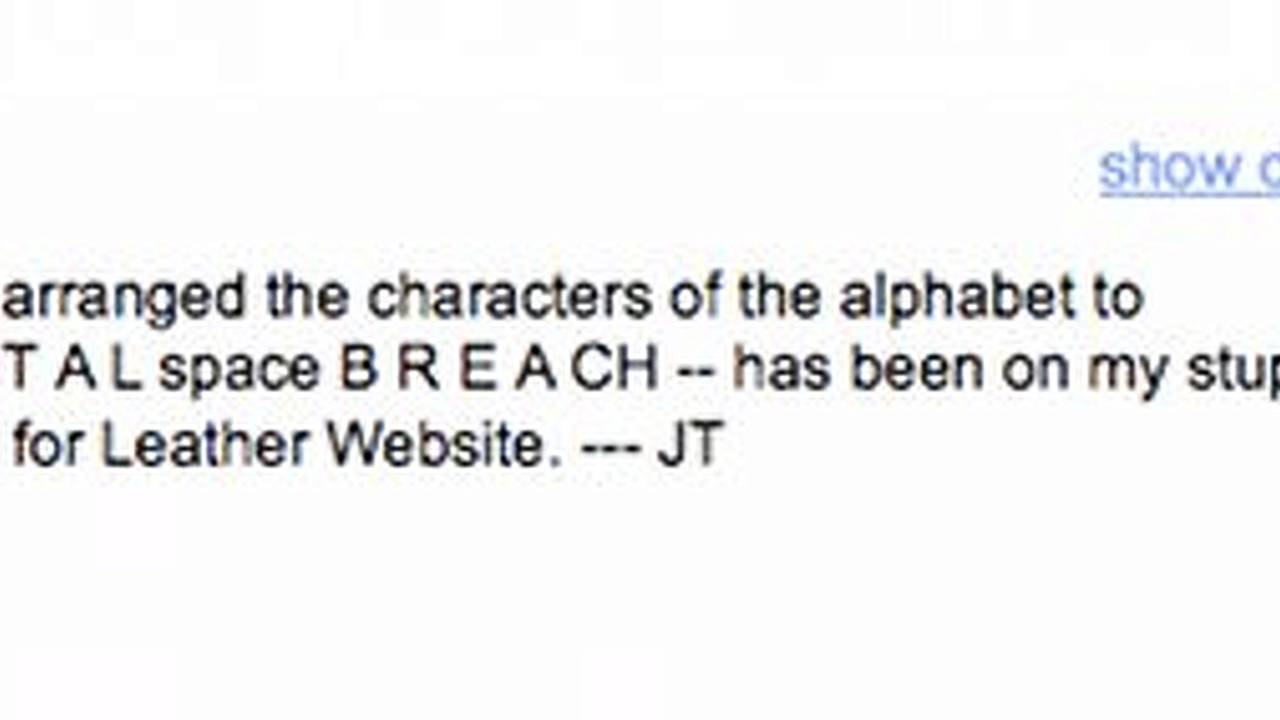 Not according to JT!

But, wait, how do we know that Aaron reads HFL comments, where JT originally made this quote?! Well, he’s an HFL commenter too! Here’s our favorite comment of the 15 he’s left under the pseudonym “Salad Shooter”: 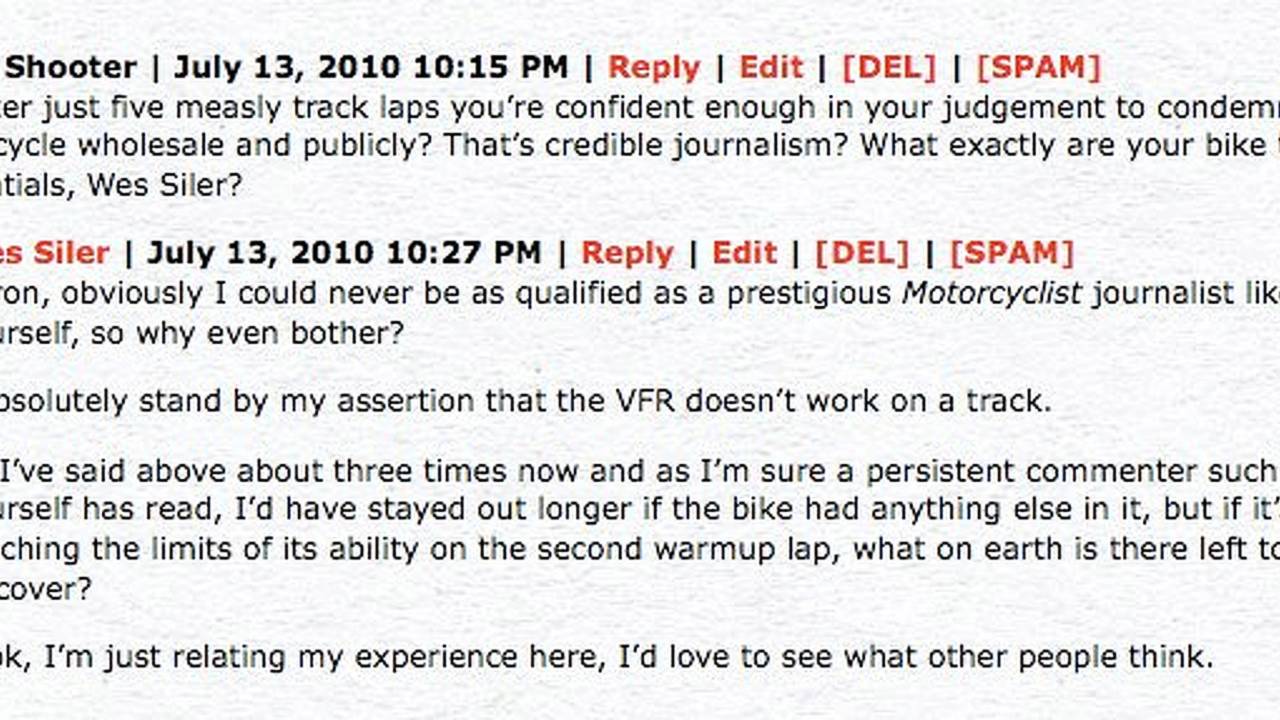 We reached out to Aaron and asked him where he found that quote:

“That came from Ducati Senior Designer Bart Janssen-Groesbeek, who designed the Diavel, during my interview with him this past November, in his office at the Ducati factory in Bologna,” he told us in an email!

Bart has yet to respond to our request for confirmation of this.

Now, why is copying something said in HFL comments a problem? Well, as we’re sure a credible journalist such as Aaron Frank knows, misrepresenting a source is unethical! He didn't cite our comments section as the source of the quote! Additionally, all content on Hell For Leather, including comments, is copyrighted, as is noted at the bottom of every page, and copyrighted user commentary is licensed to HFL, not to be exploited by other publications our users may or may not read!

As a subscriber, Aaron should also be aware that reproducing published material from HFL violates the terms of use he agreed to when he subscribed and violates the reader/publisher trust we work so hard to establish with each article!

Don’t worry Aaron, we won’t cancel your account this time, but consider this a warning. If you abuse our other readers and their ability to comment for selfish reasons, it’s a violation of our policies and can result in cancellation of your subscription without refund!

The thing is, all this is a bit silly. Aaron, had you emailed us to ask permission and agreed to cite us as the source of that quote, we’d have happily agreed! Hell, if you’d simply cited us, we’d be cool with it too!

By printing this comment, Aaron and Motorcyclist appear to be tacitly acknowledging the major role that our commenters played in the conversation surrounding the Diavel’s release. Exciting, right?! The thing is, by failing to properly cite you guys as the source, they’re denying you credit for that contribution! That’s just disrespectful to our readers!

What the hell, indeed!