How do you mechanically distinguish a bike in a racing class limited by spec engines and a minimum weight limit? So far, every Moto2 bike has been a variation on a theme — conventional perimeter frames and telescopic forks that seem to mimic the CBR600RR which donates its engine — with an air-intake through the headstock forming a notable technological innovation. Tiny Italian maker Vyrus’s ...

How do you mechanically distinguish a bike in a racing class limited by spec engines and a minimum weight limit? So far, every Moto2 bike has been a variation on a theme — conventional perimeter frames and telescopic forks that seem to mimic the CBR600RR which donates its engine — with an air-intake through the headstock forming a notable technological innovation. Tiny Italian maker Vyrus’s solution? Oh, what will be the first use of hub-center steering in World Championship racing since ELF last tried the idea in the mid ‘80s. But why stop there? These new studio photos of and details on the Vyrus 986 M2 reveal radical aerodynamic solutions that locate the radiator under the engine and a horizontal rear shock which sits sideways, nearly as radical as that front suspension. The best part? Vyrus plans to offer a road-going version later this year for just $34,000.

Update: 6 more high-res photos added to the gallery, for a total of 16.

Conventional telescopic forks dominate motorcycle design because they’re easy to set up, cheap to make and everyone’s used to them. But that doesn’t mean they’re an ideal solution. Because the forks compress and extend under braking and acceleration respectively, the steering geometry changes too. Steering becomes quicker, sometimes nervous even, under braking and slower and vaguer under acceleration. The compression under braking also makes the suspension less able to cope with bumps. With the wheel necessarily mounted a long way from the head stock, forks are also subject to flex. But, because telescopic forks are so pervasive, most of these issues have been reduced to mere trivialities. That still doesn’t mean it's an ideal solution.

In addition to separating braking, acceleration and steering forces, hub-center steering can reduce unsprung weight — meaning the suspension is better able to react quickly as the components below the spring have less inertia. Overall weight can be reduced as well. Check out how tiny the Vyrus’s omega frame is. The front swingarm bolts to the frame just ahead of the engine, eliminating the need for a frame that runs all the way to the top of the bike.

So, if hub-center steering is so great, why doesn’t every bike use it? Well, the complex system of linkages has traditionally removed rider feedback in the form of steering feel and proved immensely difficult to dial in to the right settings, enabling the bike to benefit from the theoretical advantages. This is where Vyrus’s expertise comes in. Its founder, Ascanio Rodorigo worked for Bimota developing the hub-center steered Tesi series of bikes and so has more experience with the technology than anyone else in the world. Reports of the company’s exotic road-going superbikes indicate that he’s found a way around all those problems. 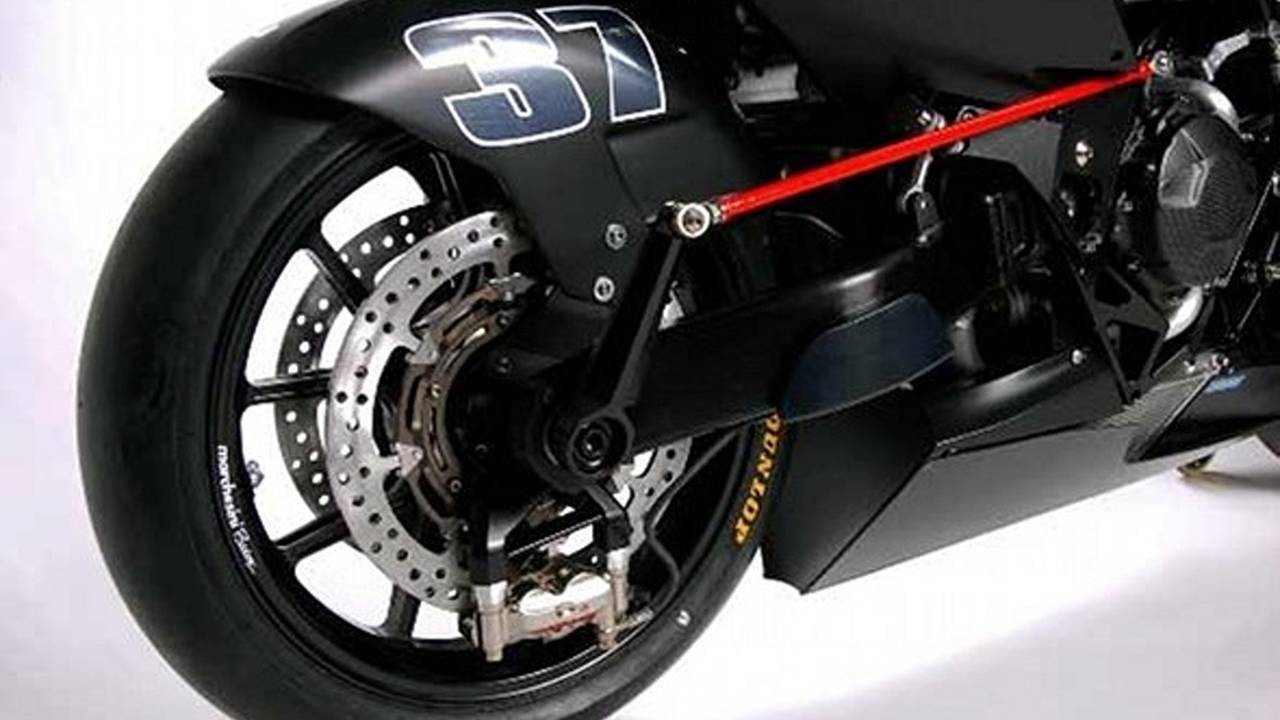 The steering function takes place through an hydraulic ram which actuates rods on the left side of the 986 M2’s front wheel. This ram doubles as a steering damper, further reducing parts count.

Wait, the radiator is under the engine?

Look at the way the fairing pinches together behind the front wheel. No radiator there. It’s actually under the engine in that belly pan. While the 986 M2 benefits from significant wind tunnel time aimed at reducing its frontal area, it’s likely that the real advantage here comes in cooling efficiency. Where traditional radiators — stuck on the front of engine blocks — have trouble flowing air at high rates of speed because it hits that engine just inches behind, this setup takes advantage of a bike’s natural aerodynamics to increase airflow over and through the radiator. As a radiator is essentially and water-to-air heat exchanger, this means better cooling.

The 986 M2’s radiator is laid down horizontally in a V-arrangement and air is pulled over and through it via the ducts in that racing-mandatory bellypan (it catches fluids). High pressure air enters the front and is drawn through ducts which allow the low pressure air behind it to pull the air through.

Did Moto2 bikes have a problem with cooling because of their conventional radiators? No, but why do things the same way as everyone else?

Check out the exhaust

Dual exits that look kinda like Ascanio’s glasses are mounted on either side of the rear shock. The pipes themselves are titanium, but carbon covers protect the rider’s feet and that shock from their heat. Mounting the exhaust low and far-forward like this should improve mass centralization, making the bike quicker to turn as mass is concentrated near the center of gravity and therefore requiring less effort to move. Zard is making the silencers. 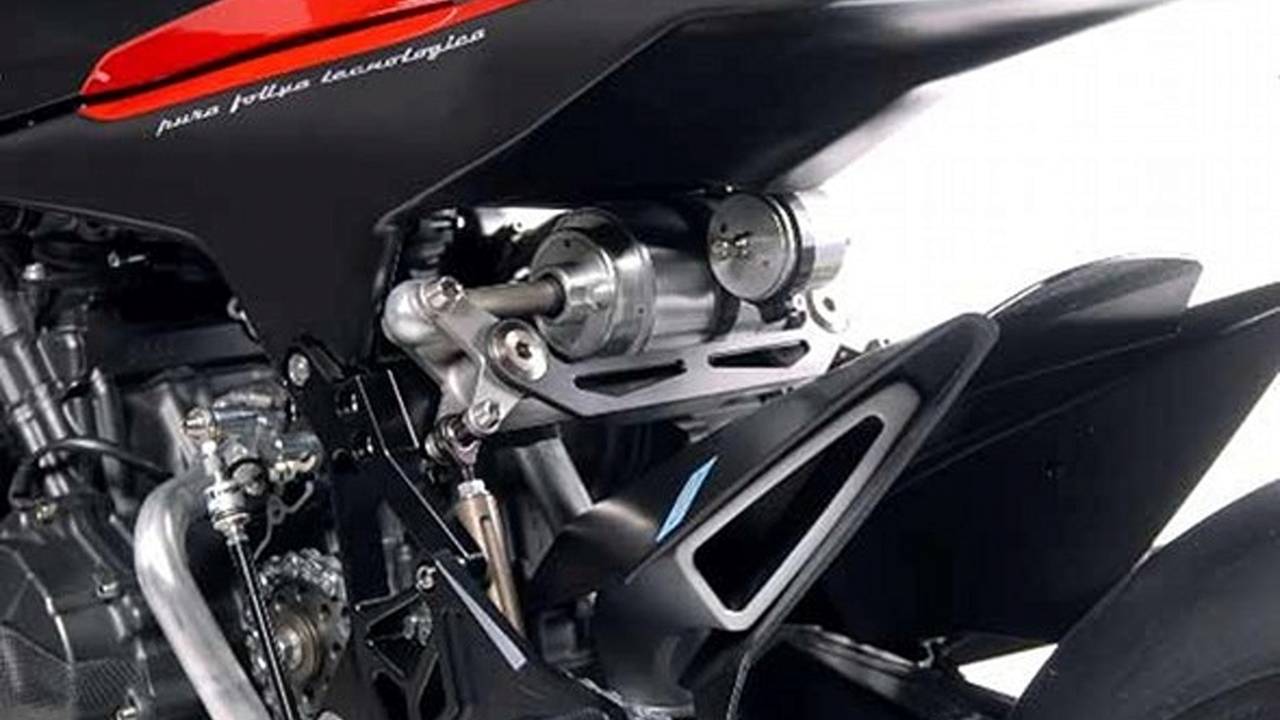 Us too! Not only is the rear shock mounted horizontally, but it sits at 90-degrees to the bike’s direction of travel and the typical shock orientation. It’s actuated through the rocker arm you can see below it and there’s no spring, both damping and springing duties are handled by the magical power of air.

Mounting the shock sideways brings packaging benefits. Typically, designers have to account for both the height and length of a vertical or diagonal shock while packaging the components, so this could lead to a shorter wheelbase. The distance between Vyrus’s wheels is just 1325mm, comparing favorably to competition like the FTR Moto2 racer, which has a 1390mm wheelbase.

Anything else crazy going on?

Well, the tank and front fairing are a single, self-supporting unit made from carbon fiber. The advantages of this arrangement are, again, a lower weight and reduced parts count, but we’d worry about the cost of replacing the whole damn thing after a crash. The seat, too, looks to be a self-supporting carbon fiber unit.

The lack of a conventional steering head means’s Vyrus can easily achieve a straight path for the air intake from the point of highest pressure — front and center — to the airbox without resorting to crazy stemless steering heads like Bottpower had to do.

The frame is incredibly sexy — milled from billet aluminum — but also incredibly simple, effective serving as connecting points for the two swingarms.

Is Vyrus entering a Moto2 team themselves?

It doesn’t look like it. Instead they hope to sell the 986 M2 to teams which will then campaign the bike in the Championship. Ascanio says he expects the first units to be available in March and somehow plans to sell them for around €54,200, €90,000 less than some other bikes on the Moto2 grid. We have no idea how he’s making it so cheap. 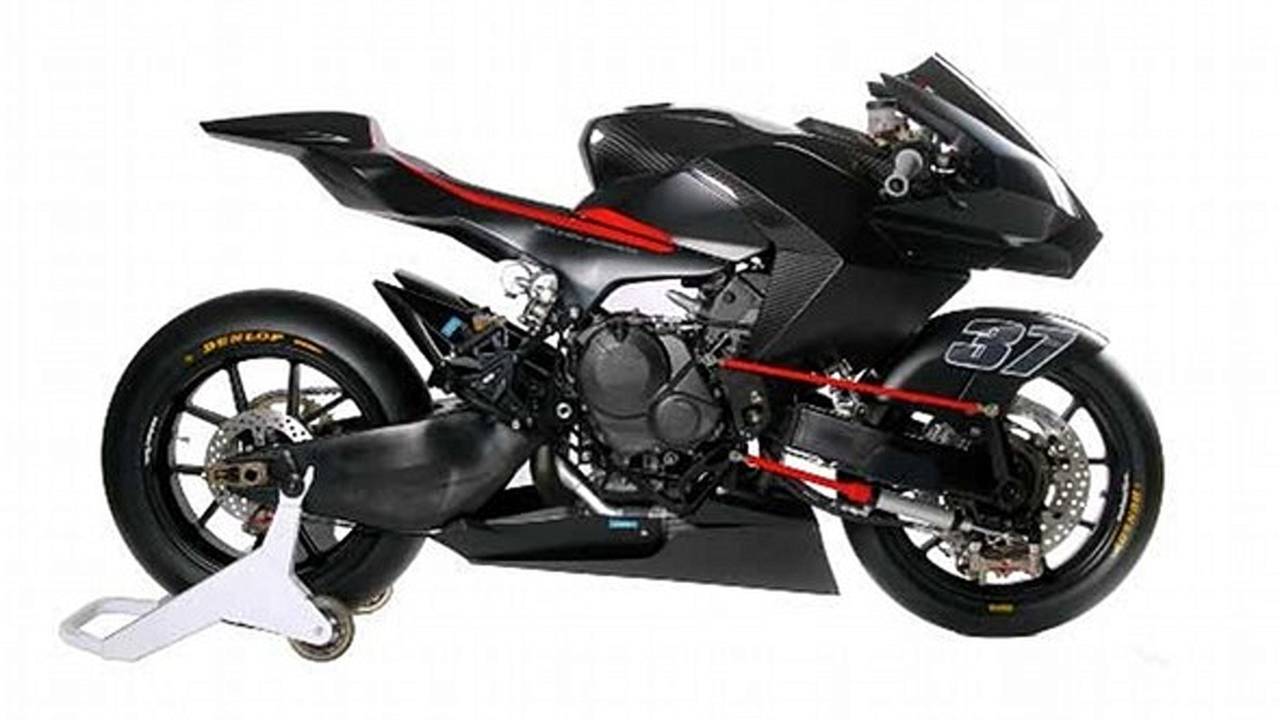 So there’s going to be a road version that I’ll be able to buy, put in my garage and, when no one’s looking, lick?

Yes! Ascanio Rodorigo says sales of the production version will start in September and the price will be €24,925. He also plans a trackday version that will come sans engine for just €16,542. 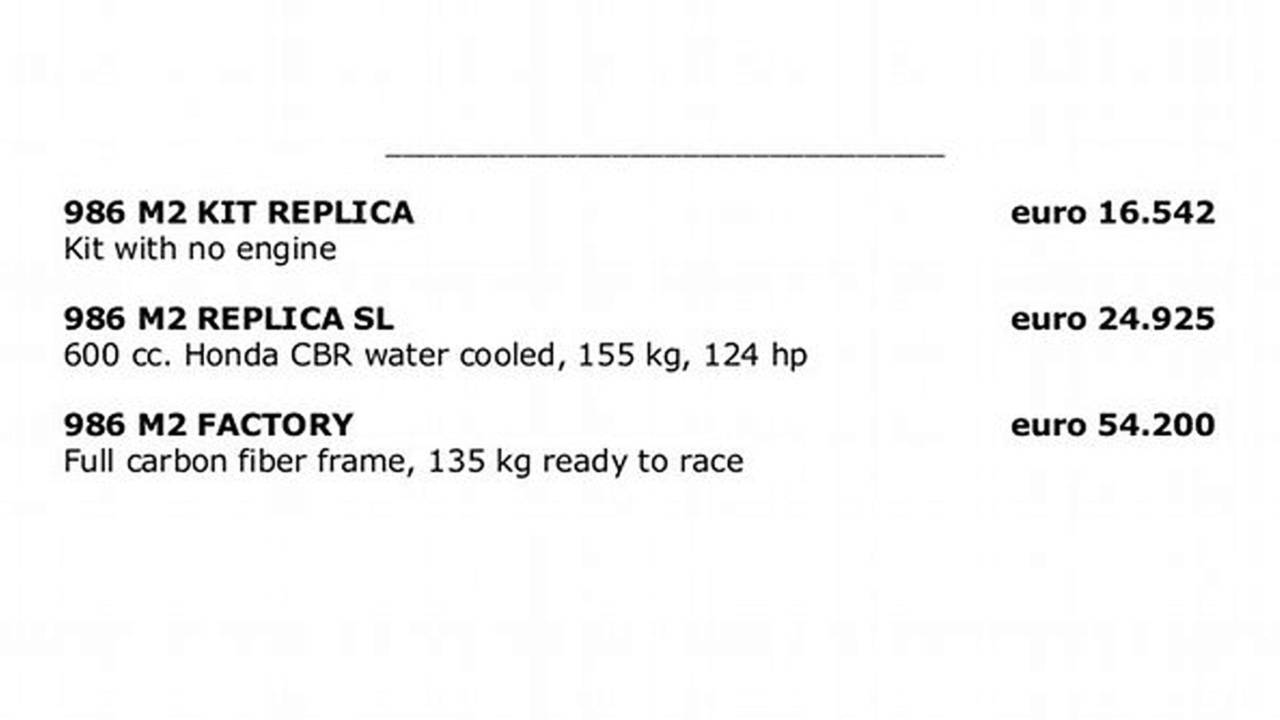 Number of cylinders 4 in line 4 stroke