Best of Both Worlds: Canyon Carving and Freeway Competent 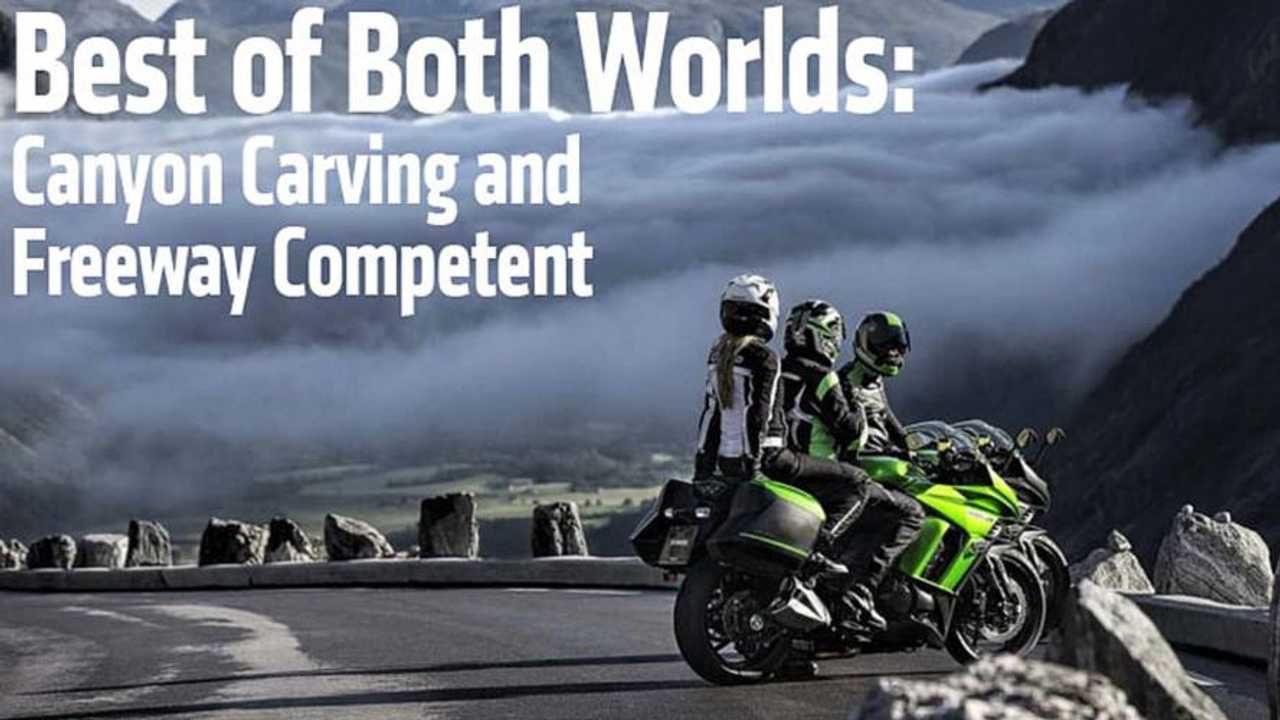 Can't decide if you want to buy a bike for canyon carving motorcycle or for taking trips on? Why not one that does both? Here are seven that fit the bill.

Last week, we had an awesome discussion about the best performance motorcycle for the street. We heard a ton of different opinions, but one major theme we noticed was people making sacrifices in outright performance for a bike that could do a little distance. Here are the bikes we’d choose to get you from a ride on the highway to the canyons you need to carve.

What’s the difference between these bikes and the absolute best bikes for street performance you ask? These bikes add a little power and a little weight, making them geared better for sitting on the freeway and they are also slightly more stable too. A KTM Duke 690 is one of the best thing’s I’ve ridden on a twisty road (though our reader Bammerburn’s 636 looks pretty awesome too) but the vibes of the KTM’s single cylinder, or high pegs of the 636 make them uncomfortable for long stints on the freeway or after sitting on them for a few hours. The bikes recommended here split the difference. They offer more comfort for freeway rides, but still carry the power to perform like you want them to on the twisties.

Kawasaki’s 1000cc upright sport bike makes 140 horsepower, 82 pound-feet of torque, and comes with ABS and traction control. It should stop there, but if you need more convincing, it gets higher spec brakes than Suzuki’s Hayabusa or GSX-R1000. This bike is incredibly easy to ride around town, touring, or riding fast on a fun road. RA readers Jeremyobryan and Bob both felt like it did double-duty better than anything else, and we tend to agree with them.

The Speed Triple (and Street Triple) R was the choice of many for best street performance bike. We went with other options as we’d rather be on something like the Ducati Hypermotard SP or KTM Duke for pure twisty riding as long as it was close, but both those bikes require aftermarket additions to make them capable of anything more than brief stints on the freeway. The Speed Triple R, with its upgraded brakes and suspension, and that incredible smooth and 133 hp and 82 lb.-ft. of torque makes sitting on the freeway a breeze and wringing it out on tough roads incredibly rewarding.

We’ve said it before and we’ll say it again, there really isn’t anything that is all-around as good as the Ducati Multistrada. Semi-active suspension, multiple throttle configurations, ABS, and traction control, paired with a 155 hp engine delivering 92 lbs.-ft. of well spread out torque make this Multistrada very tailor-able to you needs. It’s one of those bikes that out performs your expectations and we have a hard time seeing a reason to take anything else. Watch Jamie Robinson ride it around Spain here.

We’ve covered our love for supermoto’s time and time again, here at RideApart, so a bike called a “Supermoto Touring,” or “Supermoto Travel” depending on who you listen to, seems like it would fit the bill pretty perfectly. If we’re being honest, we actually haven’t had a chance to ride the 990 SMT yet, but it sits shoulder to shoulder on a very short list of bikes we’d want to own personally. Reports put the gas mileage in the low 30 mpg’s which, while we don’t love to see, is probably something that we would put up with for that beautiful motor and KTM quality component setup. Anyone want to bring their SMT by for a spin?

The FZ-09 is on the sportier side of our list, but we were impressed with its ergonomics and great gas mileage and felt it deserved a spot on the list. The 847 cc triple makes a modest 115 hp and 65 lbs.-ft. in one of the flattest torque curves we’ve seen. Despite having such a fun engine, the FZ-09 gets 40-45 mpg and, if that wasn’t enough of a savings, the bike itself retails for only $7,990. The seating position is upright to a degree that its comfortable, while just forward enough that I wasn’t turned into a sail. I even found it to be the perfect angle to use the wind to hold my 6-ft. frame up without much work. While the engine of the Yamaha is beautiful, the fueling needs a re-map to deal with being a tad jerky, and the suspension needs an upgrade if you’re really going to put it through the paces. Still, if you’re looking to ride a few hours to have fun on a nice road for cheap, this is your jam.

This de-tuned version of Honda’s CB1000RR makes for a brilliant all-rounder, though is slightly less sophisticated compared to Kawasaki’s Ninja 1000 and its fancy traction control. We spent some time on the CB1000R and were impressed with both its comfort over long periods of time and how much it made us want to misbehave. We’d be hard pressed to choose the Honda over the Kawasaki in this category, but have no problems should you choose to do so.

Yes, I’m aware the purpose of this list was to discuss things that were fast and yet still comfortable, thus ruling out sport bikes. The thing is, the Hayabua is actually really comfortable (and this is coming from a guy who’s very rarely comfortable). We did a 190-mile loop for the launch of the 2013 Suzuki Hayabusa, something that normally would have me wincing with wrist, knee, and back pain but, after a full day of riding, I was ready to go back out and do it again. Obviously, the Busa is big as far as sport bikes go and, if you read my review, you’ll see we also found the brakes to be a little too squishy; both making the Hayabusa not as canyon capable as its 600 cc or 1000 cc counterparts. Regardless, it’s still a whole lot faster and more fun to ride on twisty roads than most bikes, while surprisingly capable on the long haul.

How far do you typically tour to get to your favorite twisty road? Which of the bikes on this list do you think does the job best?