Watson On: CDC Proposal For Mandatory Helmet Laws Across The U.S. 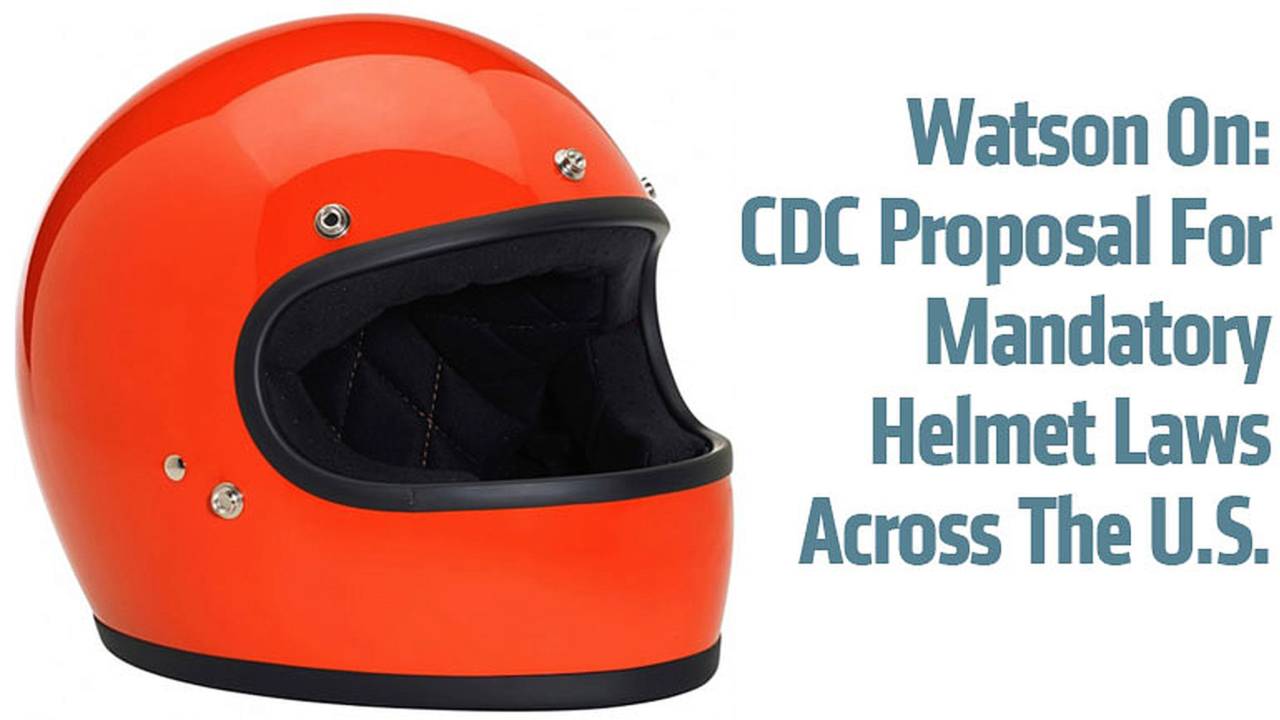 A federal task force is preparing to recommend mandatory helmet laws across the U.S., here are out thoughts about what that might mean for motorcyclists.

The latest news that a federal task force is preparing to recommend mandatory helmet laws across the U.S. shouldn’t have really surprised me. But it did and now when I consider it, I think it’s a done deal. Very soon we’re all going to have to wear a crash helmet whenever we get on a bike and ride anywhere in the U.S.

RideApart recently ran the story outlining what the current situation is and we are all now waiting for the Community Preventive Service Task Force (try saying that out loud in a full ace crash helmet) to put forward its final recommendation, which is promised sooner rather than later.

There is no way that I can see the 15 members of this committee, who were appointed by the director of the Centers for Disease Control & Prevention (CDC), making any other proposal to U.S. Congress than recommending that all of us who ride motorcycles wear a crash helmet at all times.

The CDC is based in Atlanta, GA, and its role is to “protect America from health, safety and security threats, both foreign and in the United States.” I’m not entirely sure why the CDC gets to make this proposal to Congress and who precisely the 15 members of the committee are, or if they ride or have any motorcycling background.

This though is an age-long argument that has raged from the very first days that helmets became mandatory in some states. It began way back in 1966 when Congress passed the Highway Safety Act and initially it provided financial incentives for States to started making the wearing of helmets compulsory. Prior to this there were no laws, no requirements and you could choose whether you rode with a helmet or without one.

But less than two years later, 38 states had passed mandatory helmet laws thanks to cash incentives from the government. Those that didn’t follow suit were subjected to a withholding of federal funds until a law was passed. By 1975, 47 states (including the District of Columbia) had adopted the policy.

But it was a short-lived victory for the government as motorcycle enthusiast groups started to push back and question its decision. A few courts in some states even upheld that it was unconstitutional, only at a later date for that ruling to be to overturned. So the battle has raged on since the late 1970s right up until today.

But less than 10 years later, after the first law was introduced, states that once made it mandatory to wear a helmet on a motorcycle began to have second thoughts. Not because they believed that the motorcyclists were actually right but because the financial incentives that had been paid to them before to introduce the law were suddenly dropped.

Since then the subject has gone around and around and around. Even as recently as last year, Michigan dropped its longstanding law requiring all motorcyclists to wear helmets and left it down to the individual to decide. I’m not entirely clear why Michigan had a change of heart or what prompted it.

There were though some conditions though. You must be over 20-years-old and have at least $20,000 in medical insurance coverage. Seems fair enough to me.

But as we stand today, you have to wear a helmet on a motorcycle in 19 states, while 28 require you must be over the age of 18 to choose if you wear one or not. Only New Hampshire, Iowa and Illinois have no law at all.

But I think things are going to change big time once we know about the CDC’s final recommendation to Congress, which we all know is not going to advocate motorcyclists choosing for themselves. Then it will be just a mater of time; maybe in a couple of years, if you ride a motorcycle anywhere in the U.S., you will have to wear a helmet.

Is this a bad thing? We at RideApart recommend that you wear you gear all the time including a crash helmet. But we don’t tell you which bike you should ride or where you should go on it, or what you choose to wear on your head. We’re all adults and have to make our own decisions in life.

All I can say at this point, if you live in one of the 19 states where you are old enough to choose or the three where it doesn’t matter what age you are, enjoy your last minutes of freedom while you can. Very soon you’ll be like the rest of us and you will have your head protected on every ride.

How To: Spot an Unsafe Motorcycle Helmet

Prevention: 10 Common Motorcycle Accidents & How To Avoid Them