RideApart Motorcycle Of The Year Awards

This was an awesome year for motorcycles. Find out who wins bike of the year in the first-annual RideApart Motorcycle Of The Year Awards.

This was an awesome year for motorcycles. Not only did we get a new fastest bike ever — the Ducati 1199 Panigale R — but affordable, small-capacity bikes hit the market in large numbers, making motorcycling more accessible for everyone. Electric motorcycles also continued to develop, pointing the way into the future. But, which ones were best? Find out in the inaugural RideApart Motorcycle Of The Year Awards. 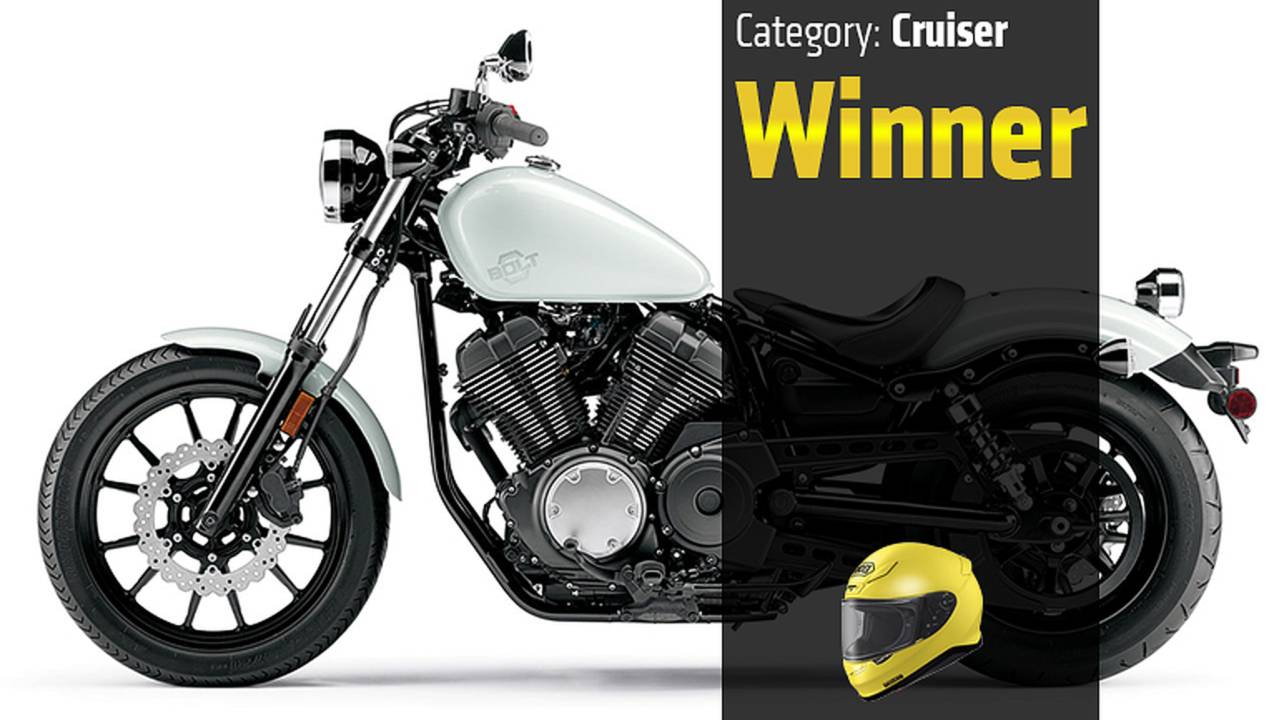 How It Moves The Needle: Ever since the Japanese manufacturers beat Harley back in the early 1960s, then started building Harley clones in the 1980s, not a single one has managed to match the simple, honest looks of the Sportster. Enter 2013, that’s what the Star Bolt has unleashed on the cruiser category. Since this is a Japanese motorcycle company, they didn’t stop there, adding things the Harley has never had, like handling, brakes, safety and comfort, too, all for about the same price.

Why We Chose It: The above might sound like a regressive approach, but it’s one that meets market demands. Hopefully the Bolt will be a gateway drug for young riders, giving them enough of a taste of a modern motorcycle that they’ll want more. 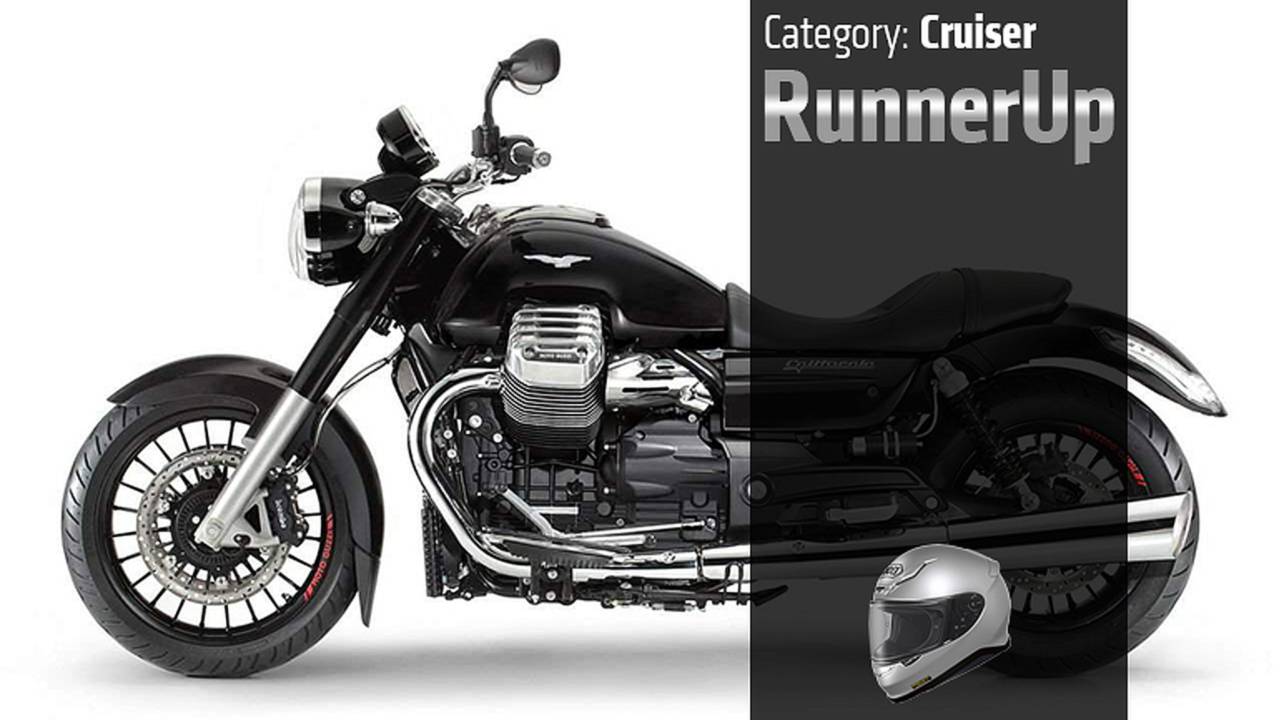 How It Moves The Needle: Want a motorcycle and a brand with tangible history, quality and a compelling underdog story? Look no further than Moto Guzzi. The California 1400 has all the looks, character and presence you could ever want from a cruiser, but rides like a 21st century bike. Handling and brakes are safe and genuinely good, even when compared to performance-oriented motorcycles. And that big V-twin’s rumble and quirkiness still conveys a primal motorcycle experience in an incredibly emotive way.

Why It Didn’t Win: It’s very expensive and very heavy, relegating it to the realms of a luxury item. Guzzi has a much more affordable range of bikes just over the horizon, and we can’t wait to ride them. 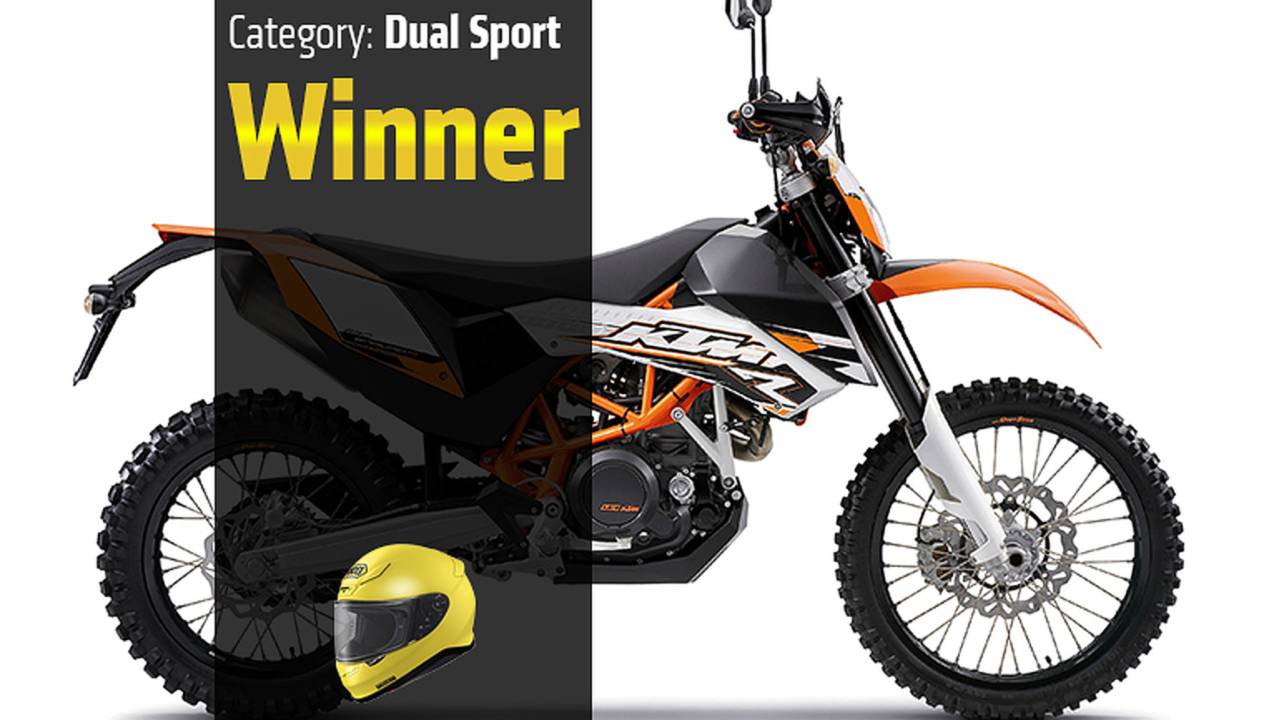 How It Moves The Needle: Simply put, the 690 Enduro R is the most capable dual-sport motorcycle out there. Sure, it costs more than $10,000, but it comes stock with all the fancy stuff you’d have to bolt on to a cheaper bike to get it to perform.

Why We Chose It: At the Taste Of Dakar early this year, it was the Enduro R that was the highest performing motorcycle out there. Not only that, but most of the guys with them had ridden them there over hundreds of miles of highway. 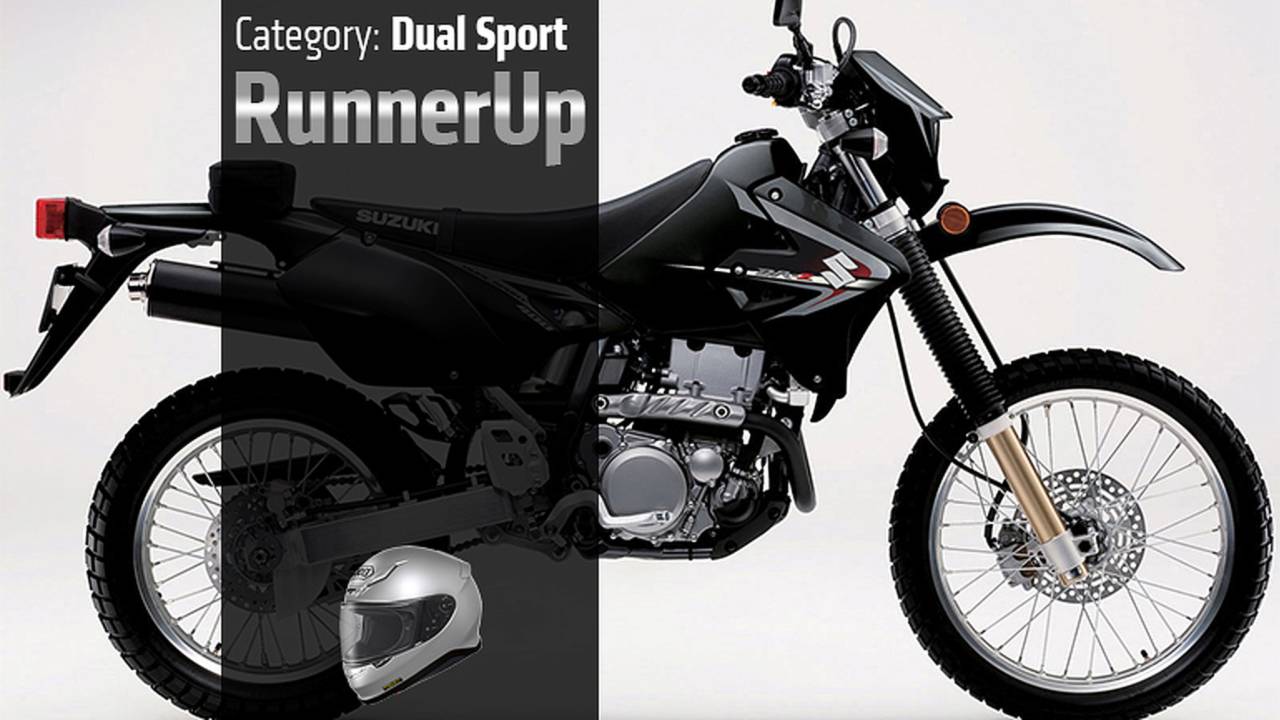 How It Moves The Needle: Old as dirt, but tough as nails. The DR-Z gets more people dirty in a road-legal fashion than any other bike out there.

Why It Didn’t Win: Takes a ton of modification before it’s genuinely capable. Starting with the absolutely rubbish “Death Wing” tires. Come on guys, at least fit quality rubber as standard. 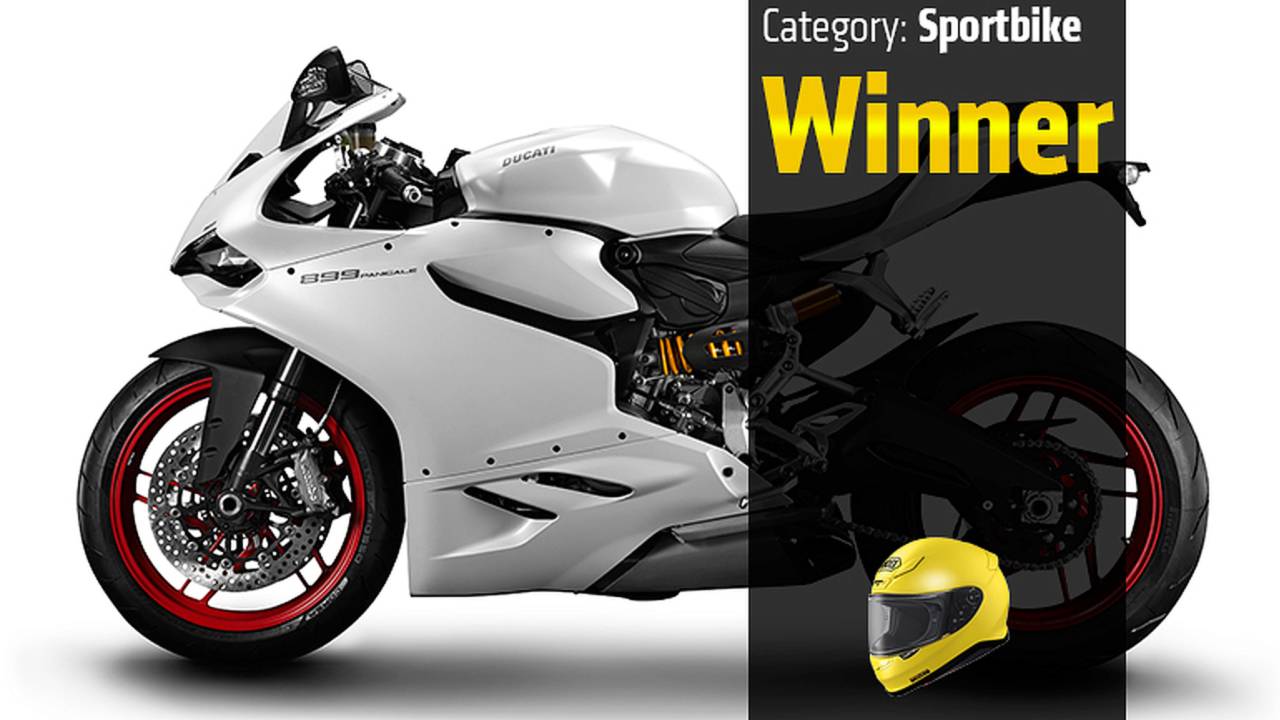 How It Moves The Needle: The Panigale formula is genuinely revolutionary, ditching the frame, achieving unprecedented performance and wrapping that up in futuristic looks. On the 1199, you spend the entire ride managing the ridiculous power output. On the 899, you just ride the thing. Hard.

Why We Chose It: Much more than just a smaller motor, the 899 is simply a sweeter, more exploitable, more agile package. One that’s backed up with very capable electronic aids that made riding it at Imola in the rain not just safe, but positively enjoyable. It’s the best sportbike Ducati makes, and the best one you can buy right now — full stop. 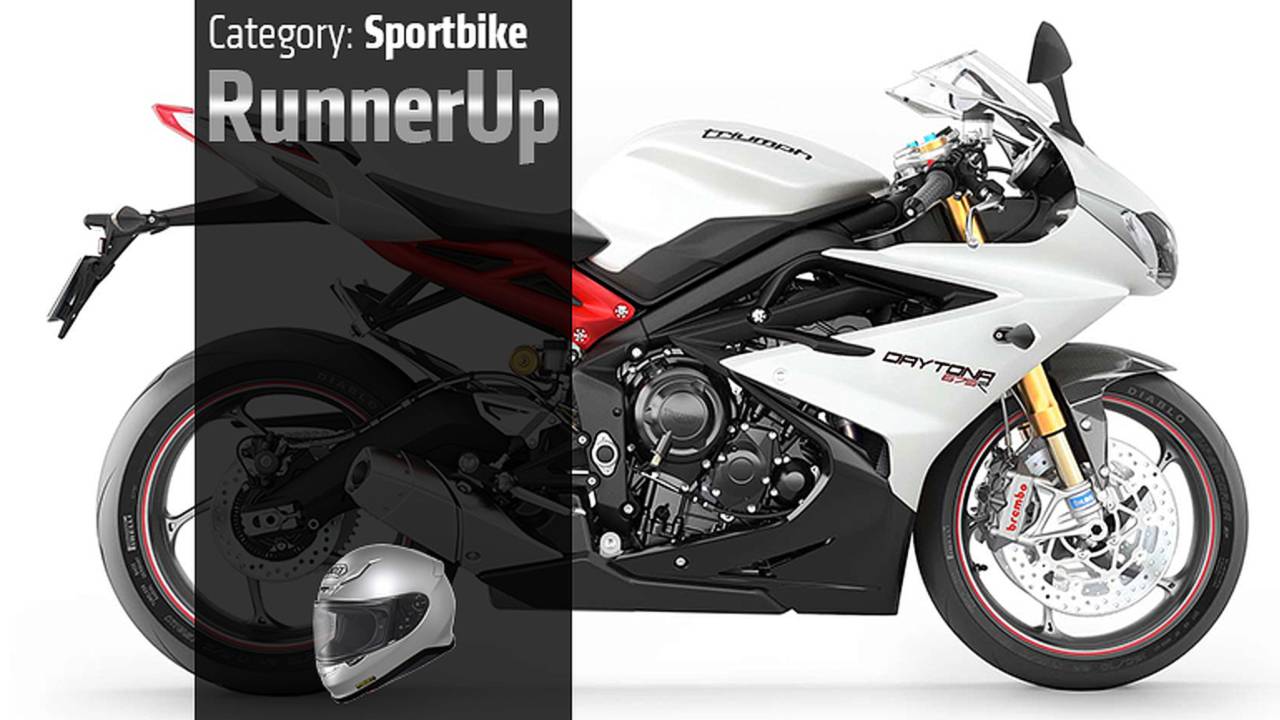 How It Moves The Needle: Incredibly agile handling backed up with a jewel-like motor and high quality suspension and brakes. Likely the best handling sportbike you can buy right now.

Why It Didn’t Win: Two reasons. One, the Daytona's styling is a step backward; while it's a better performer than the model it replaces, the 2013 model looks older than the previous version and appears cheap, despite the fitment of top-shelf Ohlins suspension and Brembo brakes. Two, it only works on the track. Riding one of these on the road is a frustrating lesson in knot tying. 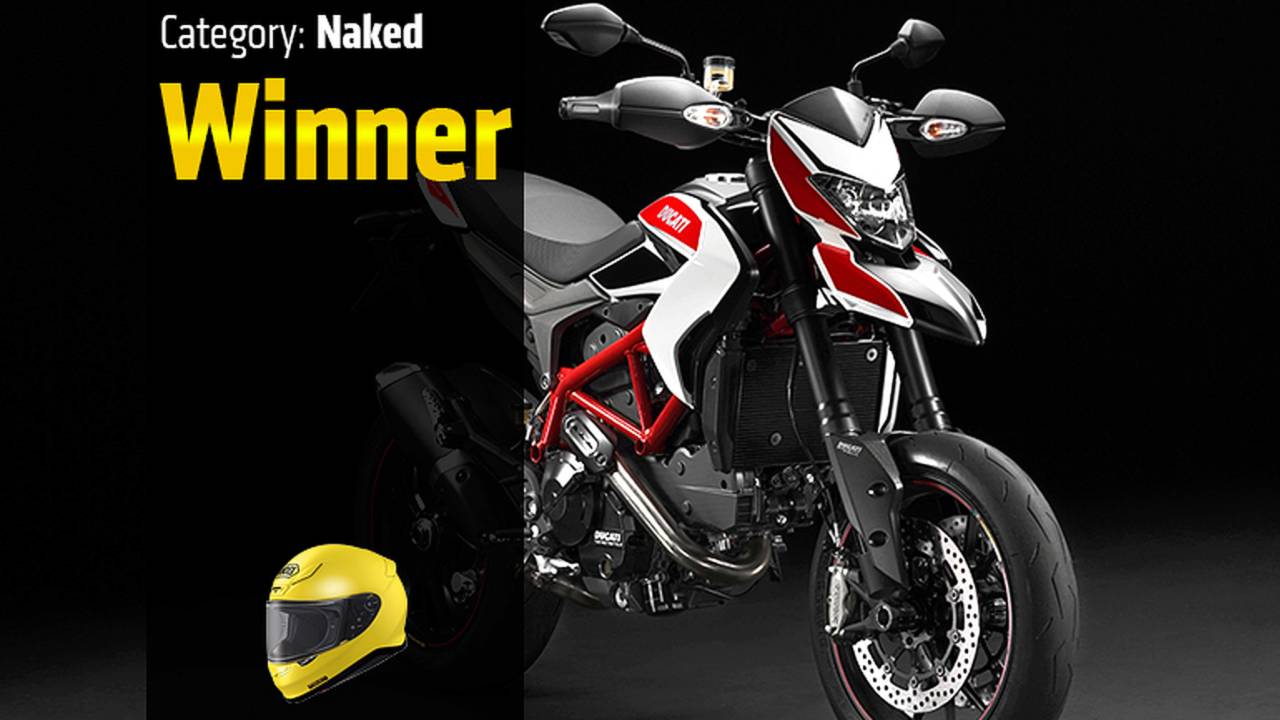 How It Moves The Needle: The most fun street bike we’ve ridden this year. The new liquid-cooled motor is punchy and easy to use while the chassis is even more compact and agile than before. Combine that with Ohlins suspension and Brembo brakes and you’re onto a winning formula.

Why We Chose It: Who cares if it’s kinda, sorta an overly-large supermoto. It’s got flat bars and no fairing and does the best job of filling the traditional naked virtues of city-speed fun and comfort of anything out there right now. 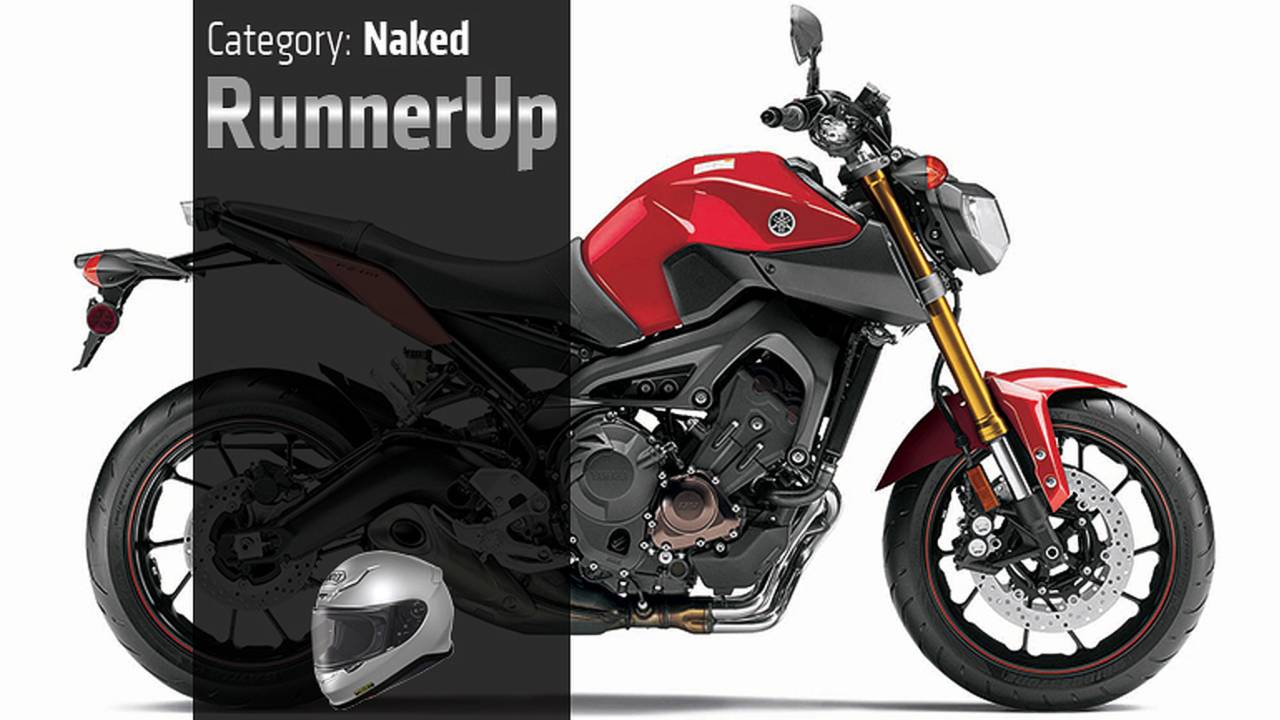 How It Moves The Needle: An awesome new three-cylinder motor at a shockingly affordable, $7,990 price.

Why It Didn’t Win: Too-cheap suspension and flawed fueling keep it from greatness. 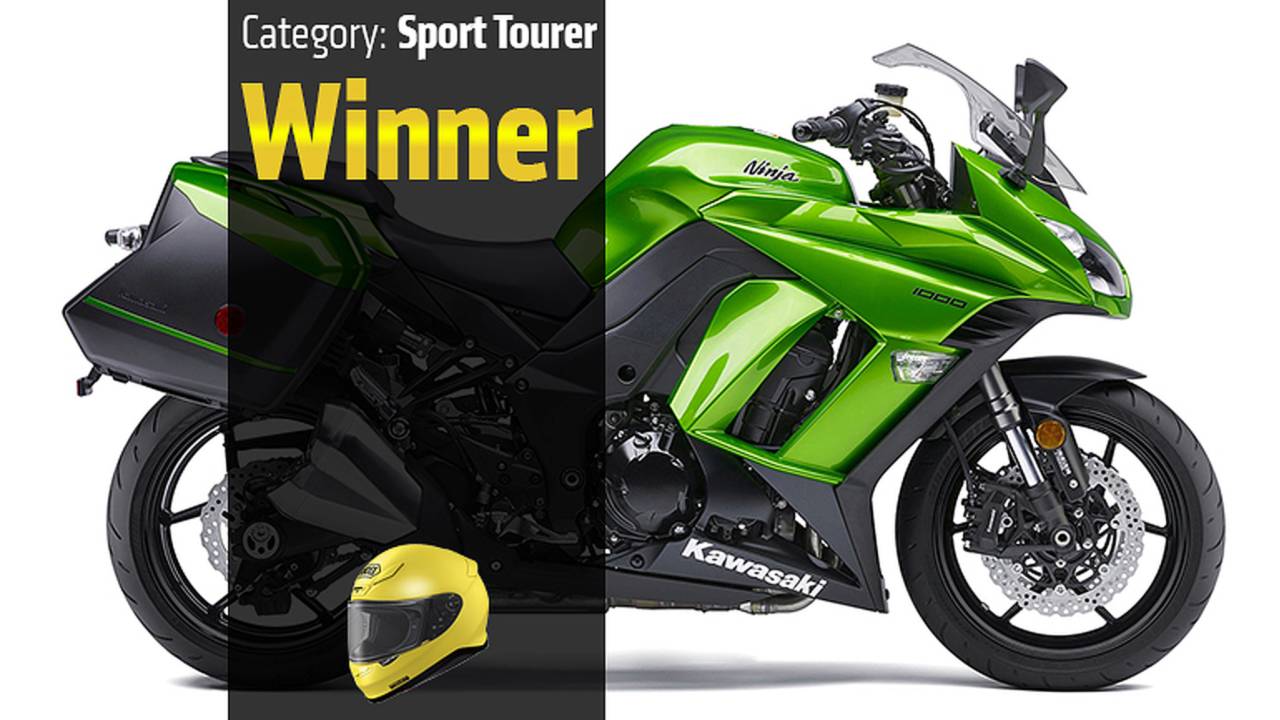 How It Moves The Needle: Simple, honest comfort and practicality combine with strong performance to make this a fast bike you can ride day in, day out.

Why We Chose It: It makes more expensive sport touring bikes like the VFR1200, ZX-14R, and Hayabusa look silly. The Ninja 1000 is just as fast in real world riding and way more comfortable, while also coming in at a much lower price. 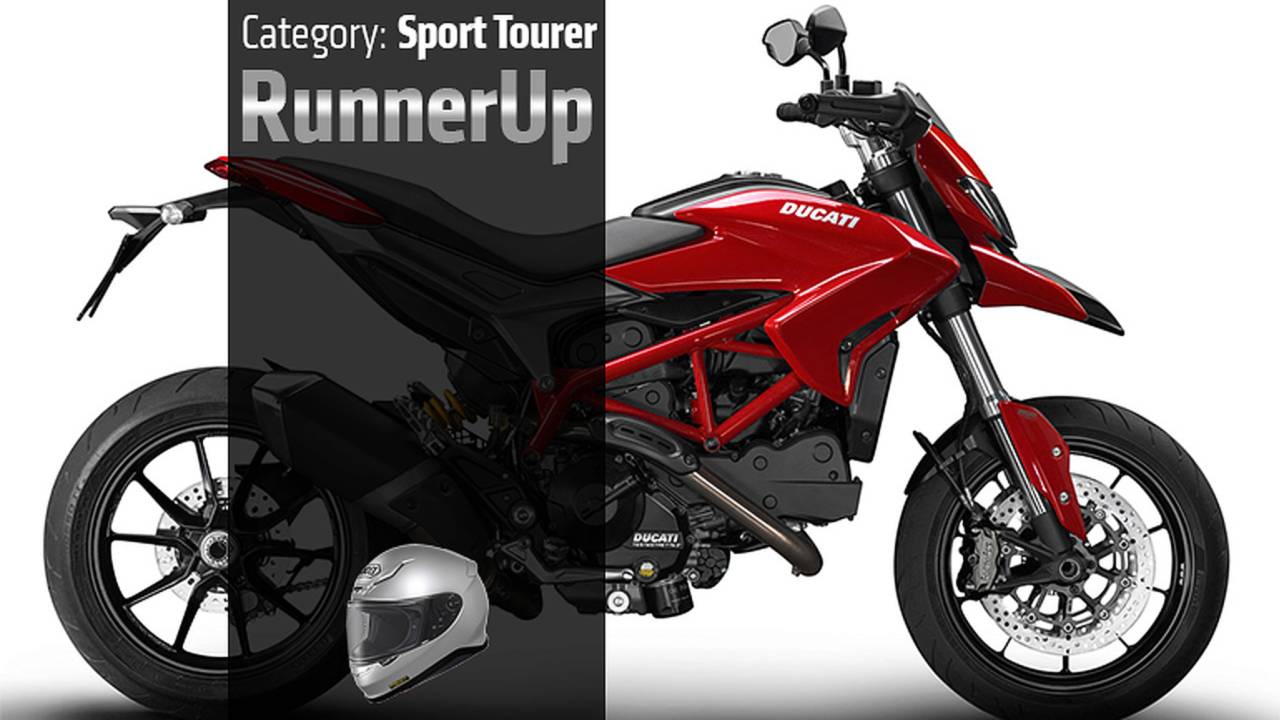 How It Moves The Needle: Take the winning Hypermotard package and fit a more comfortable seat and a surprisingly effective bikini fairing. Voila, an incredibly fun bike that’s happy on the highway.

Why It Didn’t Win: It really needs the suspension and brakes from the SP to make it great. You can build such a bike by buying an SP and bolting on the fairing and optional “comfort” seat, but doing so is a bit of a hassle. 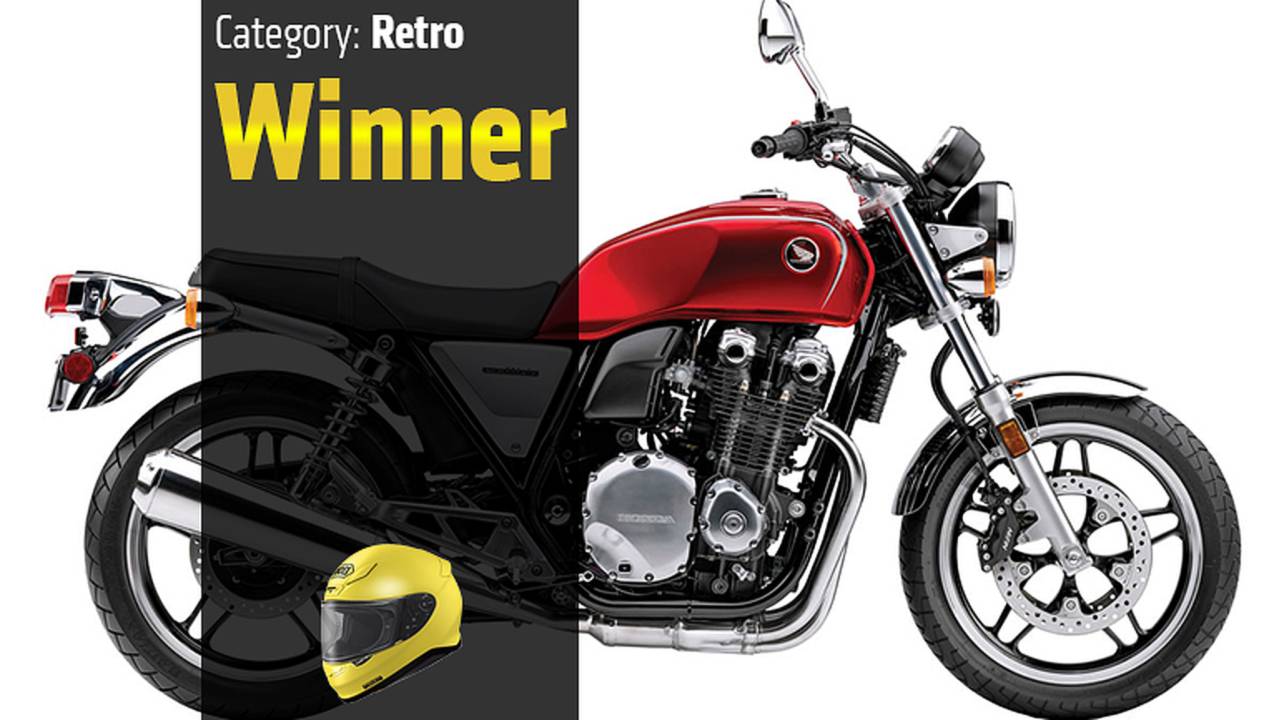 How It Moves The Needle: Honda reminds the world why simple, air-cooled, inline-fours put everyone else out of business with a retro that’s as characterful and passionate as it is capable and practical.

Why We Chose It: A refreshing reminder that Honda has as much soul as it does efficiency, the CB1100 is just a lovely, evocative bike to get around on. 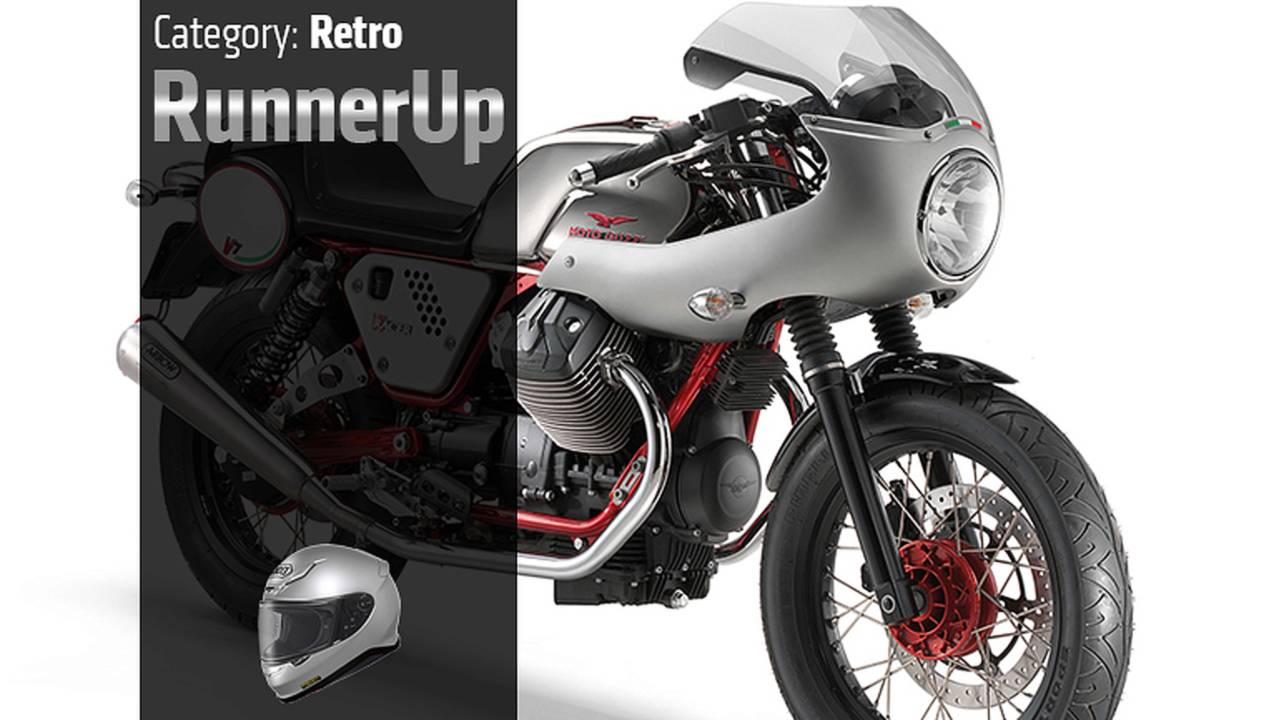 How It Moves The Needle: The nicest looking bike you can buy right now, the Record is basically an add-on kit for the already swanky V7 Racer incorporating the fairing, seat and pipes. 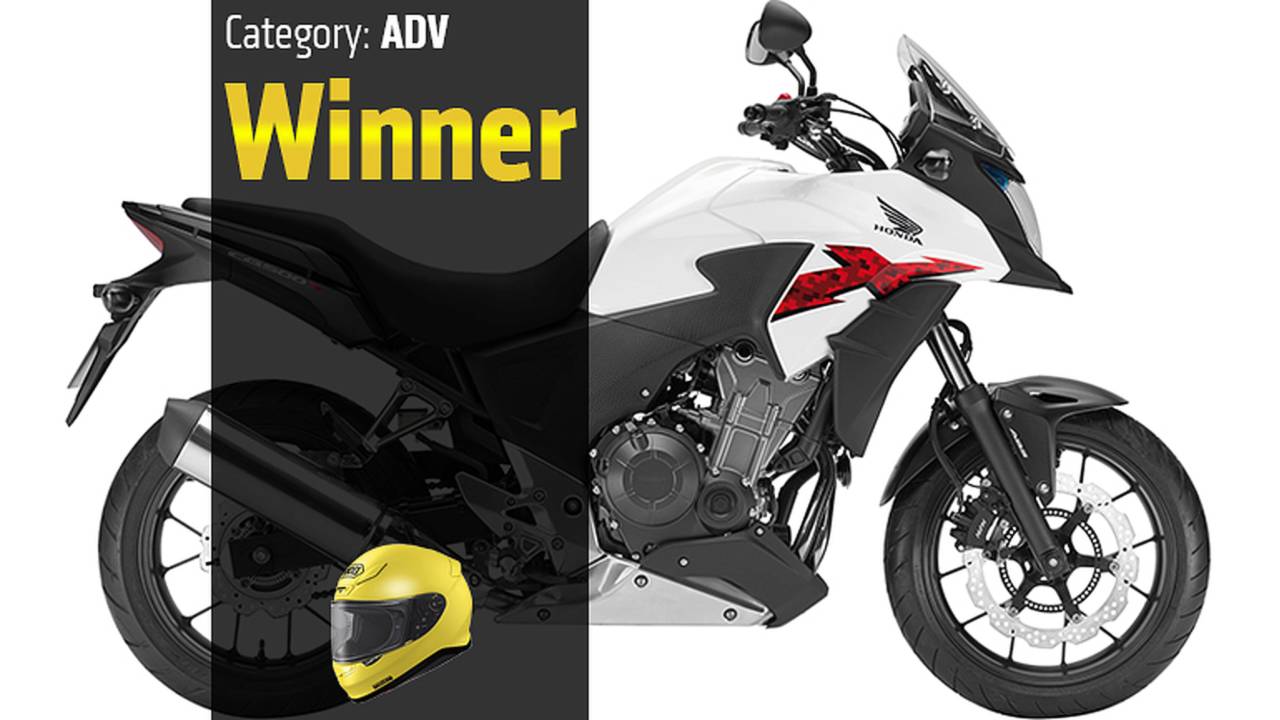 How It Moves The Needle: For $6,000 you get all the bike anyone could ever need. It’s better in the city than any other ADV bike, better in the canyons and just about as comfortable on the highway.

Why We Chose It: It makes bigger ADV bikes look positively silly. None of them are terribly capable off-road and this is one of the few that isn’t just a dressed-up touring bike. It works way better in the real world for most of today’s riders. 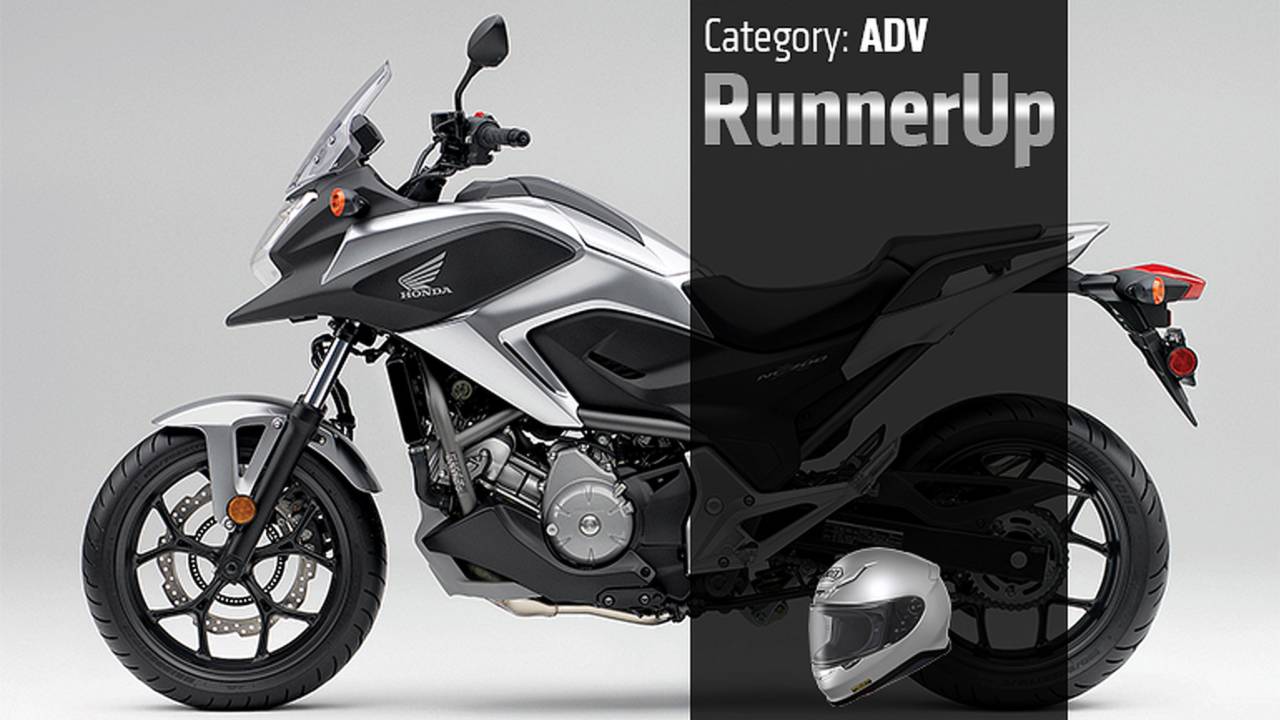 How It Moves The Needle: Diesel-like low-down torque and fuel-efficiency combine with an unprecedentedly low center of gravity to create an exceptionally easy riding experience. That makes taking it off-road as easy as riding it around town.

Why It Didn’t Win: The cheaper CB500X lacks the torque, the onboard storage and isn’t quite as frugal, but it’s more fun to ride and $1,500 cheaper. 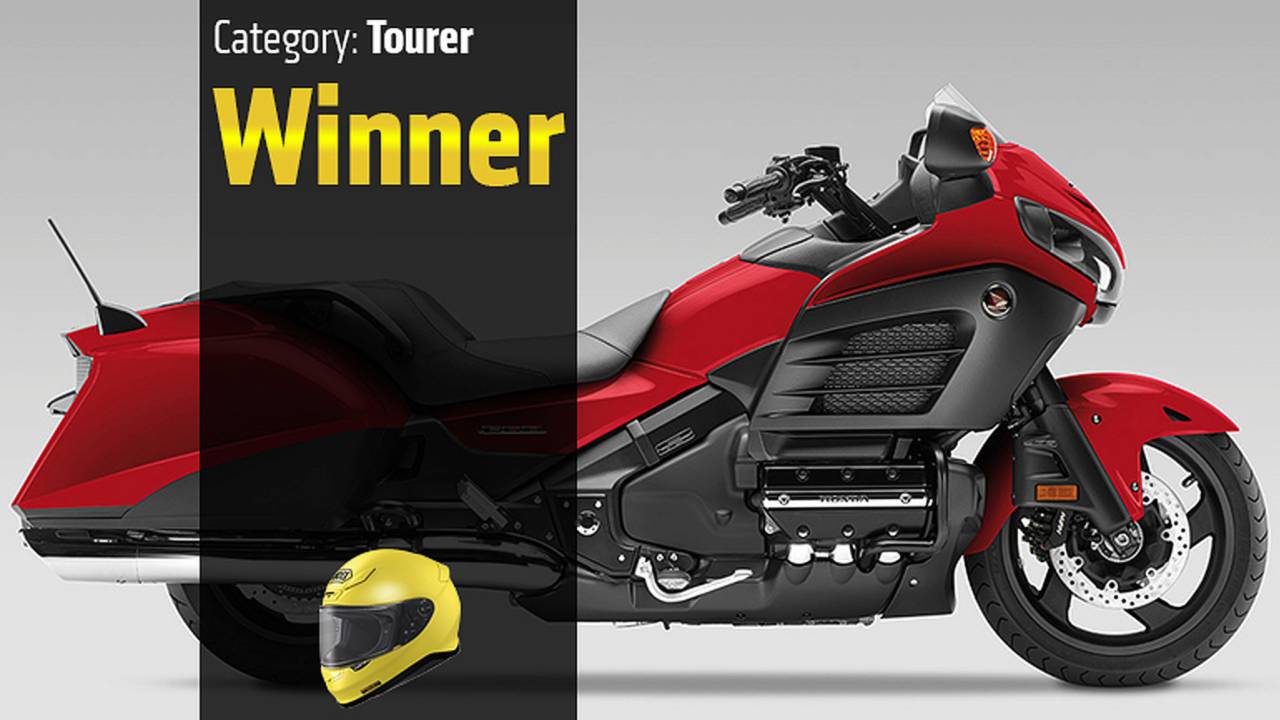 How It Moves The Needle: Takes the Gold Wing platform and makes it more comfortable, better handling, faster and lighter.

Why We Chose It: We’ve never gotten used to looking through a windscreen and prefer a screen arrangement that directs windblast over our shoulders while leaving the helmet in clean air. That’s what the F6B does best. 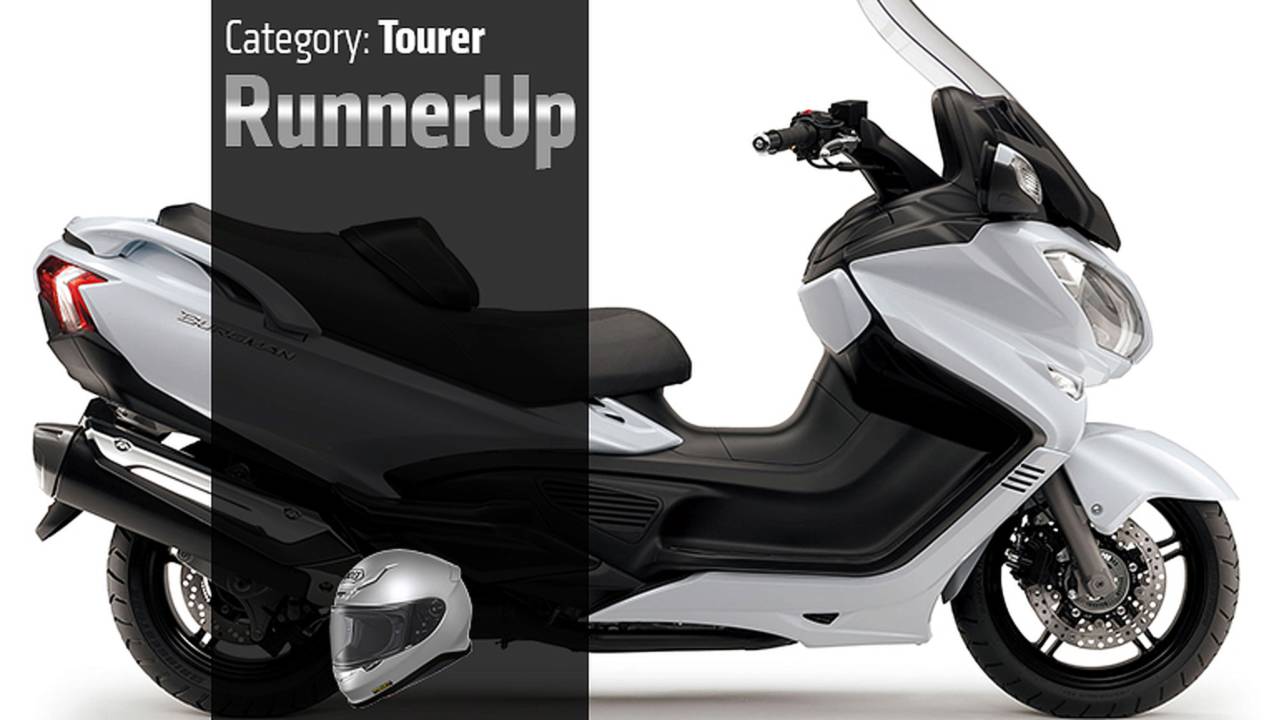 How It Moves The Needle: 90 percent of the distance ability of a Gold Wing in a lighter, more affordable, much easier to use package.

Why It Didn’t Win: The small wheels and very low center of gravity lead to low-speed awkwardness and, well, it’s a scooter. 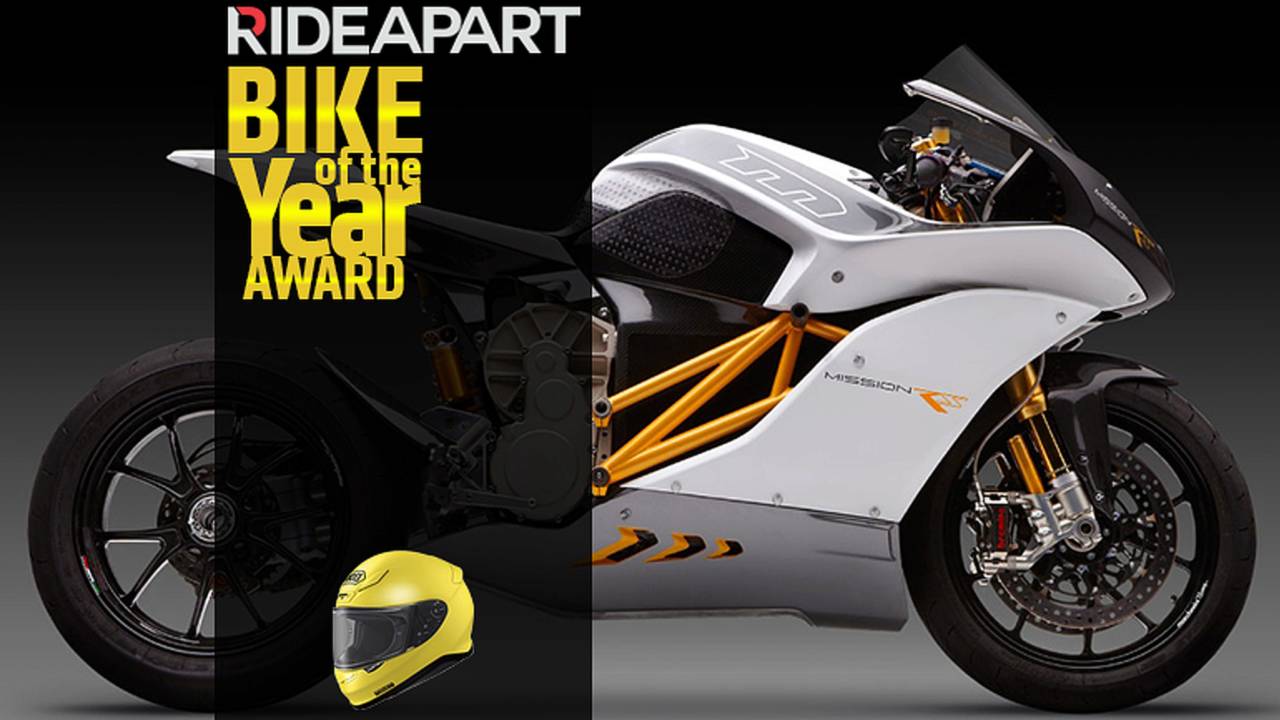 RideApart Bike Of The Year

How It Moves The Needle: 2013 will be remembered as the year the motorcycle world changed forever. Why? With the Mission RS, electric power became a superior performance solution to internal combustion engines. It’s not just faster, it delivers much greater feel, more stability and faster steering than any ICE rival, too. Sure, it’s expensive, but progress costs money. 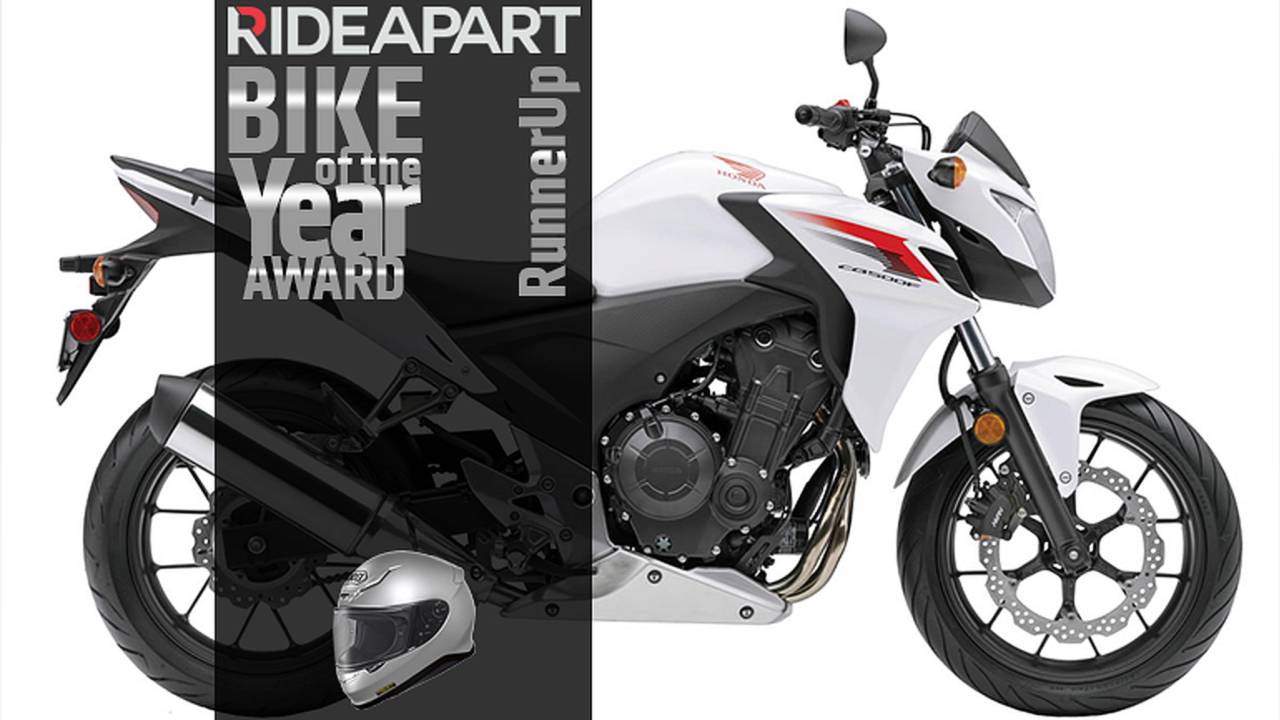 How It Moves The Needle: Unrivaled capability at an unmatched price. For just $5,500, the CB500F delivers a bike that’s accessible to new riders, but fun to ride for experienced guys/gals too. It’d make a great first bike, a great budget commuter or just a good all-rounder for anyone on a budget.

Why It Didn’t Win: It’s just not quite fast enough to really capture our enthusiast hearts.

What is your pick for Bike Of The Year?