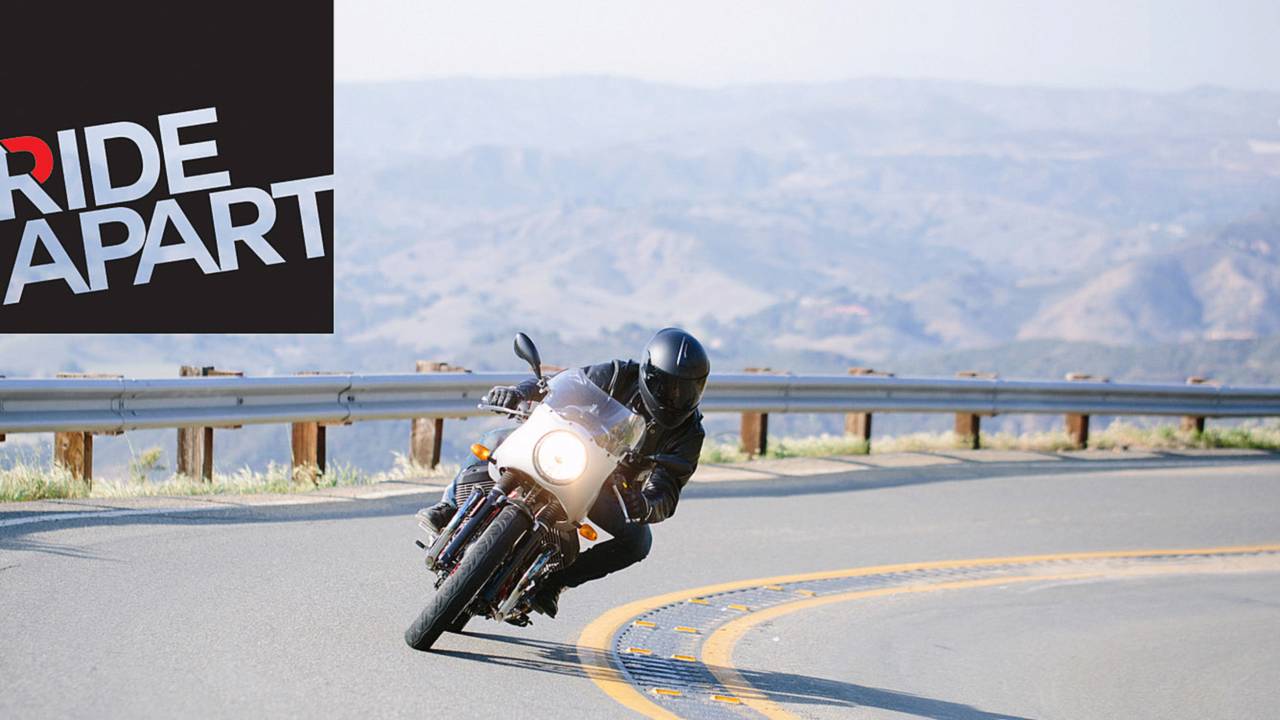 Believe it or not, but the bike I’m riding here wasn’t made in the 1970s. It’s the brand-new, 2013 Moto Guzzi V7 Racer Record. And, while it might look old, has plenty of classic character and ticks all the right boxes in your heart, it’s also reliable, safe and comfortable. The best retro yet?

There are a couple things going on here, so let’s start at the beginning.

First, Guzzi’s V7 range has been comprehensively refreshed for 2013. The engine is 70 percent new and equipped with a distinctive, single, central throttle body. While a power increase from 48 to 50bhp may not sound like much, but it makes that peak power at 6,200rpm, 500rpm lower in the rev range and as much power as the previous model’s peak 1,000rpm lower. That’s a notably more full mid-range. Fuel economy also benefits, now 55mpg the V7’s 5.8-gallon tank delivers an incredibly useful 310-mile range.

Torque increases only a single pound-foot to 44 but arrives at the same, ultra-low 2,800rpm.

Much of that is down to a new ECU, new dual O2 sensors and a new head shape that raises compression from 9.2 to 10.2:1. Pistons are also redesigned to be stronger, without adding any weight.

The look of that engine has also been cleaned up, especially around the valve covers. Broader fins also equal better cooling.

There’s other minor, but still meaningful changes elsewhere too. An aluminum tank replaces the old plastic item, while adding capacity. Wheels, across the range, lose weight, including the spoked items seen on the Racer. Forks remain unadjustable, RWU, 40mm items, but are now equipped with improved damping.

With that Aluminum tank, Guzzi is also importing the chrome V7 Racer to the States for the first time. At $9,990, that model brings a $1,600 premium over the base V7 Stone, but also adds seriously nice rearsets, clip-ons and spoked wheels, as well as stand out design features like the red frame, leather tank strap, numbered badge on the top yoke, billet aluminum throttle body guards and single seat fairing. More substantially, there are also new, remote-reservoir Bitubo shocks.

So far so good? The Record is an add-on kit for that Racer. Retailing for an additional $1,990, it brings the fairing, screen, an all-new single-seat design with a kicked-up tail, plus all mounting brackets to seamlessly integrate the above.

The bike you see here is also fitted with the $1,190 Arrow slip-on exhaust system, which sheds weight and adds power in both the top-end and mid-range, but requires no ECU re-programming. It’s not road legal, but isn’t annoyingly loud.

I’ve been riding the Record around Los Angeles for a couple weeks now. Through heavy traffic, it’s a revelation thanks to the newfound slimness brought by the clip-ons. Power is easy and the performance confidence-inspring, if not hugely fast.

One of the best things about the V7 range is their low weight. At just 394lbs (wet), they’re a full 100lbs lighter than the Triumph Bonneville. While that bike remains a touch faster thanks to its 67bhp, the V7s are lighter on their feet and noticeably easier to push around. That pays dividends for novice and experienced riders alike, there’s simply not a bike out there that feels more natural from the get-go than a V7.

Highway miles brought to light one unexpected advantage of the Record — long range comfort. Sure, the fairing does an admirable job of reducing some wind blast, but it’s really the riding position and seat that make it feel much more modern and comfortable than other models in the V7 range. That seat is hard as a board and narrow, but supports your sit bones in exactly the right position, leading to zero posterior discomfort on long rides. And believe me, I’m sensitive to posterior discomfort right now.

The rear-sets also increase the leverage your legs are able to apply, without cramping them. Ground clearance is also boosted. In fact, I touched nothing down during my time with the bike, something I can’t say about virtually anything else that doesn’t come with at least three Rs in its name.

Clip-ons, too, do a great job of shifting just enough weight forward to aid control, while actually managing to move the ergonomics in a more modern direction, which increases comfort.

And those new ergonomics are what led to the biggest surprise with the Record. Sure, the stock V7 is a fun, broadly-capable little bike that’s more than able to get a little sporty, but headed up Piuma from Malibu Canyon, I found something else entirely. That weight over the front, the new motor, the Racer’s improved suspension and your feet up a little bit turn the Record into a little canyon carver. It’s no 600, but in its own torque, quirky, characterful way, it’s solid fun to ride fast.

I was riding in jeans in these photos, so kept things dialed back, but had I worn some leathers, knee down for these photos would have been no problem. The ergonomics make body position easy and you can get plenty of lean out of the stock tires.

Pulling up at a stoplight next to a guy in race leathers on a GSX-R1000, the bike got an appreciative nod. Doubly so at the next light, after I’d beaten him there through traffic.

The V7’s air-cooled 744cc motor has always been about character, gently plinking as you walk away, but now it’s about smooth performance too. The power band is broad and linear, making progress easy, if not lightning fast.

The Arrow exhausts strike the right balance between engine note and noise levels. You’re not going to set off any car alarms or tell the cops you’re coming, but you are going to feel like you’re riding an honest-to-god motorcycle.

The rear shocks works very well, with tangibly decent damping and the correct spring weight for sporty riding with my 168lbs frame aboard.

Feel through every component is superb, even if capability is somewhat limited compared to a modern race replica. That equals plenty of confidence whether you’re in town, on the highway, or in a canyon.

Every. Single. Time. You climb onboard you will feel like you’re embarking on a memorable adventure. Isn’t that what riding bikes is all about?

The 320mm single front disc/four-piston Brembo/braided steel line front brake sounds decent, but lacks outright stopping power. An upgrade to the pads and maybe even master cylinder is needed if you really plan to ride it fast.

The non-adjustable forks remain overly soft and under damped. Ride quality is excellent, but the bike wants to move around a little too much once you start dialing in Gs.

It’s disappointing that, for $1,190, the Arrow cans aren’t road legal. It’s not as if they’re loud, you get the feeling the budget just wasn’t there to homologate them.

The detailing is a little over the top, making the bike feel a little too self-conscious. A nice brushed finish to the aluminum tank would be less flashy than chrome and the number plates are just over kill.

The clutch is going to be a little on the heavy side for the small-framed women and novices that will otherwise find the V7 absolutely perfect.

Despite the fuel-injection, the first few minutes after cold starts can leave the bike a little reluctant to pull away from a dead stop without big throttle and much clutch slip.

You can’t carry a passenger on what’s surely one of the most provocative-looking bikes out there. Girls will ask for rides. You will have to tell them no.

A stunning bike to look at, strong character and modern reliability make the Record absolutely unique though. These are going to be a rare sight and their owners will be happier for it.

The guys from Guzzi just emailed and told me I have to bring the Record back tomorrow. I’ve got a few, much faster bikes in the garage to replace it, but I’m genuinely gutted to return the V7. It’s memorable in a way most modern bikes just aren’t any more, at least outside those rare, crazy 10/10ths moments.

More fun, more capable and better looking than anything else in the V7 range, the Record is possibly the best looking bike on sale right now complete with finance payments and a warranty and no oil leaks. If you’re looking to recapture a vintage riding experience without the hassle, you can’t do any better than this.