Watson On: A Year Of Promises 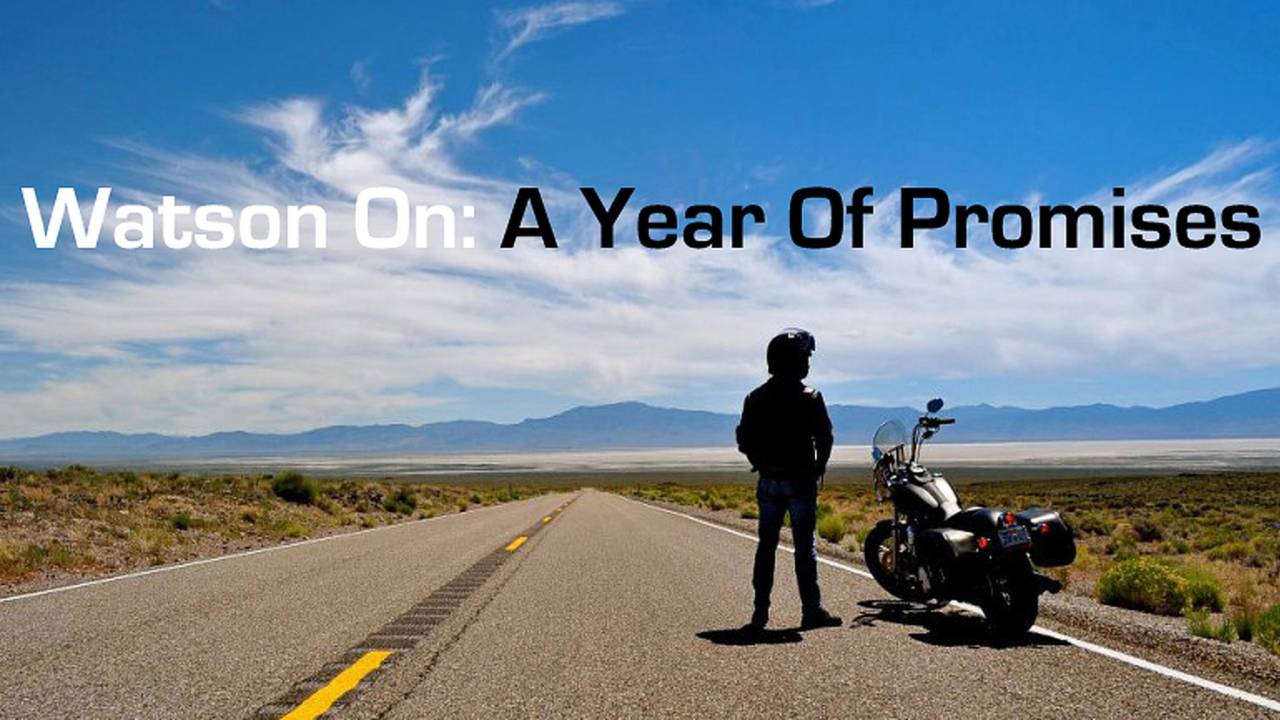 It still January and out of the four motorcycling resolutions and promises I’ve made, I have already broken three. Here's why.

At the start of a new year I always make myself several promises knowing full well that due to time and money I am never actually going to deliver on them.

I‘m always going to take an advanced riders course because I know I have developed some pretty appalling habits; I am always going to upgrade my old Harley-Davidson with a list of parts that I’ve been mulling over for months and months and I am definitely going to buy that second bike. But, I understand that my long-suffering wife may think that bills and having food in the house should probably be our priority.

I am also definitely, definitely going to stop shouting at other road users that cut in front of me and often make my riding in Southern California in general a daily gamble.

I always begin a New Year with good intentions but along the way get distracted and I find that 12 months fly by and before I know it I am staring at Christmas decorations again knowing that I still have not done what I said I would.

This year it really is going to change. No seriously. I have booked my bike in for a service. I’d have done it myself but sitting in my garage is a battered oil filter with a screwdriver stuck in it. I have it on display on a shelf to specifically remind me why I should not pick up tools and attempt things that are way beyond my technical capability.

Though I have found a number of parts for my bike that I have wanted for a long time. I have stopped sitting on the couch starting at catalogs and writing lists of part numbers only to lose the list or change my mind and then start all over again. I have placed orders for gaskets, suspension parts and cables and am now sitting back waiting for them to arrive. What I do with them all when they arrive I haven’t yet decided.

I have also taken a look at the Motorcycle Safety Foundation (MSF) website and have read up on advanced rider courses and what it would entail. My finger has hovered over hitting the button and booking a place, as I know it’s going to be a struggle for everyone involved. The instructor is going to shake his head and question why I have not yet had a serious accident and I’m going to have to face the fact that I am not as good a rider as I think I am.

When my wife has been out of the house I’ve been trawling through websites offering once in a lifetime offers on spectacularly bad old motorcycles for ludicrous amounts of money.

I really, really want a second bike. Something totally different from my H-D and have trawled the Internet looking at Suzuki GS1000’s and Yamaha RD350’s. I’d like something from the 1980’s that will remind me of the stupidity of my youth when we did ridiculous things with motorcycles and heaven knows how, lived to tell the tale.

Or something old and British. I have studied lists of BSA Gold Stars and Norton Dominators and have got all misty eyed over these bikes. I know they will break and bits will fall off them and I’ll rupture myself trying to kick start them, but I’m not a rational man when it comes to motorcycles.

I know they will leak oil and I’ll have a devil of a job trying to find an elusive part, but I have a space that’s been reserved in my garage for several years now specifically for this second bike. Maybe 2014 will finally be the year I bite the bullet and find out what it really is like to live with the bike of your dreams.

I did venture out a couple of times over the Christmas period to ride. I get withdrawal symptoms if I haven’t ridden at least several times a week. It was possibly the worst decision I could have made. Everyone was in Christmas mode all going somewhere too quickly and oblivious of everything apart from getting to the shops or the office party on time. While the traffic and driving in Southern California is some of the worst that I have experienced anywhere in the world, between Christmas and the New Year it revs up to a new level.

When the guy with a cell phone clamped to his ear in the big Toyota truck pulled out in front of me and I had nowhere to go but the middle of the road, I’m embarrassed to say I started shouting vulgar oaths again. In less than a day I had broken one of my New Year’s resolutions. I will try harder this week I promise and keep my big mouth shut.

Out of the four resolutions I’ve made, so far I have kept one. My Harley gets new parts. Give me a break though if I haven’t done the other three by some point this year and then at that time, you have my full permission to shout at me.

What are you planning to do with your bike in 2014?