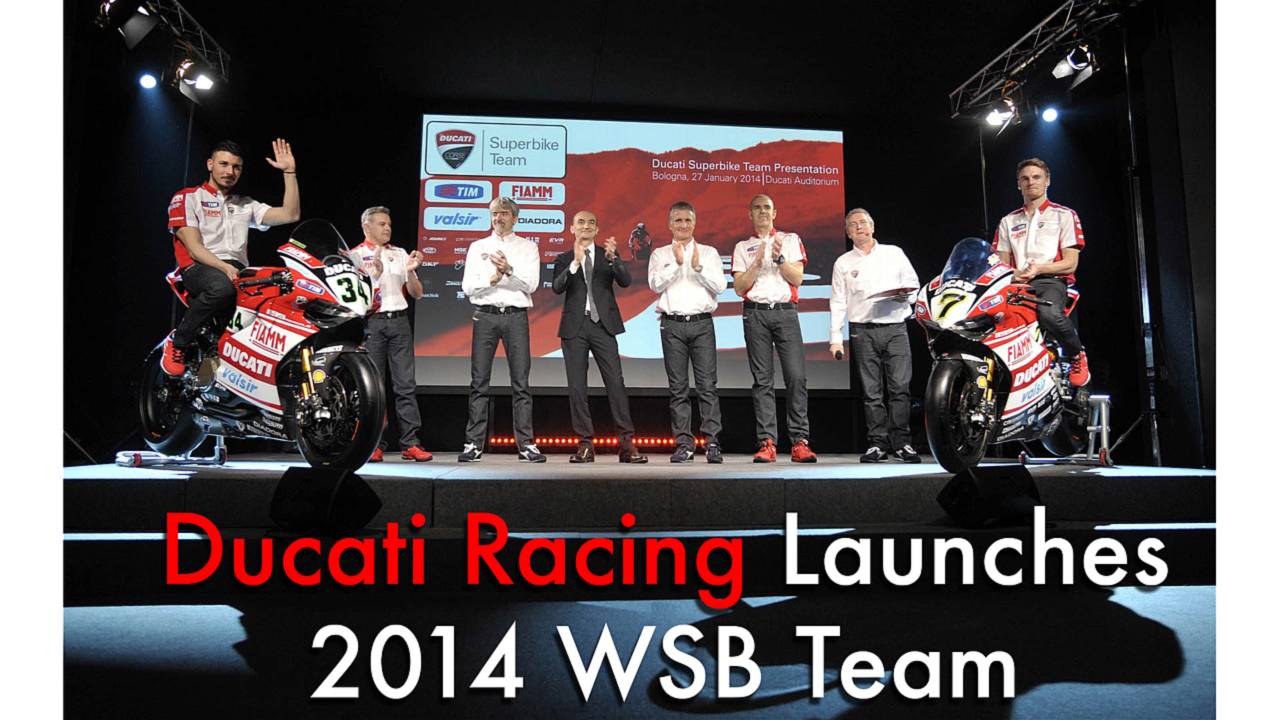 With just a few weeks until the season opener of the 2014 FIM World Superbike Championship at Philip Island, in Australia on February 23, Ducati racing has officially presented its team, riders and bikes.

Ducati has won the series 31 times with 17 rider titles and 14 manufacturer championships. At its Bologna factory it officially launched the 2014 team and the Ducati 1199 Panigales they will ride.

The 2014 Ducati Corse riders are the hugely experienced Welshman Chaz Davies, who ran with BMW last season and took fifth place in the championship, and Italian Davide Giuliagno. Both Ducati Panigales will carry new racing livery for this season that includes the team’s new sponsors – Telecom Italia Mobile, Fiamm, Valsir and Diadora.

Heading the Ducati Corse team is Luigi Dall’Igna who told the media at the team’s launch: “The results of the latest tests are encouraging. Both riders were able to record important lap times but more important is the fact that their comments regarding the bike have been positive. This is a key factor, especially in view of the experience they have accumulated in recent seasons and the fact that both were riding bikes of reference until just a few months ago.

“They are together providing us with the feedback needed in order to develop the 1199 Panigale in the best possible way. There is of course a lot of work still to do but I am confident and optimistic and believe that over the course of this coming championship we will get the bike back to where it deserves to be.”

David Giugliano, who finished 9th in last year’s WSC with Aprilia, previously raced for Ducati in the 2011 and 2013 seasons. Giulgliano says he is returning with high hopes for 2014 and added:  “My new Panigale is something amazing, a bike that immediately feels like mine and with which I’m immediately in tune. I’m very pleased with how the bike is developing and so this is already very positive.

“Chaz is undoubtedly a great rider, a great talent and this season he will surely be one of my toughest rivals but I know that we’ll work together and will encourage each other to always do our best. We also owe it to the fans of course, as we want everybody who has always followed and supported Ducati to have fun and enjoy the results! I’m more than ready to get going and can’t wait to start the championship."

Manufacturers in this year’s WSC also include BMW, Kawasaki, Honda, MV Agusta, Aprilia, Suzuki, Bimota and U.S.-entry Hero/Eric Buell Racing with a pair of 1190 RX’s for American riders Aaron Yates and Geoff May.

The FIM 2014 WSC visits the U.S. on July 12 at Mazda Raceway Laguna Seca. The rest of the calendar is as follows: