Seems like it may have been a long winter for the ICON folks in Portland, Oregon, as they have commissioned yet another custom motorcycle and filmed it again in a suitably evocative setting. The Icon Speedmaster is a unique take on an old-school dragster. 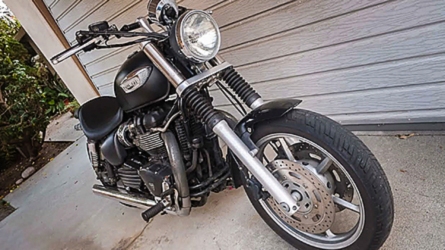 Customizing A Triumph Speedmaster: How Hard Could It Be?

Built by ICON Motorsports the Speedmaster is the third project Triumph motorcycle that apparel company ICON has made in recent years. This latest creation, the ICON Speedmaster, has been designed to pay homage to the Triumph motorcycles of the 1960s that were dominant on the U.S. drag racing strips during that era.

ICON’s Speedmaster is based on a 2013 Triumph Speedmaster but of course has been suitably modified. There are fork mounted nitrous oxide bottles to double the engine’s horsepower, a bespoke Vance & Hines exhaust and Latus Motors Triumph has tuned the engine.

Triumph Tiger 800XC wheels have been fitted along with a period correct drag slick, and an Avon Speedmaster front tire. There are modern piggyback rear shocks from Progressive and a one-off custom seat by New Church Moto.

As always ICON has spent some considerable time and effort producing a really slick video showing it's latest custom built motorcycle, interspersed with some great contemporary U.S. drag racing footage. There are also some sneak peaks of ICON 1000 gear if you keep your eyes peeled. Expect to see that for sale later this year.