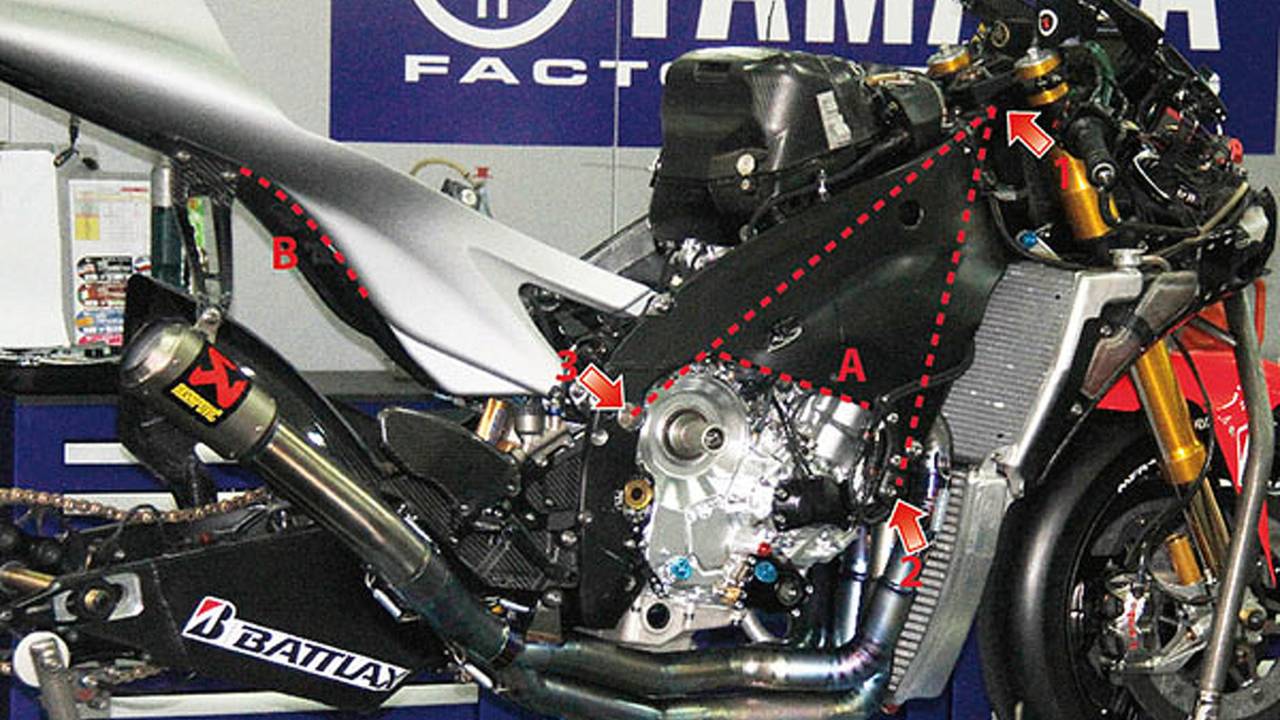 What's the deal with the Yamaha M1's new triangle frame?On Tuesday, Italian site GPOne snagged a image of the 2013 Yamaha YZR-M1 sans-fairing. That...

On Tuesday, Italian site GPOne snagged a image of the 2013 Yamaha YZR-M1 sans-fairing. That revealed an entirely new frame arrangement that departs from the traditional twin-spar aluminum affair or "Deltabox" as Yamaha, which helped pilot the design, calls it. What gives? We asked a MotoGP designer.

"From what I can tell, this is just a further evolution of the basic double beam design favoured by Japanese manufacturers since the '80s," explains that designer, who prefers to go un-named.

The 2006 YZR-M1 employed a much more traditional aluminum beam affair.

"In any structures design, you want load paths to follow the shortest, most direct route. In first generation Deltabox design, the tall and wide motors of the day required the frame beam to either (a) curve significantly outward (along the Y or lateral axis), or (b) be L shaped, with a vertical member rising up from the swingarm pivot to meet the longitudinal spar coming back from the head pipe."

The red line demonstrates the load path through an old FZR750's Deltabox frame. That left turn over the swingarm pivot is far from ideal, but necessitated by packaging the tall, wide inline-four.

"As motors became more compact and engine architecture evolved, such as shortening them by stacking gears and crankcase, the angle between the longitudinal beam and vertical member decreased, shortening the load path."

"This M1 suggests that Yamaha has gotten closer to the ideal, which is a beam structure that goes in a straight line from head pipe to swingarm pivot."

"This image of the '13 M1 says more to me about the engine and gearbox than it does about the frame. "Clearly Yamaha has been able to make the most of the computational analysis tools available now to build the best packaged 1000cc inline-4 in history, and craft an ideal frame for it. The picture I want to see is of the motor and transmission..."