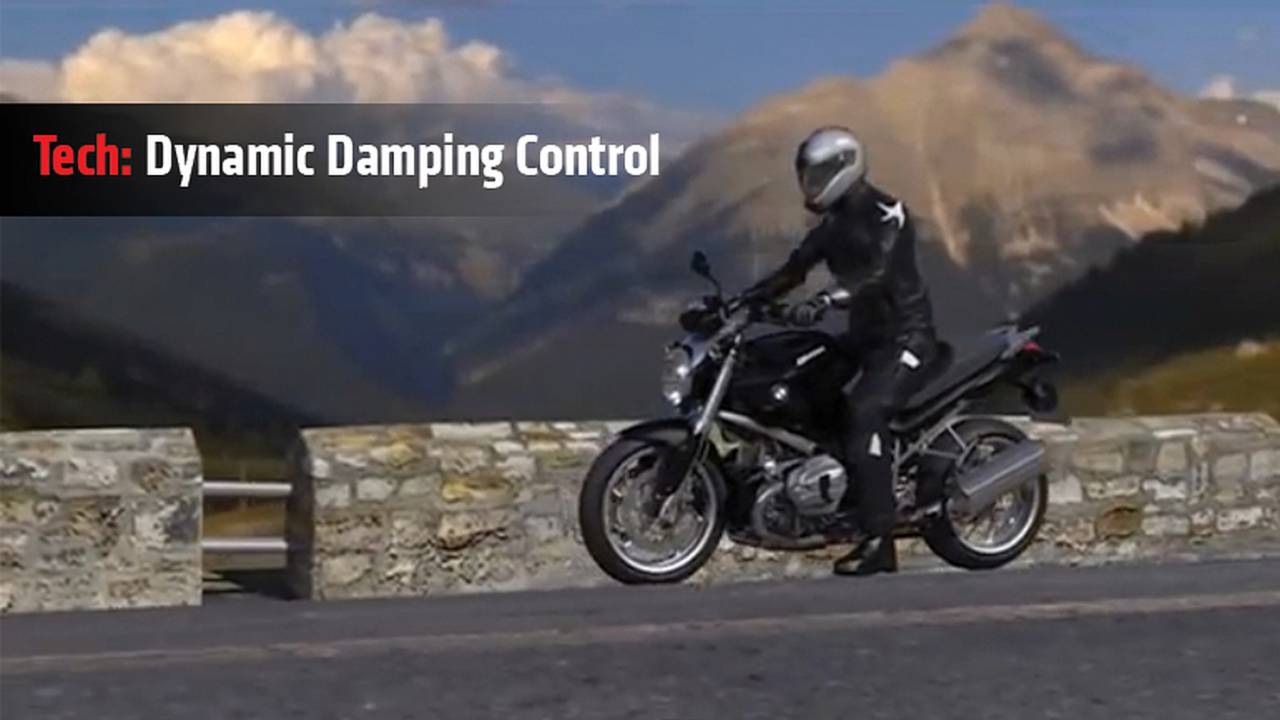 BMW Dynamic Damping Control is broken down thanks to this video from BMW Motorrad.

As motorcycle technology progresses further into the world of binary, what do we have to look forward to? ABS is fast becoming standard on all new bikes, with traction control not far behind. How about semi-active suspension? It’s technology that allows a motorcycle to quickly alter the suspension to better suit varying road conditions in mere milliseconds. Is it magic? How does it actually work?

Most motorcycles make do with static suspension, meaning that the suspension settings are dialed in for a wide range of scenarios. We want to be able to manage low speed potholes downtown, high speed bumps on the highway, and everything in between. Of course, these settings also account for all of the the extremes of accelerating, braking and cornering in the moment. The problem with static settings boils down to the inherent compromise between performance and comfort. This careful balance can position a bike as a jack-of-all-trades: competent, but not outstanding in any particular area. So what happens when we want to dynamically adjust the suspension to any road scenario as it happens? This is where semi-active suspension comes in.

The basic theory here is the same, even though the implementation can be different. Sensors on the suspension, chassis, and engine relay information to the bike’s ECU. This information is interpreted by the ECU as one critical factor, that being the change in suspension travel distance and the speed in which it happens. The ECU then determines the proper amount of suspension damping required to negate the unexpected forces from the road surface, and sends an electrical signal to the suspension components, which adjust damping to suit. This entire process occurs in a few milliseconds, with the ECU readjusting as new data comes in just as quickly.

This tech isn’t just useful for absorbing the occasional bump in the highway commute, but rather a constant assistant in day-to-day riding. Imagine needing to stop suddenly as a car unexpectedly pulls out in front of you. You roll off the throttle and quickly apply the brake. Throttle position sensors, braking, and suspension accelerometers all detect a forceful application of brakes. The ECU sends electrical signals to the front suspension to increase damping and the rear to decrease damping. This combats front end dive and offsets the sudden forward weight transfer by helping plant the rear tire for additional traction. Something similar happens during hard acceleration, but in reverse. The rear damping needs to be increased to stabilize the rear tire, and the front damping decreased to ease the weight distribution to the rear. The same principles apply to cornering, where the suspension components alter damping to compensate for the g-forces placed on them while turning.

The end result of a stabilized suspension is a simple goal, but the implementation varies greatly among manufacturers. Manufacturers use a mix of accelerometers (detecting changes in speed of suspension component movement), potentiometers (detecting changes in the position of components), throttle data, brake data, ABS/TC data, dedicated ECUs, and sensors that detect changes in fluid/gas pressure to form a complete picture of suspension activity as it happens. BMW offers semi-active suspension on their range-topping R1200 GS and HP4, with their DDC (Dynamic Damping Control) system. The DDC system uses potentiometers to determine the position of the suspension and the rate at which the suspension is compressing or extending. Using this and data from the ABS/Traction Control system, the ECU affects changes by way of proportional damping valves located inside the suspension that occur so quickly they can be measured in single digit milliseconds.

Ducati has engineered a different input criteria with their DSS (Ducati Skyhook Suspension) system. DSS employs four accelerometers on the sprung and unsprung components of the bike. These are located on the front wheel and front part of the chassis, and have a similar arrangement on the rear. By interpreting wheel movement in relation to chassis movement, the ECU can calculate the changes in the suspension travel. Using preset algorithms, the ECU picks a hypothetical point above the bike and calculates what is required by the suspension in order to keep the chassis level in relation to that point. Recalculations occur 250 times a second, providing constant adjustments to the suspension for any setting

Aprilia uses a similar system to the DSS system on the Caponord, but with a potentiometer on the rear shock and a pressure sensor on the fork legs. Ohlins has joined the market offering an aftermarket option (as a rear shock and only for 3 years of the ZX-10R so far), which can quickly change settings using small stepper motors on the compression/rebound adjusters. Instead of using traditional sensor setups, the system relies on engine data from the bike ECU which is then passed through a dedicated Ohlins ECU to determine on the fly adjustments.

What makes semi-active suspension so interesting is how usable it can be no matter what sort of motorcycle you have or what kind of riding you do. It’s a system that can rapidly reorient its parameters for track days, commutes, touring, offroading, canyon carving, and just riding in general. Unlike other recent upcoming standards in motorcycling, the use of semi-active suspension isn’t limited to just one role like safety (ABS) or performance (quickshifter). The benefits encompass performance, safety, comfort, and ease of use that can all be had faster than the blink of an eye.

Do you have semi-active suspension on your motorcycle?

If so, have you noticed a perceptible difference in the dynamics of your riding?